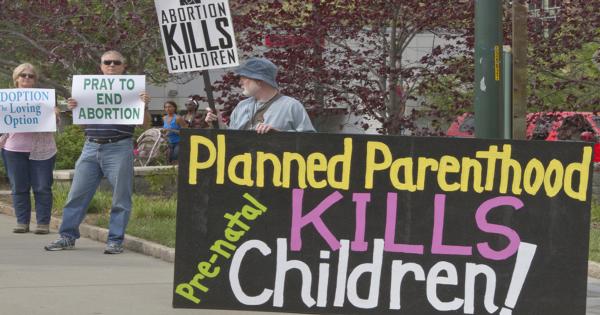 The Students for Life (SFL) chapter at Whitworth University is challenging the Christian school’s relationship with abortion provider Planned Parenthood.

Chapter vice president James Silberman launched the crusade with an op-ed earlier this month in The Whitworthian, noting that Whitworth lists Planned Parenthood as one of its “community partners,” which enables the organization to recruit students at the school’s annual Volunteer Fair and offer accredited internships.

“Whitworth is telling their students that killing an innocent baby is morally permissible.”

Silberman argues that maintaining such ties to the nation’s largest abortion provider is unambiguously wrong, and calls on the administration to not only end its association with PP, but also to publicly repudiate “the bloodshed” that the organization facilitates, saying, “Whitworth trustees, administration, and applicable faculty have a responsibility to take a stand on the issue of abortion and Planned Parenthood.”

SFL endorsed Silberman’s campaign in a blog post Tuesday, strongly objecting to the ubiquitous presence of flyers put up on campus by the school’s Student Success Center that direct pregnant students to contact Planned Parenthood.

The blog post also notes that Whitworth also hosted a “fetal tissue research event” last March, the description for which cast doubt on the authenticity of undercover videos showing Planned Parenthood officials negotiating the sale of fetal tissue, even though SFL claims that the videos have been authenticated by two forensic studies.

“We are asking our supporters to call and email the school administration to ask that they cut ties to Planned Parenthood and promote life-affirming resources instead,” SFL stated in a press release, encouraging supporters to contact the school’s Provost and Associate Provost using the phone numbers and email addresses provided at the bottom of its blog post.

Kristan Hawkins, President of Students for Life of America, expressed pride in the student-led effort, saying it reflects the strength of pro-life values among today’s college students.

"Yet another Christian university is failing to promote our shared pro-life values amongst its students and would rather throw their Christian identity in the trash than cut ties with the nation's largest abortion vendor, Planned Parenthood,” Hawkins told Campus Reform. “There is no reason whatsoever that a self-proclaimed Christian school of higher education should be partnering with them.”

“These schools should be providing a foundation for well-educated students in not only the traditional subject matters and majors but also in moral issues, including abortion, the direct taking of innocent life,” she argued. “In partnering with Planned Parenthood, Whitworth is telling their students that killing an innocent baby is morally permissible and doesn't contradict the Christian faith.”

"I'm not asking Whitworth to become a Bible college, and I understand why they would avoid taking sides on political issues, [but] this is not just any political issue," Silberman told Campus Reform. "It is an issue of immense violence and human suffering. A Christian institution refusing to acknowledge the inherent value of human life is moral cowardice, and their actions which appear to support this violence [are] heinous."

Campus Reform reached out to Whitworth University for comment, but did not receive a response from either in time for publication.