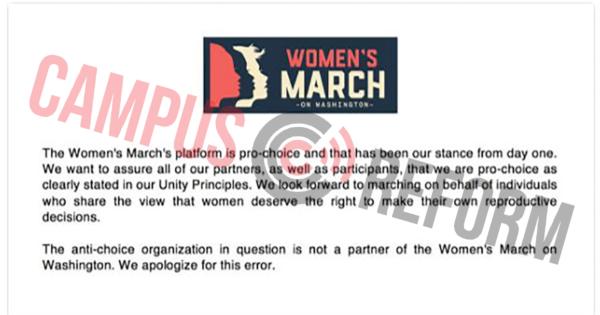 A Catholic university in Minnesota plans to bus students to both the state and national Women’s Marches on Saturday despite the anti-Trump movement’s explicit pro-abortion stance.

In fact, the “Luann Dummer Center for Women” at the University of St. Thomas (a private, Catholic school) recently announced that it would be “hiring a bus for UST community members” who wish to attend the Women’s March at the state capitol.

“The Women’s March platform is pro-choice and that has been our stance from day one.”

Meanwhile, the Catholic school will also be providing an overnight bus to the national march in Washington D.C., which will not only be sponsored by the school’s Center for Women, but also its Division of Student Affairs.

Indeed, the Center for Women noted in a recent Facebook post that it, “in collaboration with Student Affairs, has six tickets available for the bus ride to DC for the Women’s March on Washington on January 21, 2017,” and encouraged students to apply by submitting a one-page essay summarizing how they “plan to integrate [their] participation into [their] UST experience upon return.”

“Please note: while tickets will be covered, students will be responsible for food and other incidentals,” the Facebook post advises interested students. “Since the bus trip is overnight, participants may sleep on the bus.”

Yet the Women’s March, variations of which are occurring in nearly every state, has unabashedly promoted a pro-choice platform, and even openly condemned any pro-life participants as “not a partner of the Women’s March on Washington.”

“The Women’s March platform is pro-choice and that has been our stance from day one. We want to assure all of our partners, as well as participants, that we are pro-choice as clearly stated in our Unity Principles,” organizers clarified in a recent statement after the protest group faced backlash for seeming to collaborate with a pro-life feminist organization.

“We look forward to marching on behalf of individuals who share the view that women deserve the right to make their own reproductive decisions,” the statement continues. “The anti-choice organization in question is not a partner of the Women’s March on Washington.”

Moreover, as the March organizers reiterate, the event’s official platform calls for uninhibited access to “safe, legal, affordable abortion and birth control for all people.”

“We believe in Reproductive Freedom. We do not accept any federal, state, or local rollbacks, cuts, or restrictions on our ability to access quality reproductive healthcare services, birth control, HIV/AIDS care and prevention, or medically accurate sexuality education,” the group’s Unity Principles state, making perfectly clear that “this means access to safe, legal, affordable abortion, and birth control for all people, regardless of income, location, or education.”

Likewise, the official platform of the “Sister March” in Minnesota mimics the Unity Principles of the national Women's March on Washington almost word-for-word, noting that it will “not accept any federal, state, or local rollbacks, cuts, or restrictions on our ability to access quality reproductive healthcare services, birth control, HIV/AIDS care and prevention, or medically accurate sexuality education.”

To top it off, the co-chair of the Women’s March on Washington, Linda Sarsour, doubled-down on her group’s pro-choice stance, naming access to abortion and the continued federal funding of Planned Parenthood as one of her main priorities in a recent interview with MSNBC.

“First of all, hands off the Affordable Care Act. We need our health insurance,” she declared, along with, “Hands off Planned Parenthood and our reproductive rights.”

Nonetheless, it appears UST will move forward with its plans to participate in the March, as the Director of the Center for Women, Young-ok An, explained to Campus Reform that the Center’s “advisory board collectively decided to provide information and resources regarding the Women’s March” after “hearing, from many students, faculty, and staff of the university, their wishes to participate in the event, to affirm the principle of equal rights and dignity of women, along with those of people of color and of different faiths.”

“The march is gender-inclusive and celebrates women's history, accomplishments, and future,” she asserted. “The Women's Center hopes to provide an educational opportunity for those who wish to be part of the historic event and reflective of ‘Women Who Made History.’”

Notably, when the small, Catholic school was exposed in 2014 for allegedly offering internships at Planned Parenthood and NARAL, UST President Julie Sullivan explained that links to such potential internships “were published in error on the website of our College of Arts and Sciences, and they are being corrected,” explaining that student internships “are approved through the Office of the Dean,” but that “the dean has not approved, nor would he approve, academic credit for internships at Planned Parenthood or abortion organizations.”