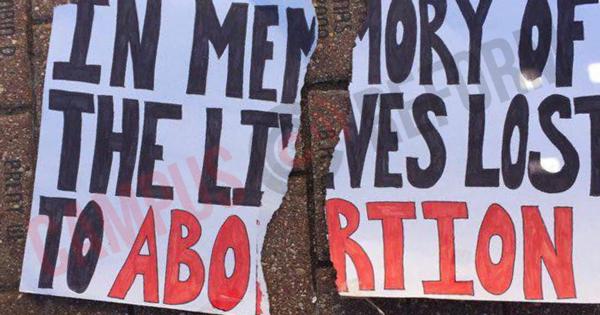 The George Washington University’s Young America’s Foundation chapter was met yesterday with pro-choice protesters at their Cemetery of the Innocents display.

The pro-life display, which commemorated the lives lost to abortion, contained around 200 white crosses that members set up around 7:00 AM. Joining them were a group of sign-carrying pro-choice protesters, many of whom posed jokingly with YAF’s “In Memory of the Lives Lost to Abortion” sign.

“If you have something growing in your body without your consent, that’s a parasite—not a pregnancy.”

A pair of students ripped YAF’s sign in half and attempting to walk off with it. Other counter-protesters pulled the crosses up from the ground or verbally berated the pro-lifers with expletives.

Two of these protesters had their names taken by GW’s Police Department and were permitted to leave the scene. The protester who ripped up the sign was confronted by a co-president of GW YAF, Shannon Bell, who filmed her responses.

When questioned by Bell as to why she destroyed the group’s sign, the protester responded “Because you’re not letting people have the choice over their own bodies."

Bell refuted her claim, stating that their actions were ignorant of the fact that the space was reserved and approved by GW, and that YAF is a “GW sanctioned organization," as well as questioning whether she should call GW’s Police Department.

“Well, we didn’t know that it was protected by [it],” the other protester claimed.

“What makes you think that you can just rip up something you don’t agree with? Why can’t I have the free speech to give my opinion?” Bell questioned.

“Well I guess you can,” the protester admitted, adding that they ripped the sign because “we didn’t see that someone was here to defend it."

“Well who the f*** are your board members? They have nothing to do with me,” another protester screamed at co-president Brandon Whitehill, after explaining that the organization’s board members have varying pro-life beliefs.

A GW Center for Student Engagement official attempted to stop the verbal attack on the students, stating that “these are my clients” and “they have a right to be here," to which the protester walked off, screaming “f****** as****** ."

She then turned around, got in the face of Bell, who was recording the video, and flipped her off screaming “F*** off b****, I’m fighting for you."

In a separate incident, YAF executive board members spent their time between classes fixing the crosses that had been ripped from the ground by two angry female students walking by.

Mia Wright, one of the YAF members, told Campus Reform that she went up to the women tearing down the display, asking why they were destructing GW property.

“They immediately launched into ‘this display is sexist and is not inclusive and it’s racist and it’s misogynist’ and basically all of the liberal buzzwords that you’d expect," Wright said.

Protestors from GW’s Voices for Choices organization protested about 30 feet from the display, holding signs that included phrases such as, “If you have something growing in your body without your consent, that’s a parasite—not a pregnancy” and a coat hanger saying, “they’ll happen anyway." 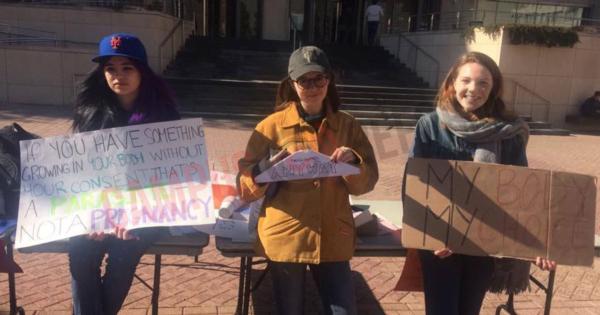 Days before their planned counter protest to the pro-life display, the group sent out a message to members detailing them only to repeat the following statement when speaking with media:

“I support the constitutionally protected right to abortion and bodily autonomy for all people. Access to reproductive care is a crucial right I support and I refuse to shame those who seek it.”

They also held a scheduled meeting to create posters for the demonstration.

The Voices for Choices members lingered next to the pro-life display, waiting for the YAF members to take it down. When they began to disassemble the crosses, many members clapped and danced, while stating “Watching white men tell women what to do with their bodies," in a taunting video.

Shannon Bell told Campus Reform that the group’s intent was to “start a dialogue on a very liberal college campus," adding that, “while some have been more hostile than others, some people have come up to us to have a meaningful conversation about an important issue ."

“GW is extremely liberal and politically active, so if you do anything there’s definitely going to be pushback,” Bell added. “It seems that every time we do something related to conservatism, the student body gets angry...and it’s funny that when there’s a progressive demonstration there is no pushback ."

Several members of the organization say they reached out to university officials on social media to express their concerns, but have yet to receive a response.

GW YAF members said they will be monitoring any possible disciplinary action from university police for the students who wrecked the display.

When contacted by Campus Reform for comment, the university gave the following statement:

“All individuals have the First Amendment right to express their views in a peaceful manner. We urge students to act in a manner that is civil and respectful to the diverse opinions they may encounter. We do not condone the conduct of a few non-GW community members who yelled at the students for peacefully expressing views. Destruction of property is a violation of university policy. We are working with YAF leadership to determine if they want to pursue further action.”

However, GW YAF also told Campus Reform that no GW official has contacted them since the initial police report yesterday to determine if they want to pursue further action.