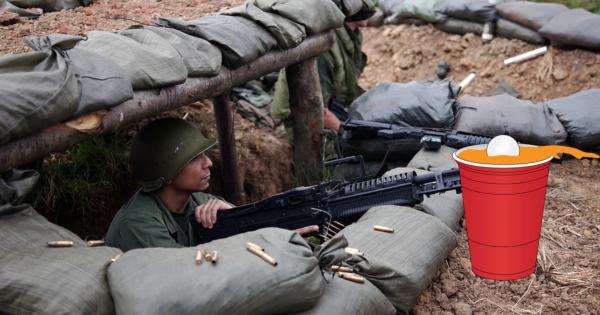 The University of Pennsylvania’s Interfraternity Council is adding a “diversity chair” to its executive committee in response to a fraternity member naming his beer pong team “VietPong.”

At a date night in February, a member of Phi Gamma Delta (FIJI) and his date named their beer pong team “VietPong” and wore camouflage with war paint on their faces, according to The Daily Pennsylvanian.

“The political background and attire associated with the Viet Cong should not be treated as a joke.”

“The political background and attire associated with the Viet Cong should not be treated as a joke and adorned so casually,” said Vietnamese Student Association President Nicole Phan. “The ignorance of our history is representative of the overarching issue of stereotyping and misrepresenting the Asian community without consequences.”

“VietPong” is a play on Viet Cong, the guerrilla army that fought with North Vietnam against the United States during the Vietnam War.

“As much as this institution praises itself for diversity, it's incredibly disheartening how often incidents occur on campus that trivialize and marginalize the history, culture, and existence of minority communities,” the UPenn Asian Pacific Student Coalition wrote in a Facebook post, vowing that Asian and Pacific Islander students “will continue to push back hard against any and all incidents of racial insensitivity.”

The Vietnamese Student Association condemned the beer pong team as well, declaring that “Penn VSA refuses to stand by and allow cultural ignorance to propagate on this campus,” adding that “what transpired this past weekend was insulting to not only our Vietnamese history and culture, but our identity.”

The fraternity member wrote a letter to the APSC and the VSA apologizing for his actions, but the Interfraternity Council nonetheless felt compelled to take matters into its own hands by establishing the as-yet-undefined role of “diversity chair” to oversee Greek life at UPenn.

“We’re still figuring out what the responsibilities would be and how it will work, but after the FIJI incident we are looking towards accelerating the introduction of a diversity chair position,” IFC President Bradley Freeman told The Daily Pennsylvanian.

Freeman also said he is interested in publicizing attendance of mandatory sensitivity presentations for fraternities “to make sure chapters are held accountable for their actions,” saying, “Student bodies have the right to know ‘Chapter X’ showed up if they had the chance to attend the programming and get the education.”