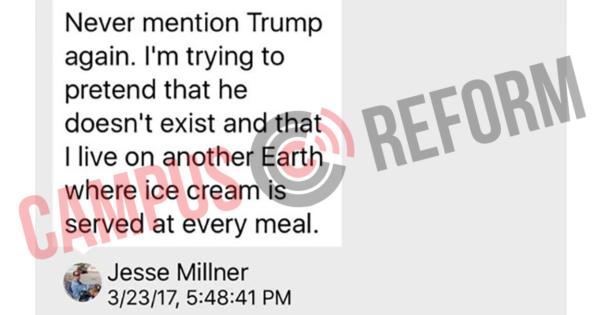 Trump-bashing from college professors has become so casual and widespread that students are proudly sharing anti-Trump emails and messages from their educators on social media.

Campus Reform found three such tweets from students who were apparently bursting with pride that their professors had managed to slip their anti-Trump bias into student-teacher communications.

“When your professor calls Trump a dictatorial megalomanic [sic] lol.”

One Twitter user named “alex” said she submitted a poem for class that was “based on Trump” and was “loling” at her professor’s response.

Jesse Millner, an English professor at Florida Gulf Coast University, told “alex,” who claims to be a sophomore at the school, that she should avoid writing about Trump in the future because Millner is “trying to pretend that he doesn’t exist.”

“Never mention Trump again,” Millner wrote in response to “alex’s” assignment. “I’m trying to pretend that he doesn’t exist and that I live on another Earth where ice cream is served at every meal.” 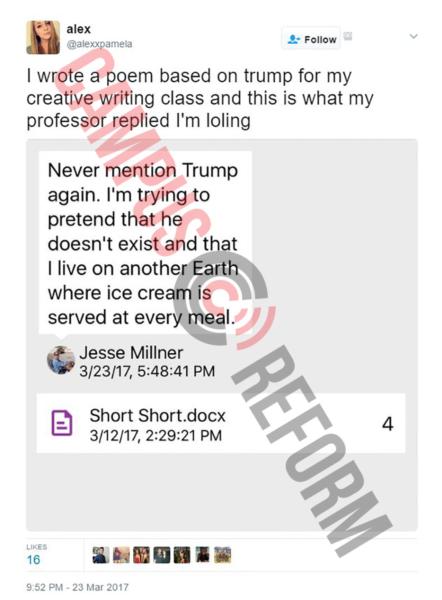 A professor at the University of North Texas went beyond one-on-one communications to make known his distaste for Trump, taking a dig at the president in the description of a class assignment.

Sanjuana Banda, who attends UNT, shared a photo on Twitter of an assignment from one of her professors. The assignment appears to be a peer review of a previous group project, wherein students have to rate their group mates, so the unnamed professor warned students that they shouldn’t act like Trump in their group projects because the other members may rate them poorly.

“If you act like Trump (a dictatorial megalomaniac) or are completely MIA,” the professor cautioned, “your grade will reflect their assessment of your performance.” 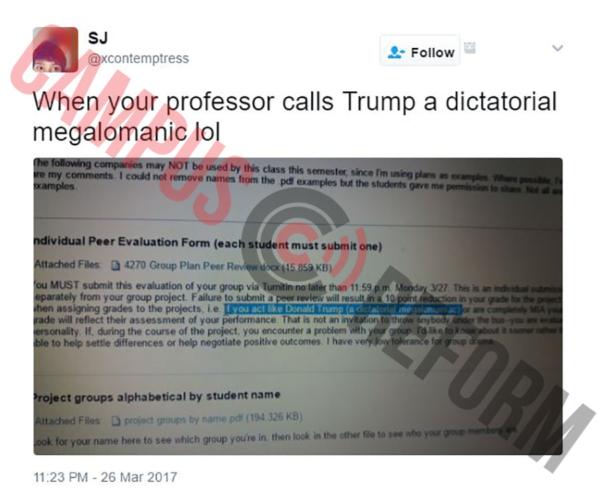 Another student tweeted a screenshot of an anti-Trump joke that her history professor apparently sent to the entire student body, boasting that her professor “drags Trump in any way he can.”

Robert Panetti, a personal trainer at Bay Path University, emailed students a “fruit riddle,” ostensibly to invite them to pick up free oranges from the fitness center.

“Whats [sic] round, orange, free and full of Vitamin C? Come to the fitness center and see!” Panetti innocently wrote.

The professor, whose name is redacted in the post, responded to the email chain asking if the “fruit riddle” was really about Trump.

“President Trump?” the professor jeered. “Not sure if it’s Vitamin C he’s full of, though.” 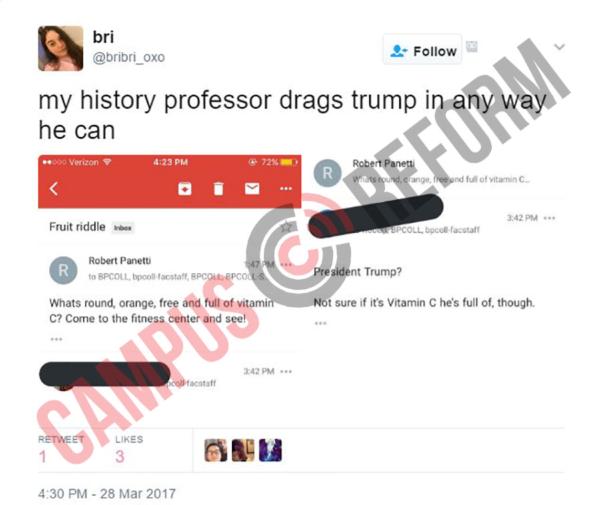 Campus Reform reached out to each of the schools mentioned, but none had responded by press time.