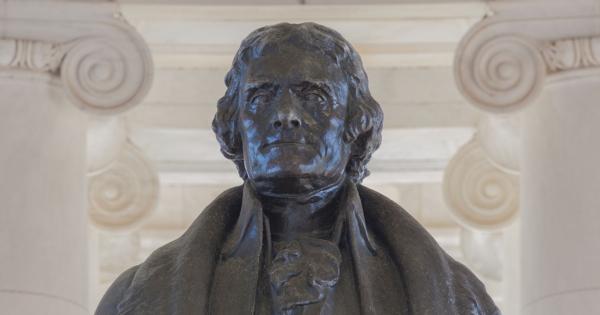 Columbia University students recently adorned a Thomas Jefferson statue with a Ku Klux Klan hood to protest “a man who is the epitome of white supremacy.”

In a “Statement to the University” published Sunday, members of the student group Mobilized African Diaspora (MAD) condemn Columbia for honoring Jefferson’s legacy, calling him “the epitome of white supremacy” and arguing that his statue contributes to the ongoing marginalization of black students.

“Jefferson’s statue makes it clear that Black students are merely tokens of the university.”

“Thomas Jefferson never stepped foot on this campus; however, 274 years postmortem, Columbia University continues to celebrate the legacy of a man who is the epitome of white supremacy,” the group complains, noting that 5.4 percent of Columbia students self-identify as black or Native American.

Columbia has just one display of Thomas Jefferson on its campus—a bronze sculpture outside of the journalism school—but other notable figures, such as Alexander Hamilton and Auguste Rodin’s The Thinker, are also memorialized elsewhere on the grounds.

“Columbia University adheres to Jefferson’s brand of hypocrisy because it keeps a physical manifestation of the antithesis to Black women’s lives on the same campus that uses illusions of diversity to recruit students,” the statement contends, adding that “Jefferson’s statue makes it clear that Black students are merely tokens of the university.”

MAD goes on to accuse the administration of failing to uphold “its promise to protect Black and Brown bodies,” arguing that while Jefferson “may represent freedom for the white elites of his time,” the statue “[embodies] the same threat that the KKK poses” for non-white students.

The group even goes so far as to declare that “venerating” Jefferson “validates rape, sexual violence, and racism,” which they say is at odds with the university’s pledge to provide a “safe and inclusive environment.”

MAD concludes by vowing that it “will continue to unearth and illuminate Columbia’s past, present, and future memorialization, facilitation, and manifestation of anti-Blackness,” though its members declined to elaborate on their plans in response to requests for comment from Campus Reform.

The group, which has no public members, describes itself as a coalition of black students at Columbia, and made its debut last year by issuing an ultimatum demanding that Columbia hire more faculty of color, increase funding for academic departments that teach diversity classes, and require that all undergraduate students take two diversity classes.

Columbia University did not respond to multiple inquiries from Campus Reform..