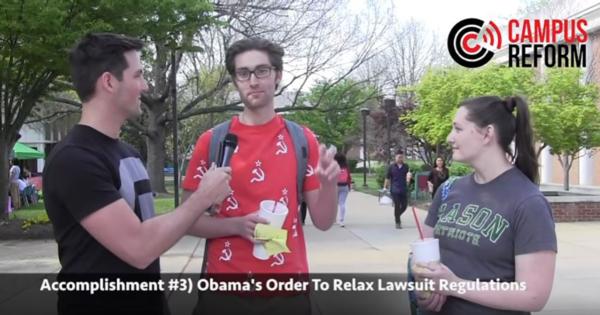 Saturday will mark Donald Trump’s 100th day in office, an important milestone for U.S. presidents ever since the flurry of panicked flailings with which Franklin Roosevelt began his administration.

While supporters of President Trump point to his slew of executive orders and the confirmation of Supreme Court Justice Neil Gorsuch as markers of his success, detractors claim Mr. Trump has accomplished very little since taking office.

Throughout the year, Campus Reform has shown how liberal professors and students across America have been quick to oppose the President’s actions—often without understanding important details about them.

Hoping to tease out whether such reflexive opposition to Trump is based on policy disagreements or simply distaste for Trump himself, Campus Reform headed to George Mason University to ask students their opinions about the first 100 days.

Except, the “Trump accomplishments” we referenced were actually all things President Obama had done during his first 100 days in office.

Would they agree with the actions because they were actually liberal policies enacted by President Obama, or would they shoot them down because of their perceived association with Donald Trump?.

We quickly discovered that the students we spoke with were quick to voice their displeasure with the “accomplishments” we told them about, no matter how liberal they really were.

When disguised as something Donald Trump did, for instance, what did students think of President Obama’s “Apology Tour?”

Why, that’s “dangerous” and “overstepping his bounds,” they cried.

What about Obama’s stimulus package?

When credited to Trump, they found the idea reminiscent of Nazi Germany.

Watch the full video to see how these students reacted when we revealed that the policies they found so distasteful were actually implemented by President Obama.