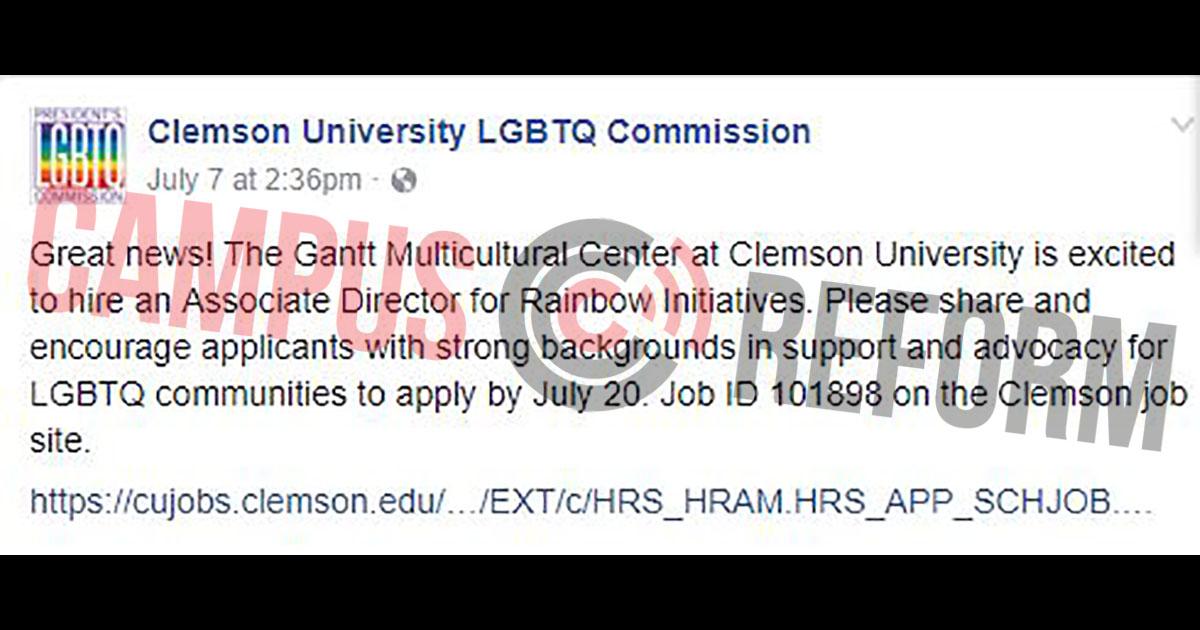 Clemson University is revising a job posting for an “Associate Director of Rainbow Initiatives” that appeared to imply that the school is establishing an LGBTQ resource center.

“Great news! The Gantt Multicultural Center at Clemson University is excited to hire an Associate Director for Rainbow Initiatives,” the Clemson University President’s LGBTQ Commission announced on July 7, only to delete the job posting following inquiries from Campus Reform.

"No special space that would serve any particular group of students has been discussed or approved."

Approximately 40 percent of the job was to deal with “Education, Social, and Supportive Programming,” such as overseeing events like “National Coming Out Week,” “Trans* Awareness Week,” “Rainbow Thanksgiving,” “Pride Week,” “a large-scale annual Drag Show,” and a “Lavender Graduation.”

The associate director would also oversee “Ally Training,” a program that aims to increase awareness of LGBTQ issues, specifically addressing topics such as sexual orientation, gender identity, and gender expression.

The associate director was also slated to serve as staff advisor for the Sexuality and Gender Alliance (SAGA)—a group of “open-minded students, faculty, and friends that have come together to share their support” for the LGBT community—as part of a larger goal of facilitating “the growth and establishment of additional LGBTQ campus-based organizations.”

In an April open letter, the student SAGA president complained that the LGBTQ+ community was treated as “simply another ‘student group,’” and demanded that Clemson create an LGBTQ safe space. Clemson’s student government later responded by passing a resolution calling for a “permanent space” for the LGBTQ+ community on campus.

The job posting appeared to allude to this in a section detailing “Space Management” responsibilities, which stated that the associate director would be responsible for providing “a comfortable, safe, accessible resource center for anyone interested in a place to talk, listen, or find support and materials around LGBTQ issues.”

Campus Reform previously reached out to Clemson Director of Media Relations Robin Denny for comment regarding the space, and was told that “no location has been identified for use as a community space for our LGBTQIA+ students at this time.”

Campus Reform reached out to Vice-President of University Relations Mark Land to determine if the university’s position had changed.

“Clemson continues to be a welcoming place that strives to serve the needs of all its students, however, no special space that would serve any particular group of students has been discussed or approved by senior administration,” Land responded.

When asked to clarify the Associate Director for Rainbow Initiatives’ “Space Management” role, he indicated that the section had been included erroneously.

“I can’t speak to the exact process for producing the job description that you saw, but I have been told that the description is being re-evaluated,” he explained. “There is no specific ‘space management’ component to the role. The individual in this position will serve as a resource for our GLBTQ community but we aren’t considering a specific space for this—or any other single group—at this time.”

As of press time, the Associate Director for Rainbow Initiatives job listing was inaccessible on the Clemson job website.