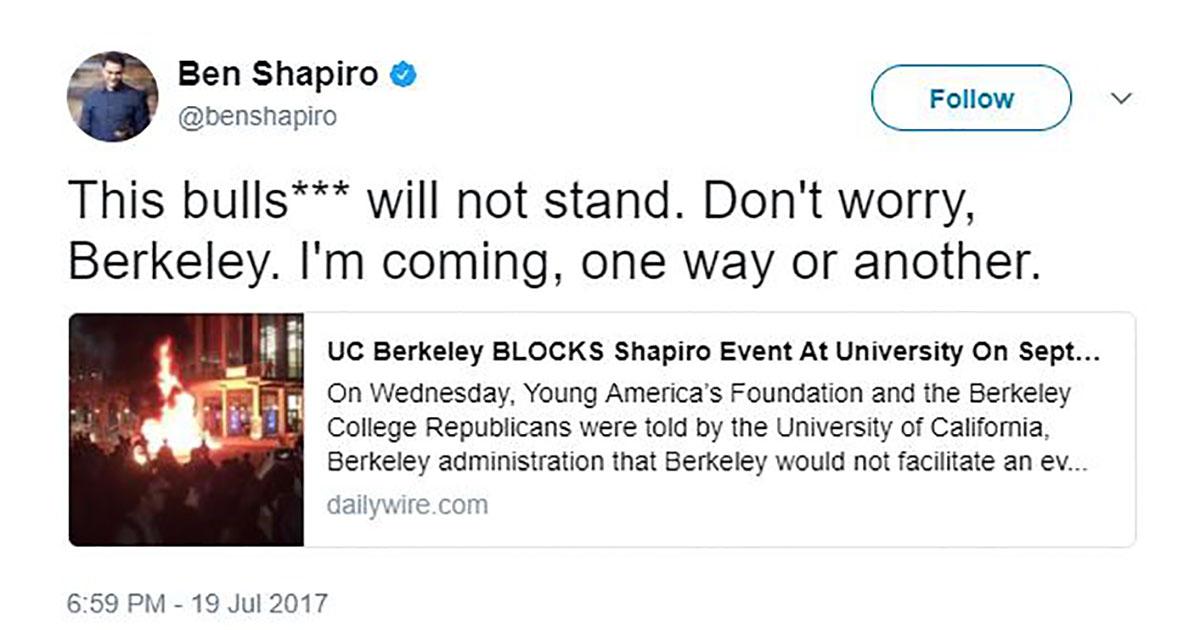 The University of California, Berkeley has announced that it will not accommodate Ben Shapiro for a speaking arrangement this fall.

The news comes just months after the elite institution, the so-called birthplace of the Free Speech Movement, prevented fellow pundit Ann Coulter from speaking on campus.

"Using ridiculous pretexts to keep conservatives from speaking is unsurprising but disappointing."

According to a statement provided to the Young America’s Foundation (YAF), the organization that planned to host Shapiro in conjunction with the College Republicans, the school claimed that it was “unable to identify an available campus venue” for the September 14 event.

“Ben Shapiro is welcome on our campus and we are committed to supporting his, and your, rights to free speech,” the statement went on to add, though Shapiro has since called the move “bullshit.”

“This bullshit will not stand. Don’t worry, Berkeley. I’m coming one way or another,” Shapiro tweeted Wednesday night, to which Coulter responded in “congratulations” for joining the club.

In a later tweet, Shapiro questioned if California Governor Jerry Brown planned to do anything about the public university “routinely violating the First Amendment.”

“Using ridiculous pretexts to keep conservatives from speaking is unsurprising but disappointing,” he added in a statement to YAF. “We’ll find a way to get this event done, and UC Berkeley has a moral and legal obligation to ensure we do so.”