Prof: ‘ALL white people are racist,’ ‘ALL men are sexist’ 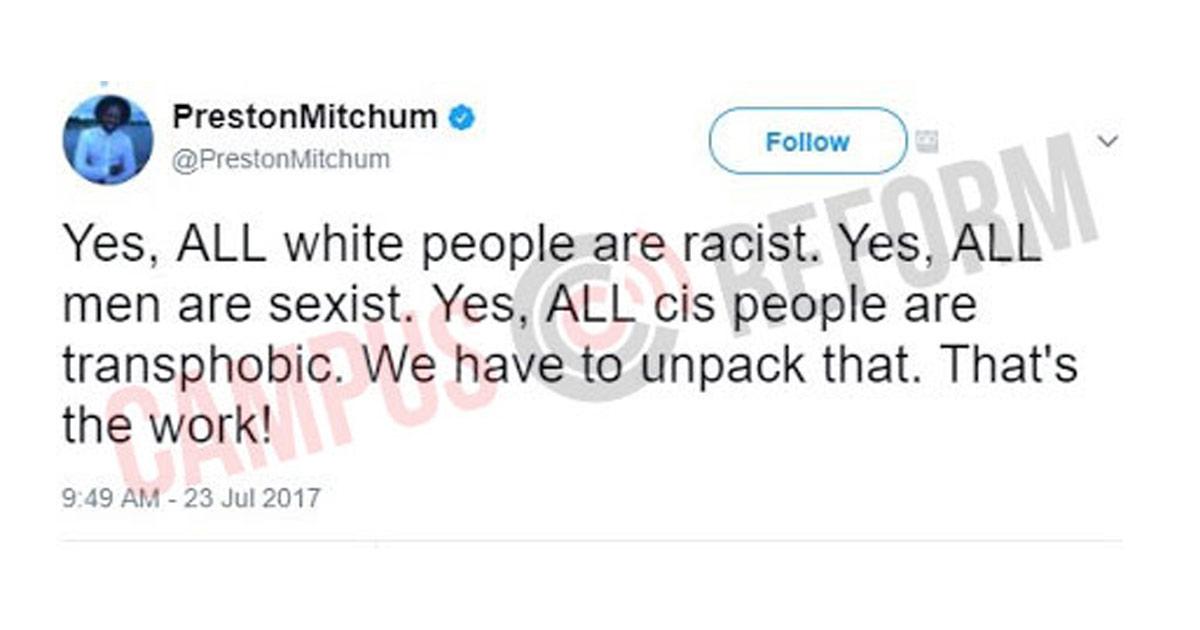 A Georgetown University law professor recently claimed that “ALL white people are racist” and “ALL men are sexist.”

“Yes, ALL white people are racist. Yes, ALL men are sexist. Yes, ALL cis people are transphobic,” Adjunct Professor Preston Mitchum stated in a recent tweet, saying “we have to unpack that. That’s the work.”

Mitchum frequently vocalizes his views on Twitter, arguing in one recent tweet that “everyone has bias, stereotypes, and judgments no matter who you are,” but “what makes this racist, transphobic, sexist is when you add power.”

“If you’re apart [sic] of any dominant group when it comes to race, gender, sexuality, etc., you contribute to the oppression of groups period,” he added, expressing in another tweet his deep hatred for police officers.

Georgetown Law School recently hired Mitchum, causing him to boast on Twitter that he “doesn’t just annoy people online,” but now gets “to be an adjunct professor, annoying people in real life.”

Mitchum, expanding on his statements to Campus Reform, reiterated that “any person [who is] a part of any dominant group when it comes to race, gender, sexuality, etc. contributes to the oppression of other groups,” and noting that “it doesn’t matter if they choose to do so consciously/subconsciously, knowingly/unknowingly, or with bad/good intentions.”

“What makes something racist, sexist, transphobic, homophobic, etc. is when ‘power’ and the ability to effectuate said power is added,” he explained, saying “we must stop using this textbook definition of ‘racism’ because it doesn't take into account real world experiences of those who are on the receiving end of racism: people of color.”

Mitchum went on to note that he was “a little troubled, but not surprised, about the conservative outrage” provoked by his initial tweet, since most commenters took issue with his remarks about white racism.

“Most of the commentators didn't push back on the idea of men being sexist and cis people being transphobic as untrue; only that all white people are not racist. And that's likely because many of them saw themselves in my tweet and went on the defense immediately,” he said, noting that he himself has “been fed sexist and transphobic thoughts from society,” while “white people writ large have been fed racist thoughts.”

“Because of that, there's unlearning to do. Everyone must do this—which is why I said, ‘that's the work,’” he concluded. “The problem is that people in dominant groups are so used to being defensive, that they aren't even taking a step back to even consider that maybe, just maybe the marginalized community is right.”