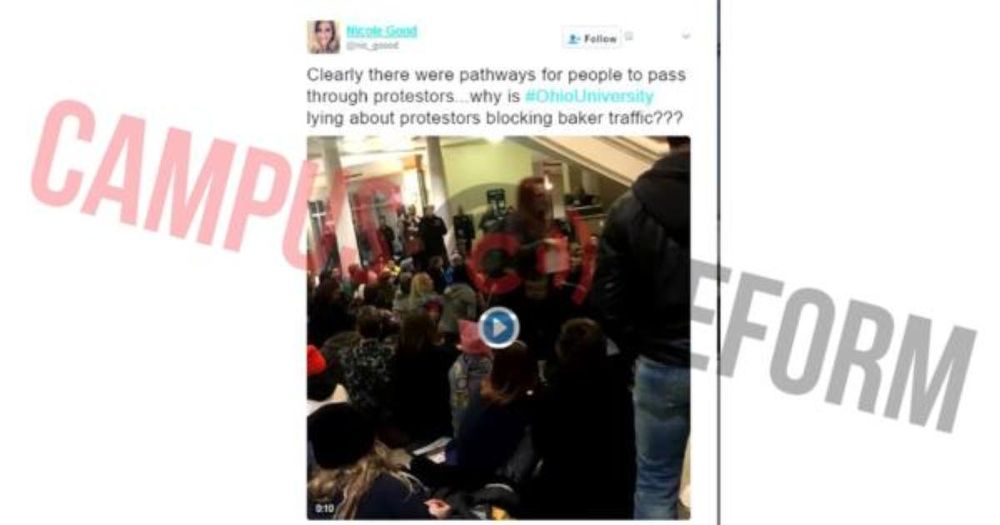 According to The Post Athens, OU announced the new “Freedom of Expression” policy Friday, which included new changes to the use of indoor and outdoor spaces on campus.

“The purpose of this policy is to promote the free exchange of ideas while ensuring the safe and efficient operation of university facilities and outdoor spaces,” the new policy reads.

[RELATED: Salem students hold sit-in until they get 'some action']

In addition to prohibiting “demonstrations, rallies, public speech-making, picketing, sit-ins, marches, protests, and similar assemblies” inside buildings, it ensures students the right  to “reserve and use available outdoor spaces for any legal purpose, including to engage in constitutionally protected speech.”

The policy also insists that the school does not seek to limit “the rights of individuals authorized to attend an event in a university building to engage in constitutionally protected speech,” provided that “they do so in a manner that does not materially disrupt the event or prevent others from expressing their views.”

The new policy comes in the wake of a contentious sit-in that took place in February, during which students demanded that the university become a sanctuary campus. A spokesperson said at the time, however, that “protesters were informed repeatedly that they were impacting operations, egress, and creating a safety issue.”

"They were given ample opportunity and time to relocate, and at 7:58 p.m. OUPD began arresting anyone who refused to leave. Approximately 70 protesters were arrested and charged with criminal trespass,” the spokesperson explained, though the charges were later dropped after Athens County Municipal Court ruled that the occupied building was considered a public forum.

Hence, University Spokeswoman Carly Leatherwood told the publication that the new policy is designed to provide “consistency and predictability” when it comes to dealing with controversial protests.

“In the past, demonstrations and sit-ins inside buildings were considered to be disruptive to university operations and our practice was typically to disperse such gatherings,” she said. “The new Freedom of Expression policy was adopted to lend consistency and predictability to the university’s handling of these events.”

Azhar Majeed, the vice president of policy reform at the Foundation for Individual Rights in Education (FIRE), told Campus Reform that while the indoor restrictions are “not ideal,” the organization considers the new policy “reasonable.”

“In terms of the policy’s ban on demonstrations and similar activity in indoor locations, it's not ideal from FIRE’s perspective,” Majeed explained, though he also added that he understands why a university would wish to have such regulations in place.

“However, we give some leeway to universities and we understand why...they would have those kind of regulations in place, simply to prevent disruption to the educational setting, or to prevent interference with university functions,” he said. “So to that extent we understand where the university is coming from and we see this as a reasonable regulation.”

Majeed concluded by stressing that the “most important” aspect of the policy is the decision of the university to “[open up] much of its campus in terms of the outdoor locations to free speech protected by the First Amendment.”