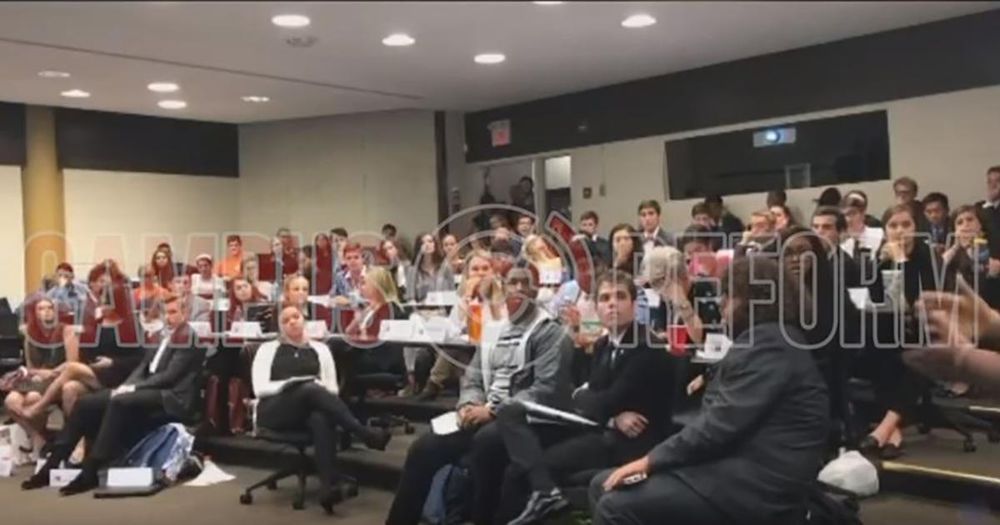 A Clemson University student senator is being called a racist for proposing a motion to impeach a black student government official accused of sexual harassment.

Hoffman is seeking an impeachment trial for Vice President Jaren Stewart following revelations that Stewart was fired from his job as a Resident Assistant after he was accused of “theft, trespassing, strong-arming, intimidation, and sexual harassment,” according to an incident report released by FitsNews.

Yet Hoffman’s fellow senators, members of the audience, and media outlets alike accused him of having racist motivations, blaming the call for impeachment on Stewart’s recent decision to protest the Pledge of Allegiance during an official meeting.

“I cannot stress enough how this situation has nothing to do with the flag protest or contain all racial motivation at all. Such a narrative is without evidence and completely untrue,” Hoffman countered, noting that Stewart was vice president of CUSG at the time of his termination from his RA position.

Nevertheless, some students explicitly accused Hoffman of having racist motivations, with student Khayla Williams stating,  “you said this is not about race, sir. I highly doubt that.”

“The fact is Jaren is our representation on this campus. It goes back to he’s black,” she elaborated. “He is black and he is in charge, man. That’s the reality.”

While the Senate ultimately voted 40-18 to hold an impeachment trial for Stewart, setting the date for November 6, many students were not happy with the outcome and so began circulating a petition to be delivered to the “Executive Leadership Team at Clemson University.”

The petition demands that the Clemson administration “intervenes into the proceedings of Clemson’s Undergraduate Student Senate meeting on October 23, 2017. Specifically, the decision to proceed with the Impeachment Trial of Jaren Stewart.”

“These articles were suggested based off the preconception and bias included parties possess. We feel as though there is no way that Vice President Stewart would receive a fair trial,” the petition continues, calling on the leadership team “to step in and nullify this decision to go to trial,” and “blockade any attempt to re-enter the Articles of Impeachment.”

Campus Reform reached out to CUSG Senator Hoffman, who called the allegations of racism nothing more than a distraction.

“This is not a race/protest issue,” he stated. “That pivots away from the serious behavior concerns involving sexual harassment and intimidation, as well as unlawful entry/trespassing.”