Some individuals resorted to threats and vandalism when the University of Washington College Republicans hosted an event discussing the Deferred Action for Childhood Arrivals (DACA) program.

Members of UWCR hosted a “DACA booth” on January 12, sitting behind a table on campus with a sign reading, “I Oppose DACA, Change My Mind,” along with a banner advertising the College Republicans.

"Unfortunately, our event was violently interrupted by two leftist agitators. One of the two distracted us while the other ran up and slashed our banner with a boxcutter."

Chevy Swanson, the President of UWCR, told Campus Reform that the event was designed to generate a discussion and advertise the club.

“The point is to advertise the club by saying, ‘hey, we are the College Republicans and this is something we believe, come ask us why,’ but it’s also there so that we can actually talk with students who don't know the issues well, or don't know both sides of the issues well,” Swanson told Campus Reform. “It’s like a very lighthearted public debate meant to get our name and our ideas out there in a respectable way that doesn't get in anyone's face.”

For some, however, the event represented far more than a thoughtful discussion.

“The UW College Republicans are on their fascist bulls**t again,” UW student Antonio Alvarado, who describes himself as a 21 year-old disabled Mexican communist, tweeted, alongside pictures of the DACA booth.

“Banner in front of the HUB reads: I OPPOSE DACA CHANGE MY MIND If any white, documented, abled, or other privileged folks are available rn, shut these motherf***ers down!!!” Alvarado’s tweet concludes.

Alvarado later responded to his first tweet, writing, “Oh they've been gone for a minute by now but next time they try some s**t...”

“Someone came up and cut one of our signs with a boxcutter according to one of our members who was there,” Swanson confirmed to Campus Reform. “We also noticed that one of the officers of the UW MEChA club posted on Twitter a call for someone to come ‘shut us down’, which was obviously done by whoever destroyed our decoration.”

“Unfortunately, our event was violently interrupted by two leftist agitators,” confirmed Armen Tooloee, a UWCR member helping to run the event at the time. “One of the two distracted us while the other ran up and slashed our banner with a boxcutter.”

Movimiento Estudiantil Chicanx de Aztlán at the University of Washington (MEChA de UW), describes itself on its Facebook page as “a student organization that promotes higher education, cultura, & historia,” and the group’s website lists Alvarado as one of its officers. 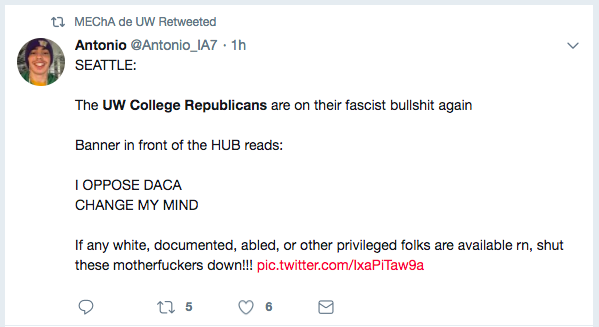 Swanson proceeded to report the vandalism and threats to the UW administration, and received a response from Denzil Suite, UW Vice President for Student Life.

“Hello Mr. Swanson, Thank you for bringing this to my attention. I am glad that no one was physically injured,” Suite wrote in an email, adding, “The call to action you mention, while provocative, would constitute protected speech, in the same manner as your events.

“That said, I do find the willful destruction of your property to be unacceptable,” Suite continued, encouraging Swanson to file a police report and clarifying that “If the perpetrator of this act is found to be a student, that individual will be subject to action under the Code of Student Conduct.”

However, Swanson asserted that the school didn’t respond forcefully enough.

“I think this response is very weak,” Swanson told Campus Reform, complaining that “the school acted like it was some sort of joke.”

Campus Reform reached out to Alvarado and MEChA de UW, but did not receive a response in time for publication.