While most Clemson University students were home for Christmas break, vandals lashed out at the school’s conservative student newspaper, strewing torn-up copies on the ground nearby.

“Clemson University students, employees, and the community, over winter break two of The Tiger Town Observer's distribution bins had their editions vandalized,” a TTO Facebook status posted on January 10 reads.

"It’s probably due to the fact that the cover features LGTBQ , Marxist, and Islamic imagery and that edition tackles controversial topics some might consider offensive."

Photos accompanying the status show the newspaper’s magazines bent, strewn across the ground, and, in one case, ripped in half and left atop the magazine distribution bin. Additionally, the bins are entirely devoid of magazines, prompting speculation of theft.

“The TTO would like to remind everyone that vandalism is both a criminal offense and a violation of the student code of conduct and that future incidents will be reported to the Clemson University Police Department,” the status concludes. 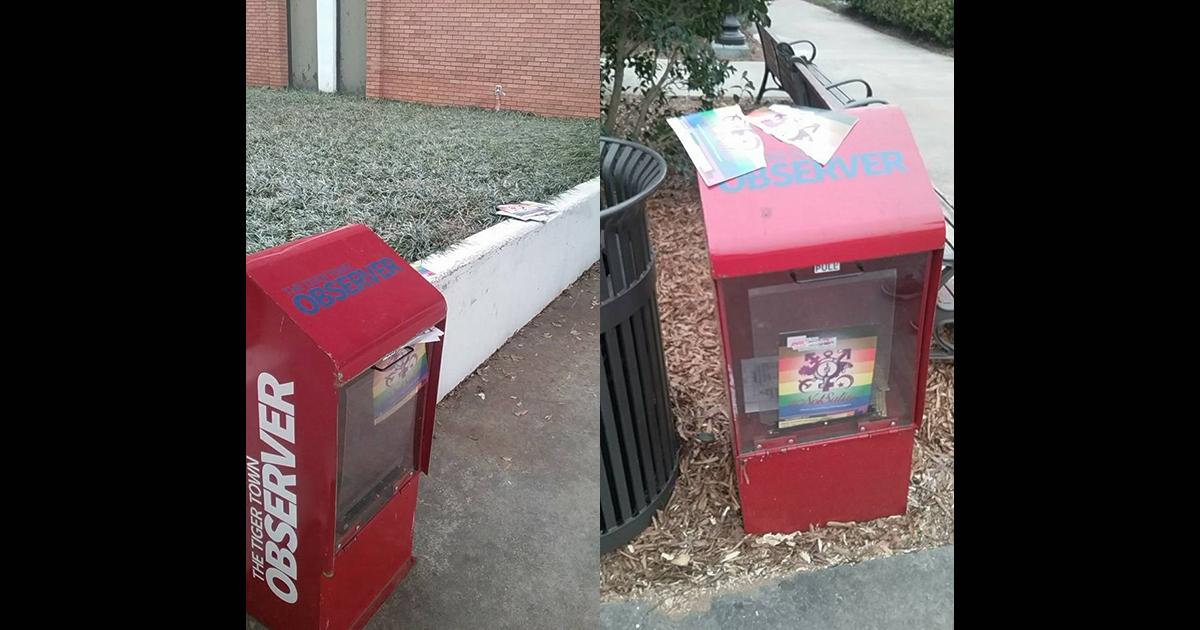 TTO’s latest issue bears the title “#NotSatire,” with the caption, “Clemson’s only non-binary conforming magazine.” The cover of the magazine sports an “inclusive pride flag” with black and brown stripes, as well as transgender symbols and the communist hammer and sickle.

The issue is entirely satirical, and includes articles such as “Community Dialogues Changes Student’s Life,” a piece that makes fun of a mandatory Clemson freshman class, CU1000, during which students were forced to participate in a “safe space” session during the course’s “Community Dialogues” component in September 2017.

"When I returned from Winter Break I checked each of The Tiger Town Observer's distribution bins on campus. Two of them had their editions vandalized,” Cullen TTO Editor-in-Chief Alexander told Campus Reform.

“I've had to replace three other bins which have had their editions either thrown away or taken entirely,” he added, saying, “I don't think whoever is doing this realizes that destroying that many magazines is expensive and we've lost as much as $200 dollars in magazines.”

Speculating that “it’s probably due to the fact that the cover features LGTBQ , Marxist, and Islamic imagery and that edition tackles controversial topics some might consider offensive,” Cullen said he has reported the destruction to the Clemson University Police Department.

“I'm not sure what led whoever is doing this to destroy the magazines rather than to stop interacting with them, but destroying the property of a campus newspaper is an entirely wrong way to go about challenging our claims,” Cullen argued.

“Sadly this isn't the first time we've had this happen. Editions of ours have been destroyed in the past,” he added. “I'm hopeful that the University Police Department is able to help."