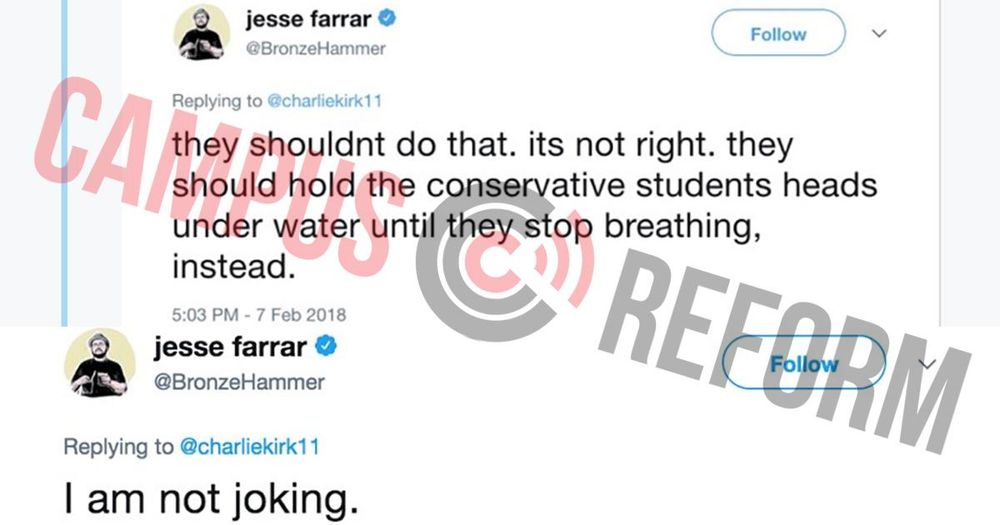 A liberal journalist and podcaster declared in a Twitter exchange Wednesday night that professors should drown conservative students instead of just grading them harshly.

Jesse Farrar, a former contributor for Deadspin and Vice, made the comment in response to a tweet from conservative activist Charlie Kirk calling attention to the anti-conservative bias in college classrooms.

“I get countless of messages from students who say professors are lowering their grades & penalizing them for being conservative,” Kirk remarked in his original tweet.

Kirk later criticized Farrar, suggesting that there is a double standard between what jokes conservatives and liberals can make on social media.

“Interesting, @BronzeHammer seems to call for the death of conservative students via water boarding suffocation,” Kirk tweeted. “Im [sic] sure he is joking, but imagine if conservatives made a joke like that against liberals?”

“I am not joking,” Farrar responded.

The comedy writer also retweeted a statement from a deputy editor of Deadspin, Barry Petchesky, who came to his defense when responding an email related to Farrar’s tweet.

“While Farrar no longer writes regularly for Deadspin, we as an organization do support his stance of trolling white supremacist-supported and associated organizations like Charlie Kirk’s Turning Point USA,” Petchesky said in the statement.

“And while I would not personally advocate the method mentioned in Farrar’s obvious joke Tweet you seem to be using to try to snitch on him to his employers, I can’t argue that it wouldn’t make the world a better place,” he added.

Farrar did not immediately respond to Campus Reform’s request for comment.