Liberal activists at the Indiana University of Pennsylvania are targeting conservative students as part of an effort to derail a talk by Turning Point USA founder Charlie Kirk in April.

According to Brandon Uhalik, the president of the TPUSA chapter on campus, several activists have been organizing to “raise hell” ahead of the event and have posted flyers labeling the organization as a “white-nationalist hate [group].”

"Local residents began posting my information and trying to organize ways to chase us off of campus."

The posters, which Uhalik claims have appeared all over campus, also feature a picture of Kirk and the TPUSA logo being disposed of as “trash” along with a caption that reads “Keep IUP safe and clean!” 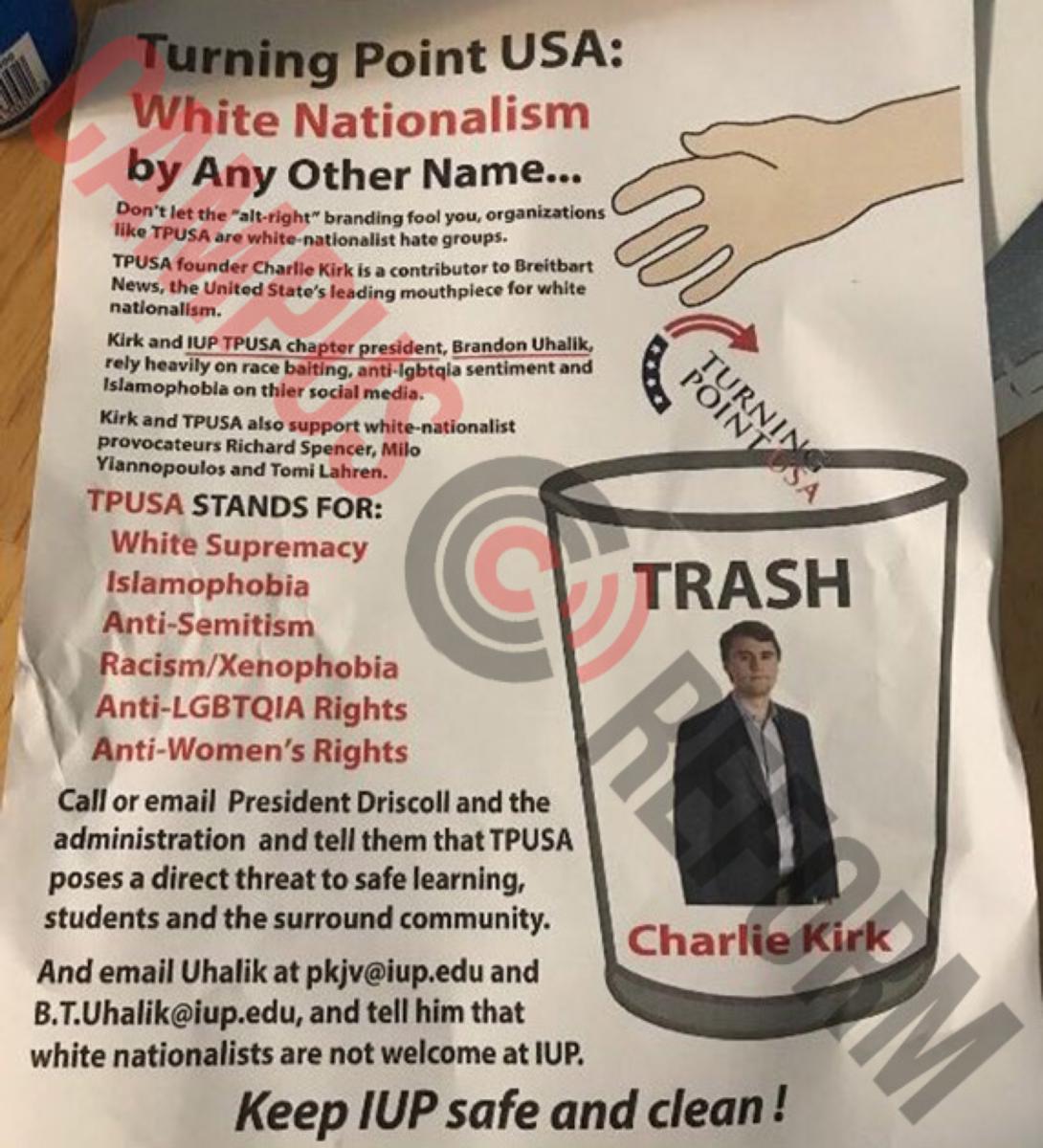 Other images and screenshots obtained by Campus Reform show activists discussing the upcoming Kirk lecture on social media, and planning to “sell out his event” by buying tickets with fake email information.

“Hey yinz and y’all - Charlie Kirk is slated to come to IUP. We’d love to git his goat by going through all of his tickets,” one user wrote in a liberal activist Facebook group. “If yinz have any fake emails - by all means —- sell out his event.

“Lets get all these tix off his hands - and then stay tuned for an organizing strategy,” the post continues. “Turning Point is at IUP and we’re all trying our best to put the run on them.” 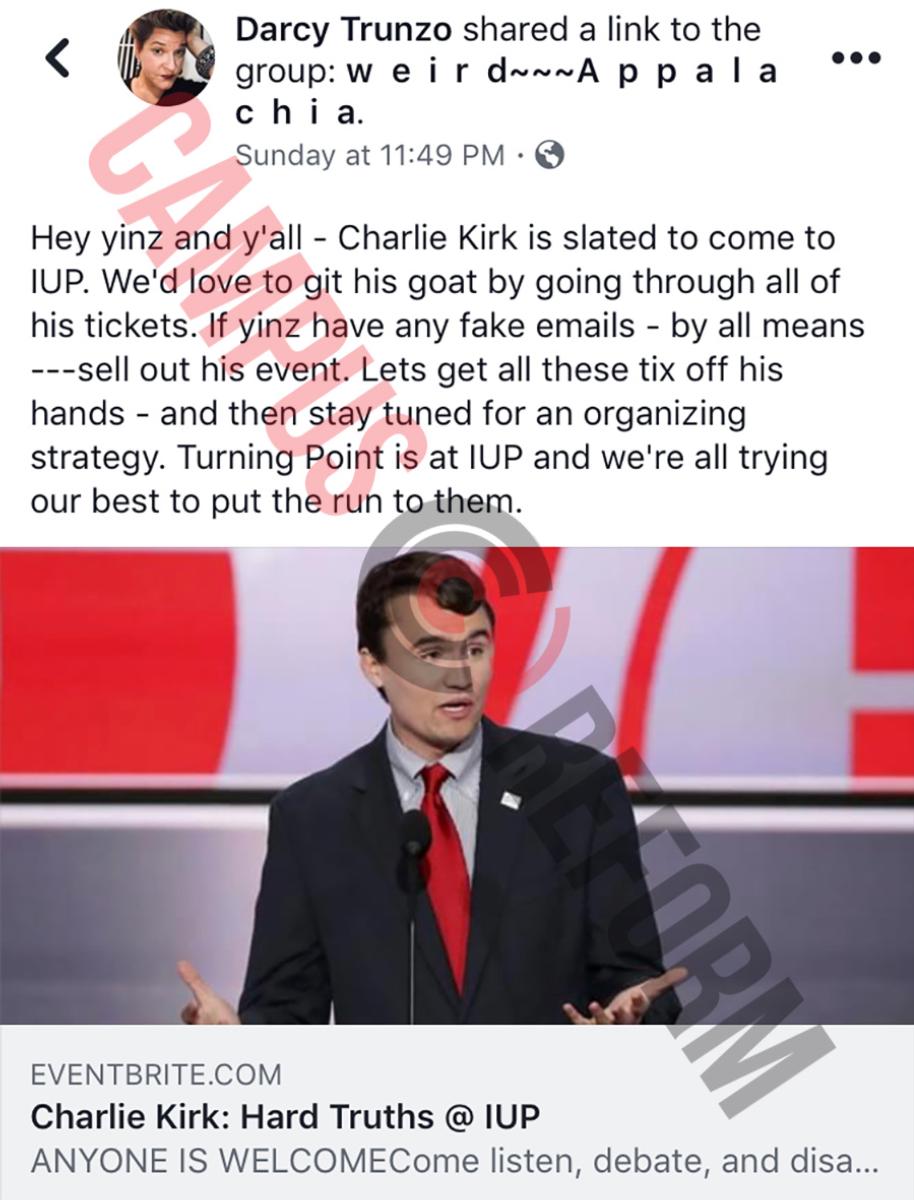 While the post calling for a ticket buyout no longer appears on the group’s public page, another post calling Kirk a “nazi” is still accessible to all Facebook users.

“This nazi is coming to Indiana University of Pennsylvania,” the post reads, while linking to an article about Charlie Kirk. “Let the nazi organizer Brandon Uhalik know yinz don't take kindly to fascists.” 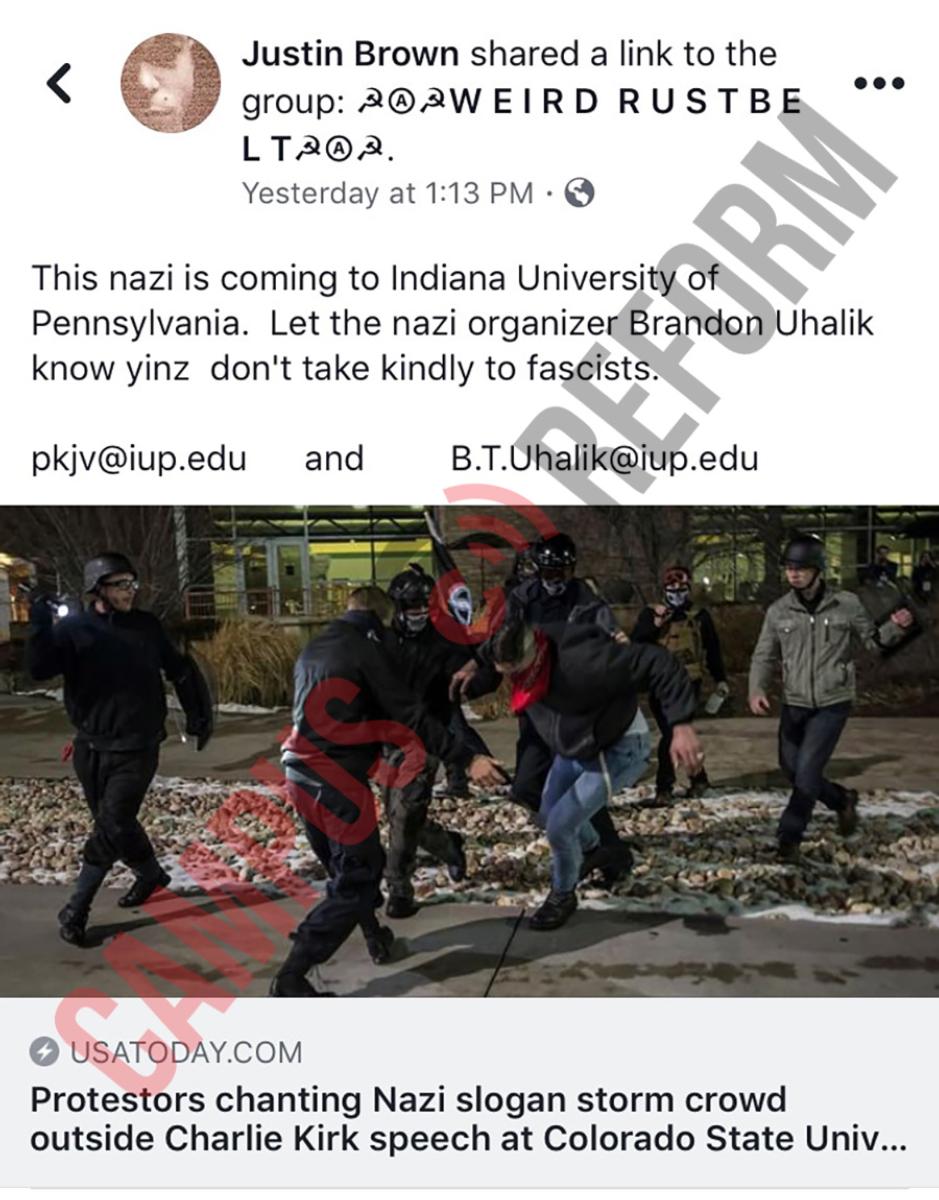 In an email to Campus Reform, Uhalik said that IUP Turning Point members were even targeted and harassed by local community members who are now plotting ways “to chase us off of campus.”

“A few members of our chapter, including myself, went to speak at the local Indiana borough council meeting because their Vice President started attacking our Turning Point chapter and the national organization,” Uhalik said. “Local residents began posting my information and trying to organize ways to chase us off of campus.”

In an email to Campus Reform, a university official said that the school supports “civil exchange of ideas and perspectives,” while also striving to protect “the safety and security of our campus.”

“As a university of different peoples and perspectives, IUP aspires to promote the growth of all people in their academic, professional, social, and personal lives,” the spokesperson said. “Students, faculty, and staff join together to create a community where people exchange ideas, listen to one another with consideration and respect, and are committed to fostering civility through university structures, policies, and procedures.”