San Diego State University is offering a one-credit course next month dedicated exclusively to the topic of removing Donald Trump from office.

The only required reading for the course is a book called "The Case for Impeachment," though the course description indicates that the class will also explore the possibility of removal under the 25th Amendment. 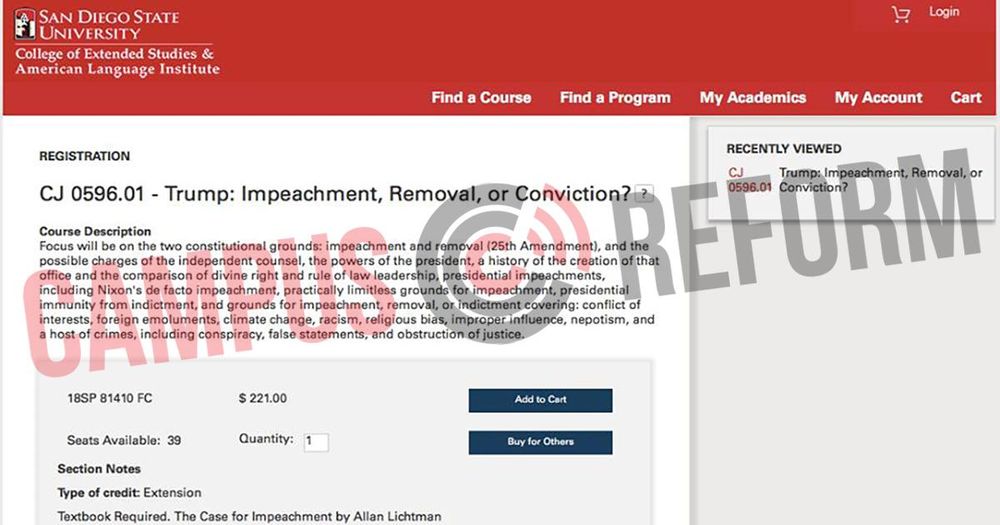 San Diego State University is offering a course dedicated exclusively to the topic of removing Donald Trump from office.

The one-unit course--“Trump: Impeachment, Removal, or Conviction?”--will be offered in March and is set to be taught by Professor John Joseph Cleary. The required text for the course is Allan Lichtman's The Case for Impeachment, a book published in response to Donald Trump’s election that advocates for the President’s removal from office.

“Focus will be on the two constitutional grounds: impeachment and removal (25th Amendment), and the possible charges of the independent counsel, the powers of the president,” and “a history of the creation of [the presidency] and the comparison of divine right and rule of law leadership.”

The curriculum will also address “grounds for impeachment, removal, or indictment,” such as “conflict of interests, foreign emoluments, climate change, racism, religious bias, improper influence, nepotism, and a host of crimes, including conspiracy, false statements, and obstruction of justice.”

The course will be offered through SDSU’s Criminal Justice program which is a part of the school’s College of Professional Studies and Fine Arts.

The course was one of four one-credit courses featured in an email sent to students Monday, which advertised them as a way to get the last credit necessary for a degree for just $221. The courses do, however, require students to attend two marathon 15-hour class sessions spaced roughly one week apart.

Prof. Cleary did not immediately respond to Campus Reform's request for comment. This article will be updated if and when a reply is received.