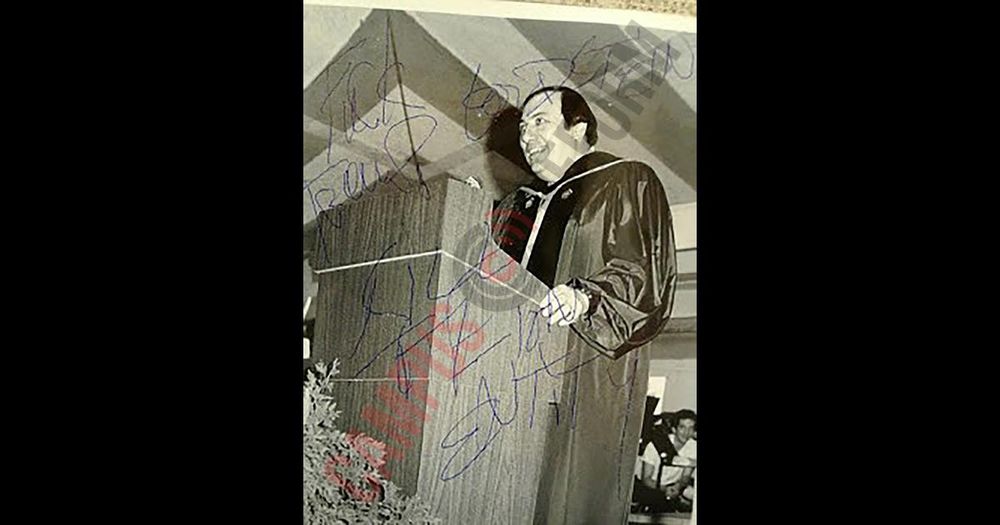 An administrator at CUNY Kingsborough Community College recently arrived at his office to find that someone had scrawled anti-Semitic graffiti on a photograph of his deceased father.

“F**k Trump Goldstein/Kill Zionist Entity,” read the barely-decipherable message written across a photograph near Director of Outreach and Community Marking Mike Goldstein’s door. The picture was of Goldstein’s late father, Leon M Goldstein, who was the president of Kingsborough Community College from 1970 to 1999.

“The photo was hung on a Bulletin Board outside my office door along with another 3-4 photos of faculty and staff from the college in the 1970's,” Goldstein told Campus Reform, noting that “only the photo of my Dad” was touched by the vandal(s).

“I filled out an internal college report. They do not consider it a Hate Crime at Kingsborough—just destruction of private property,” he recounted, though he made clear that he doesn’t blame the school’s Public Safety officers.

"They are great,” he said. “They cannot have eyes and ears on every staff member at the college all the time; I understand."

Goldstein explained there are two cameras on his floor, but that neither point towards the area in question.

“I asked for a camera to now be pointed towards my area and they said they could not do that,” he told Campus Reform. “I asked for an alarm for my office under my desk—most offices at the college have them—they said that there is no connectivity for the alarm in my building to set one up.”

According to Goldstein, the college offered to move his office, but he decided to keep his current one because the university was not sure where the new location would be.

Goldstein suspects that the vandalism had to do with his political affiliations, pointing out that not only is he a proud Trump supporter, but that his family also has connections to the Trump family, showing Campus Reform a photo of his father with President Trump's father, Fred.

“In 1996 the college's Foundation—Kingsborough Foundation Inc., a non-profit—honored both Fred and Mary Trump at the college at a Gala which I attended, along with many hundreds of community members, faculty, staff, and politicians and business people,” Goldstein recalled. “Also in attendance was the entire Trump family, including Donald, who absolutely loved Kingsborough and the honor they offered his parents.”

“I believe the individuals behind the graffiti did research me,” he told Campus Reform, claiming that nothing like this had ever happened to him previously at KBCC.

"I think the atmosphere at the college has changed considerably, especially when it comes to Jews or those who might be considered Pro-Israel,” he remarked. “It appears that there are a number of anti-Semitic individuals at the college who like to cloak their hatred of Jews behind a camouflage of anti-Zionism and other rhetoric, but what it truly is, is the same age old hatred of Jews that has existed for centuries.

“I know others at the college and university are seeing it. These individuals I believe are inciting hatred and perhaps violence through their tainted discourse," he continued. “I now keep a baseball bat that was a gift from a former President who knew I loved baseball by my desk—it used to hang on the wall.”

Goldstein also said he will be buying a special lock to prevent anyone from using a pass-key on his office door, saying, “I just don't feel safe at all anymore.”

Anthony Andrews, the director of government affairs and public relations at Kingsborough, told Campus Reform that the school is aware of the incident, and has informed the New York City Police Department.

"Upon being notified by Mr. Goldstein of this incident, the Kingsborough Public Safety Department and the NYPD were notified," he said. "Kingsborough Community College strives to create a workplace and academic environment that excludes all types of harassment and discrimination."