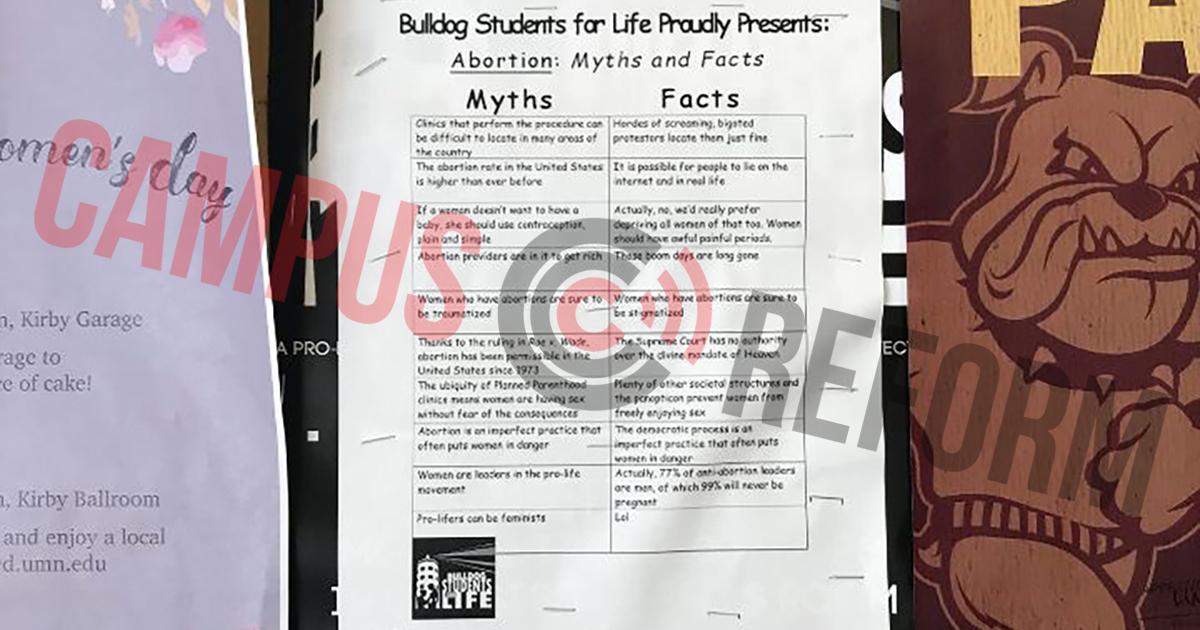 The only pro-life club at the University of Minnesota-Duluth has been targeted with fake flyers that frame the pro-life movement as incompatible with women’s empowerment.

The “Abortion: Myths and Facts” flyers appear to have the imprimatur of the school’s Bulldogs for Life club—featuring their name and logo—but the pro-life group insists that they were the work of a student unrelated to the club.

"We’re getting harassed on social media, through email, getting our posters torn down, and people even come up to us just to say they hate us."

“These fake posters have been put up without UMD or Bulldog Students For Life authorization” wrote Bulldogs for Life in a statement on Thursday. “They were not posted by the club, or anyone affiliated with the club.”

One “myth” is that “pro-lifers can be feminists,” the flyer claims, declaring that the “fact” of the matter is simply “LOL.” Another alleged “myth” is that “women are leaders of the pro-life movement.”

“Actually 77% of anti-abortion leaders are men, of which 99% will never be pregnant,” the flyer claims.

In an interview with Campus Reform, Bulldogs for Life Vice President Mika Colson said the flyers were disingenuous and inaccurate.

“It is hard when people overlook all the work that women are doing for the pro-life movement. But from my standpoint, men have just as much say in the issue than women do,” Colson told Campus Reform.

“There are a lot of people who say we hate women, but nothing could be further from the truth,” Colson added. “We want to help women and we also want to help the children who are not yet born.”

While it’s unclear what prompted the creation of the fake flyers, the president of Bulldogs for Life, Noah Maldonado, told Campus Reform that he isn’t surprised, saying the fake flyers—roughly two dozen of which have been spotted—are just another example of the “hostile” environment for conservatives on campus.

“We’re the only pro-life group on campus. It’s a really hostile environment,” he said. “We’re getting harassed on social media, through email, getting our posters torn down, and people even come up to us just to say they hate us.”

"A lot of people take us the wrong way,” he added. “And it breaks my heart that people don't see how hard we're working to help people and take care of people.”

Campus Reform reached out to University of Minnesota-Duluth for comment, but did not receive a response.

Maldonado said the administration has been kind and respectful about the situation, but he doesn’t expect the culprit to be caught, noting that “it’s a large campus.”