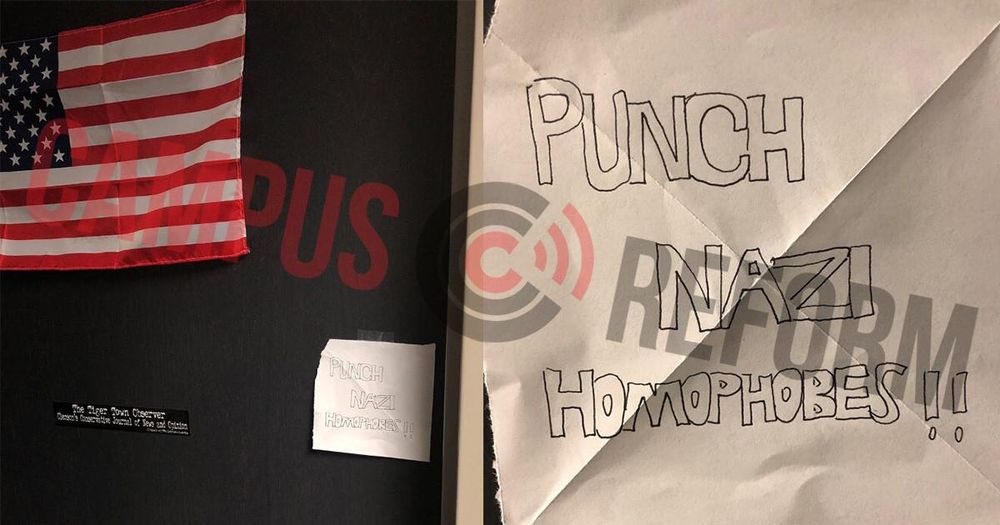 An unnamed Clemson University student recently placed a sign outside the office of a conservative student publication advocating violence against the “Nazi Homophobes” within.

“Punch Nazi Homophobes!!” proclaimed the handmade sign, which was taped to the office door of The Tiger Town Observer (TTO) last month in an apparent act of intimidation.

“I came into Tiger Media one day when I found a message on my door that said ‘punch nazi homophobes!!’ on it,” Jack Timmerman, a Clemson student and TTO writer who discovered the sign, told Campus Reform. “This was a shock to me because not only am I neither of those things; I always make an effort to get along with everyone in Tiger Media.”

This isn’t the first time the TTO has been threatened on campus. In December 2017, anonymous vandals tore up dozens of copies of a controversial TTO magazine issue dubbed “#NotSatire” and littered them across campus.

The satirical edition covered LGBTQ, Marxist, and Islamic topics, and TTO Editor-In-Chief Alexander Cullen reported as much as $200 in damages, but it’s unclear what Clemson University has done in response to this brazen destruction of property.

Following the latest incident of harassment against the TTO, Jackie Alexander, the assistant director for Tiger Media, emailed the media group’s individual members to reveal that it had been determined that the individual responsible was a member of Tiger Media itself.

“Recently, a vulgar sign was taped to the door of one of our member organizations after hours. We investigated the incident and discovered it was one of our members who hung the sign,” the email stated.

“This was incredibly disappointing and utterly unacceptable. This kind of behavior among our members will not be tolerated,” it added, declaring that “the incident has been addressed with both the individual and the organization.”

Tiger Media is composed of six student media organizations including the TTO, Tigervision, WSBF 88.1 FM, The Tiger Newspaper, the TAPS yearbook, and The Chronicle.

Campus Reform reached out to each of these organizations to determine if any of their members had hung the sign, but did not receive a response in time for publication.

Additionally, Campus Reform reached out to Tiger Media Assistant Director Jackie Alexander to determine the identity of the individual who hung the sign and how the situation was handled, but did not receive a response in time for publication. This story will be updated if a response is received.

“I think that Tiger Media handled the situation properly, and don't anticipate this type of behavior to repeat in the near future,” Timmerman said in reaction to Alexander’s email, but stipulated that people still need to hear about the discrimination against conservatives on campus.

“I think that people need to know that this kind of discrimination happens all the time,” he said, noting that people often misrepresent conservatives and “lie to try to get us physically attacked.”