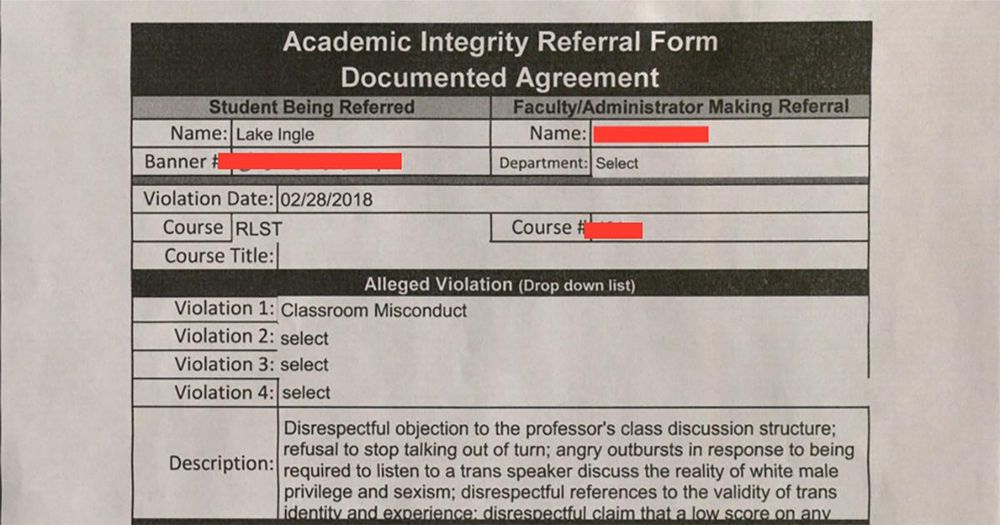 Nearly a month after a student was barred from attending a religious studies class, Indiana University of Pennsylvania (IUP) has reversed course, suspending normal policies and procedures.

Lake Ingle, a student enrolled in “RLST 481 – Special Topic – Self, Sin, and Salvation,” a course taught by IUP Professor Alison Downie that he needs in order to graduate, objected to his instructor’s claims regarding the “reality of white male privilege,” on February 28.

Ingle also rebutted claims made in a video shown in class that featured a transgender woman, stating that there are only two genders and arguing that the “gender wage gap” is a myth.

As originally reported by Campus Reform, Ingle was subsequently barred from attending class on March 2 via a letter from IUP Provost Dr. Timothy Moerland.

The incident appeared in national headlines, stoking public outcry, and Ingle reported in a Facebook status that a ruling on his case would be released on March 19.

President Eugene Delgaudio of Public Advocate, an organization that describes itself as “a dedicated group of young conservatives in Washington, D.C.,” filed a Letter of Complaint the morning of March 19 addressed to various federal authorities in response to IUP’s handling of the case.

“The student Lake Ingle must be be re-instated without anti-Science or anti-Christian biases being used as a criteria for his suspension or any punishment of sanction,” Delgaudio’s letter reads, adding that “An apology is warranted to Lake Ingle and all Christians and a policy of respect and non-harassment of Christian students must be adopted.”

“If you have been paying attention to the news or certain social media sites, you might get the impression that IUP is in some sort of crisis of identity or of quality or of failure to adhere to the basic principles of our society. This is just not true,” Driscoll proclaimed.

“More recently, as reported in some national and regional news, a student was temporarily removed from a class for behavior that the faculty member (and at least some classmates) viewed as disruptive to the learning environment,” he continued, adding, “the student chose to take his version of events to the media.”

After opining that a “more thoughtful” approach “would probably have resulted in a reasonable resolution of the matter, with significantly less anger and anxiety,” Driscoll acknowledged that a “thoughtful, dispassionate review of the matter” is now impossible, and announced that Ingle has been allowed back into the class.

“Based on a review of governing policies, last week the student was informed that he is allowed to attend class,” Driscoll reported, stipulating that “I have asked a senior faculty member with significant experience in the First Amendment and a long career as a successful classroom teacher to join the class as a monitor and a mentor for all.”

Driscoll also made clear his decision to “indefinitely pause the formal university process without resolution” in Ingle’s case, though he noted that he reserves “the option to restart the university’s formal processes.”

In regards to the case’s outcome, Ingle is chalking up the result as a victory.

“Though I am curious how the Academic Integrity Board would have ruled, I am thankful I can continue the course and graduate on time,” Ingle wrote in a Facebook status, concluding that “I am considering this a victory.”