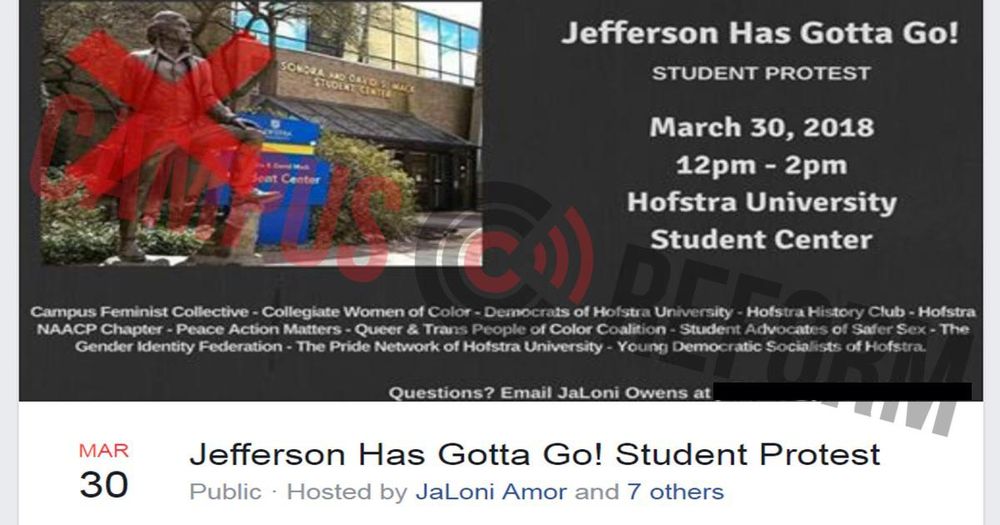 A statue of Thomas Jefferson has raised the ire of student activists at Hofstra University, who are demanding that administrators remove his visage from campus.

JaLoni Amor, a Hofstra student and Black Lives Matter activist, released a petition calling for the statue’s removal on March 17, proclaiming that Jefferson has been embraced as an “icon” by “white supremacist and neo-nazi organizations” like the Ku Klux Klan.

“The Sondra and David S. Mack Student Center is one of the central points for on-campus life and student activities,” the petition reads. “It is unfortunate then that a bronze sculpture of a 71-year-old Thomas Jefferson, gifted to the university by Hofstra Trustee David Mack, is right in front of the Student Center.”

“Jefferson has been embraced as an icon by white supremacist and neo-nazi organizations such as the Ku Klux Klan,” the petition continues, calling attention to Jefferson’s past as a slave owner who committed rape.

Shortly after, Amor created a Facebook event for an upcoming protest titled, “Jefferson Has Gotta Go!” slated for March 30. More than ten organizations are listed on the event’s flyer, including the Democrats of Hofstra University, Queer and Trans People of Color Coalition, The Gender Identity Federation, and Young Democratic Socialists of Hofstra.

“At noon on Friday, March 30, 2018 students will gather in front of the statue of Thomas Jefferson located in front of the Student Center at Hofstra University to protest its presence on this campus and the administration’s refusal to remove it!!!” the event’s description states.

Amor took to the page’s discussion section to elaborate on the event’s purpose.

“I drafted this petition to call on Hofstra University to F I N A L L Y remove the statue of Thomas Jefferson from in front of the Student Center,” Amor wrote, asserting that “Jefferson owned more than 600 slaves in his life time” and “preyed upon many of these slaves.”

Amor also addressed her fellow protesters, writing, “WHITE ALLIES - Please understand that this is a protest against white supremacy and that you as white people - even though you're allies - benefit from white supremacy!” and “PROTEST. Do not just come and take selfies for your Instagram feed or SO HELP ME GOD.”

“The leading black organizers will wear handcuffs around their wrists to honor our ancestors who were enslaved by Europeans and forced to build this country. If you want to volunteer to wear handcuffs, COMMENT!” Amor continued, stating, “HOPEFULLY, nothing will get physical. There's so many of us that anyone who tries will ..... lose ..... so I don't anticipate anyone trying!”

Not all students were supportive of the protest, however.

“Not to bring problems, but I'd like to point out that as you are making the protest about your right to freedom of speech, don't forget that people like Jefferson gave you that right,” Hofstra student Conor Dawson wrote in response to Amor’s post.

“Jefferson was one of the earliest anti-slavery advocates in the 18/19th century. He even proposed abolition and banning it outright in congress. Just do a little bit of basic reading on the subject and youll [sic] see that he stood for a LOT more than just that,” Alex McHale added.

“To add to the criticism here, Jefferson was not involved in eugenics. That movement happened in the early 20th century, long after Jefferson. Also, there is no evidence that he slept with any slaves besides Sally Hemings. I'd say you don't know as much about Jefferson as you think,” Ned Borninski concluded.

Campus Reform also reached out to JaLoni Amor to learn more about the protest.

“The sculpture in front of the Student Center has always bothered me,” Amor explained, referencing Jefferson’s past. “Perhaps it would be traumatizing if I hadn’t gotten used to the routine micro and macroaggressions I’ve dealt with while attending Hofstra University.”

“There are so many more appropriate places for this sculpture,” Amor continued, suggesting museums and archives. “This movement is not about editing history or erasing history. It’s honestly about preserving history, all of the history.”

Amor elaborated that the act of removing the statue would force students to confront the troubling aspects of Jefferson’s life that the protesters find objectionable.

“I think so many students want this statue to stay because for many of them, they were thought of when this nation was founded and remain the dominant, privileged demographic that is always thought of and catered to today,” Amor proclaimed. “I want to force them to look at their privilege and understand what their race means.”