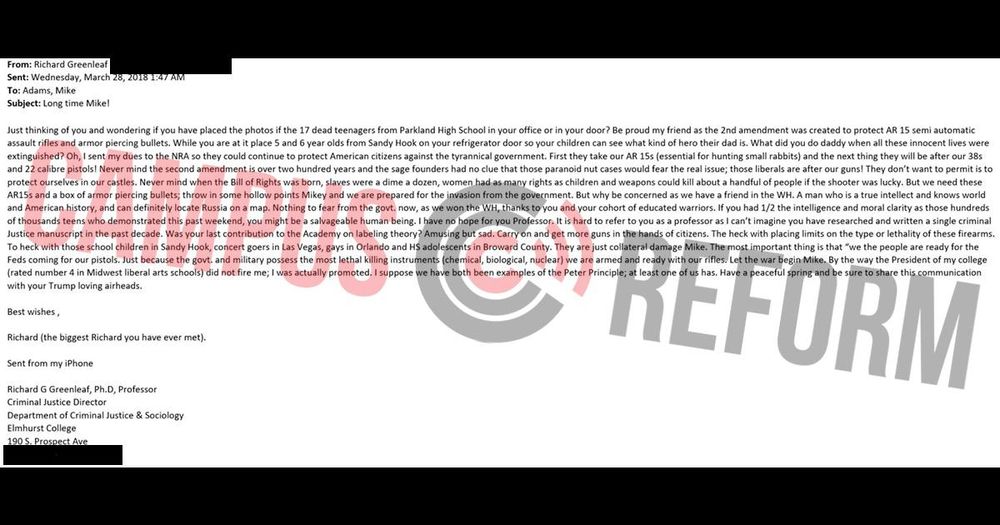 A professor of criminal justice at Elmhurst College is harassing conservative scholar Mike Adams for his pro-gun views, linking the academic to the school shooting in Parkland, Florida.

In an email obtained by Campus Reform, Dr. Richard Greenleaf urged Adams, a professor of criminology at the University of North Carolina-Wilmington (UNCW), to place photos of shooting victims in his office and on his refrigerator as a reminder to “be proud” of his support for the Second Amendment.

“Just thinking of you and wondering if you have placed the photos if [sic] the 17 dead teenagers from Parkland High School in your office or in your door?” Greenleaf began. “Be proud my friend as the 2nd amendment was created to protect AR 15 semi automatic assault rifles and armor piercing bullets. While you are at it place 5 and 6 year olds from Sandy Hook on your refrigerator door so your children can see what kind of hero their dad is.”

Greenleaf then went on an extended diatribe regarding the supposed obsolescence of the Second Amendment before questioning Adams’ academic credentials.

“If you had 1/2 the intelligence and moral clarity as those hundreds of thousands teens who demonstrated this past weekend, you might be a salvageable human being,” he continued. “I have no hope for you Professor. It is hard to refer to you as a professor as I can’t imagine you have researched and written a single criminal Justice manuscript in the past decade.”

According to Adams, Greenleaf has been sending him similar emails for many years, and has previously implied that he served as an inspiration for the Planned Parenthood shooting in Colorado Springs, Colorado in 2015.

Greenleaf’s latest message to Adams was sent at around 1:47 AM on Wednesday, and consists of a lengthy rant against the conservative scholar, including personal attacks and broad statements on gun control.

“Carry on and get more guns in the hands of citizens,” Greenleaf wrote sarcastically. “The heck with placing limits on the type or lethality of these firearms. To heck with those school children in Sandy Hook, concert goers in Las Vegas, gays in Orlando and HS adolescents in Broward County. They are just collateral damage Mike. The most important thing is that ‘we the people are ready for the Feds coming for our pistols.’”

“Just because the govt. and military possess the most lethal killing instruments (chemical, biological, nuclear) we are armed and ready with our rifles,” Greenleaf added. “Let the war begin Mike.”

The professor concludes his email by encouraging Adams to “be sure to share this communication with your Trump loving airheads,” signing off as “Richard (the biggest Richard you have ever met).”

In an email to Campus Reform, Adams raised concerns about Greenleaf’s behavior and mental stability, stressing that he does not even have children or own an AR15, as Greenleaf apparently supposed.

Adams further stressed that as a criminal justice expert, he knows “how important it is to keep firearms out of the hands of mentally unstable leftist professors,” adding that the situation “is especially urgent when those professors are trying to have arguments at 2 am with people who do not actually exist in reality.”

“Greenleaf is a one-man advertisement—both for mental background checks and against lifetime tenure,” the scholar remarked. “The fact that he concludes emails with references to his penis size raises additional concerns, which require no further elaboration.”

UPDATE: In an email to Campus Reform, an Elmhurst College official wrote that "in expressing his personal views, Richard Greenleaf does not speak on behalf of the college."

Greenleaf declined to comment on his email to Adams, which was sent from his Elmhurst College email account.