Dr. Marshall Derosa, who advises the TPUSA chapter at FAU, speculated that “either mental illness or demonic possession” drove the creation of the libelous posters.

Flyers have been popping up in various locations around campus falsely accusing a Florida Atlantic University professor of being a "white supremacist" with ties to a neo-Nazi organization. 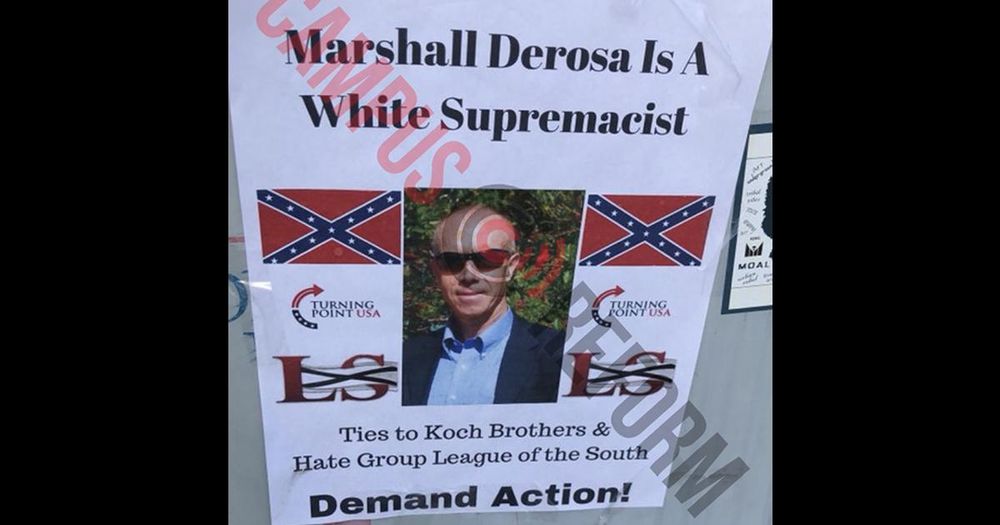 Multiple flyers at Florida Atlantic University are accusing a political science professor of being a “white supremacist” over his connection to conservative organizations.

The placards have appeared in several locations across campus and prominently feature a picture of Dr. Marshall DeRosa, who also serves as a faculty adviser to the school’s Turning Point USA chapter, with a caption that reads “Marshall DeRosa is a white supremacist.”

DeRosa’s photo is surrounded by the logos of TPUSA, a neo-Confederate group “League of the South,” and Confederate flags.

At the bottom of the posters, the activists claim that the academic has “ties to Koch brothers [and] hate group League of the South” while urging students to “demand action!” It was not immediately clear who was responsible for creating and distributing the flyers on campus.

When asked about his personal reaction to the posters, DeRosa told Campus Reform that “I must be doing something right to be a target of the radical Left and their useful idiots.”

According to DeRosa, the reference to “ties” to the Koch brothers likely stems from the fact that he received funding for the Civics Education Project, with which he taught civics at a maximum security prison.

“The foci of the program are individual responsibility, free markets, rights/duties, dignity of the individual, and LIBERTY,” he explained.

“The flyers posted throughout campus were a cowardly act,” she declared. “If any group or individual has a concern about our advisor or organization, we welcome discussion rather than anonymous, defamatory, and untrue attacks across campus.”

DeRosa said he suspects that “either mental illness or demonic possession” drove the creation of the libelous posters, and vehemently denies any connection to the League of the South.

In a recent interview with The Nation, Derosa explained that he had previously been a faculty member with the League of the South Institute, but cut ties with the group as it became more extremist.

"They’d invite me to things and I’d go to talk about my scholarship, especially the Confederate constitution, but I got an inkling as to some of the characters involved," Derosa said, adding, "I didn’t feel comfortable."

Indeed, Derosa took particular exception to a second flyer that labeled him a "nationalist."

“How dare they refer to me as a ‘nationalist,’” he exclaimed. “Someone might actually believe that accusation. I’m a Jeffersonian [r]epublican.”

Campus Reform reached out to the university for comment, but did not receive a response in time for publication.