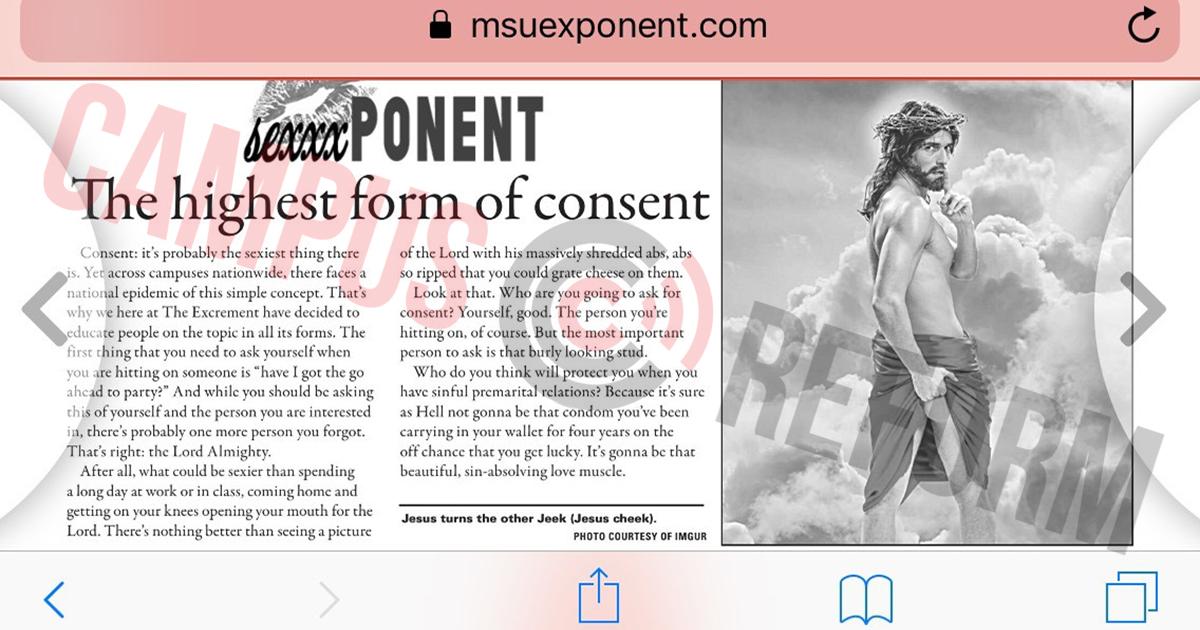 In an edition published just before Easter, the Montana State University student newspaper featured explicit references to performing sexual acts on Jesus Christ, who is depicted exposing Himself.

The student publication, funded by mandatory student fees, featured the piece, titled “The Highest form of Consent,” in its April Fool’s Day edition of the MSU Exponent, “sexxxPONENT,” a copy of which was provided to Campus Reform.

All students must pay an annual fee to subsidize the student newspaper.

“After all, what could be sexier than spending a long day at work or in class, coming home, and getting on your knees opening your mouth for the Lord,” the unsigned column states. “Who do you think will protect you when you have sinful premarital relations? Because it sure as Hell not gonna be that condom you’ve been carrying in your wallet for four years on the off chance that you get luck. It’s gonna be that beautiful, sin-absolving love muscle.”

This piece was featured just three days before Easter, the day of celebration of the resurrection of Christ.

The piece also includes a picture of Jesus giving a pouty “shush” face while bearing the crown of thorns and pulling up his undergarments to reveal his bare backside.

The caption of the provocative image reads, “Jesus turns the other Jeek (Jesus Cheek).”

All students enrolled at Montana State University must subsidize the Exponent at the rate of $2.65 per semester. These funds are only available to the Exponent, and no other alternative student publications. There is no option to waive the fee.

As of press time, the March 29 edition was not visible on the Exponent’s online archives, though three relatively inoffensive pieces from the same issue are available on the paper’s website.

UPDATE: The Exponent provided the following statement to Campus Reform regarding the publication:

"The editorial team decided, after publication, that the article in question was not in keeping with our content standards for satire. Additionally, after considering the timing of publication with Holy Week, we decided that removing the article from our online presence was the responsible decision.

“The MSU Exponent has been in print since 1895, sparing a few years during WWII. We have an extensive archive available for your perusal. You may access the archive via Montana State's campus library. I honestly do not know if any religious figures/icons/deities/etc. have been satirized before in the Exponent.”