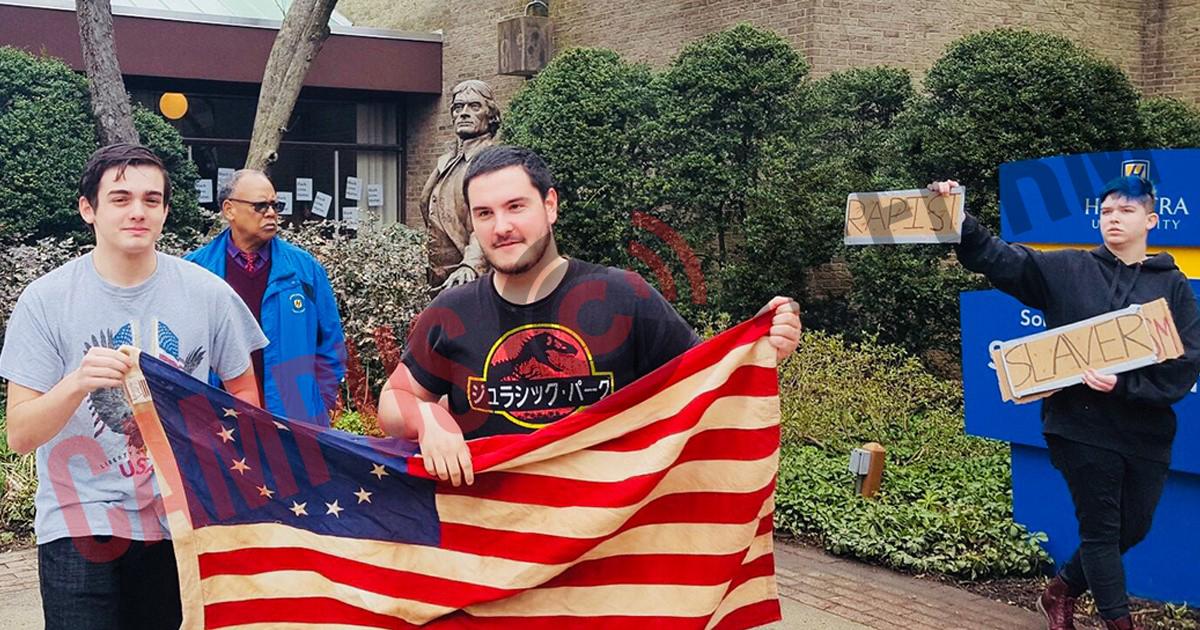 Hofstra University students held dueling protests Friday over whether or not to remove a statue of Thomas Jefferson from in front of the campus student center.

"We were disappointed with how it turned out because we felt that even though the whole point of the counter protest had been that we'd be heard as people, we really weren't."

The competing movements came to a head Friday, as some students in support of keeping the statue held an American flag in front of it, while another student thrust up signs reading “RAPIST” and “SLAVER.”

While the original protest for removing the statue was slated to be held outside the Hofstra student center, JaLoni Owens, the protest organizer, announced in a Facebook status that safety concerns had prompted the protest to be moved inside, elaborating that media wouldn’t be allowed in the event. “YOU DO NOT HAVE TO SPEAK TO PRESS!!!” Owens emphasized to her peers.

Despite the media ban, Campus Reform obtained video of the event taken by Kenneth Mulvena, a senior at Hofstra. Originally styled as a protest, the event quickly turned into a back-and-forth dialogue.

Some students stood watching the stage, holding signs like “Black Lives Matter,” and “stop rewriting history.” Projected onto a PowerPoint screen at the rear of the stage was a slide titled, “Ground Rules,” stating, “NO HATE SPEECH,” among other rules.

Students took to the podium citing Jefferson’s history as a slave owner as a reason to remove the statue from campus.

“This is literally, like, hurting black and brown people. You’re just like ‘but, but Thomas Jefferson did this,’ yeah but he owned slaves, and he’s right in front of our student center and he hurts people of color on this campus every day,” one student proclaimed.  “Like, all white people, just take a step back, and look at your actions and consider, ‘are you being a shitty white person?’”

“[Thomas Jefferson] literally did not give me any rights. He didn’t give half the people in this room any rights, so don’t tell me that he gave me rights, because he didn’t. He took them away from me a century before, when America stole Mexico’s land,” another protester told a cheering crowd.

“America stole a lot from me, and from my people, so I don’t really give a shit about anything that created America, because they took it all from Mexico, and from other countries,” the protester continued, adding, “I want y’all to know, that the Declaration of Independence and the Constitution didn’t do anything for people of color or queer people or nonbinary people or anybody else except white, straight men.”

Other students spoke out in favor of keeping the statue.

Richard Caldwell, the student who created the petition in favor of keeping the statue, said “I was originally not going to get involved in this, even though I disagreed with the statue being taken down, until we were falsely accused of being white supremacists and racists for simply wanting the statue to stay up.”

“I was shocked at this accusation, because I’ve never been called that,” Caldwell continued, adding that the statue was important for a continuing dialogue on U.S. history.

Another Hofstra student, Russ Ahlfeld, was called out directly by protesters for standing with the pro-Jefferson crowd, but didn’t rise to the bait, seeking to maintain a constructive dialogue.

“I remember that you told me I was a really cool person, and here I am and you’re over there,” a protester remarked, snidely adding, “Come here, come talk, Russ.”

“You can be friends with a person and maybe believe something different or completely the opposite, but still be friends with them,” Russ remarked, taking the stage. “I think that’s okay, and I think that all we really should be doing here today is talking and listening to each other.”

Conor Dawson, another Hofstra student who gave a short speech advocating respectful dialogue, described how the notion was met with derision from the opposing side.

“Richard and I went up to give our speeches which equated to ‘listen to the other side and maybe you'll like get a new perspective’ or something like that,” he told Campus Reform. “These were greeted with Boos and jeers from the opposite crowd including one of them yelling at us that we were white supremacist.”

“We were disappointed with how it turned out because we felt that even though the whole point of the counter protest had been that we'd be heard as people, we really weren't,” Dawson concluded.

Echoing Dawson’s sentiments, Mulvena stated, “Some protesters were considered and respectful of everybody, but many were very rude to those that wanted to make counterpoints and statements.”