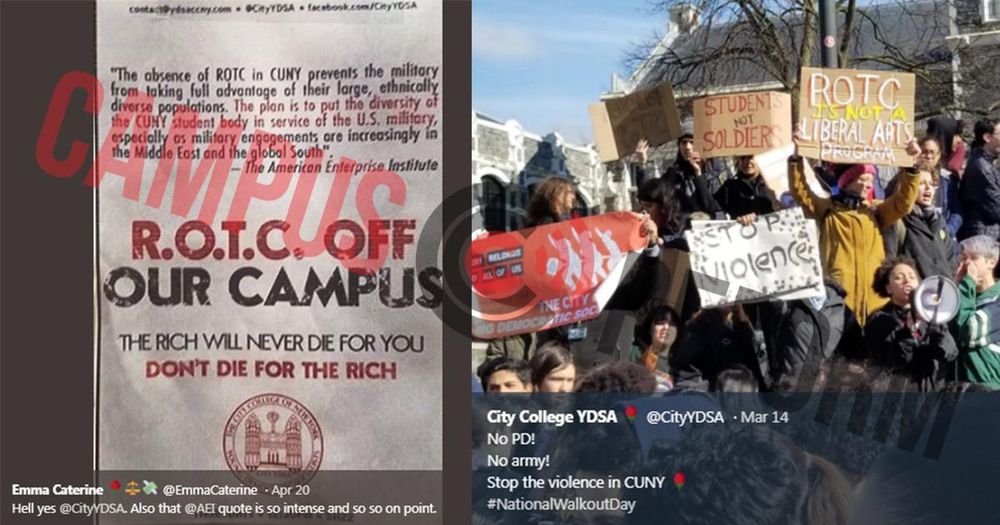 The Young Democratic Socialists of America (YDSA) at The City College of New York (CCNY) is demanding that the school remove the Reserve Officers’ Training Corps (ROTC) from campus.

On April 20, an individual posted a picture of a CCNY YDSA poster via Twitter bearing the header “R.O.T.C OFF OUR CAMPUS,” and sub-header, “The Rich Will Never Die For You Don’t Die For The Rich.”

Additionally, the top of the poster presents a quote purportedly taken from the American Enterprise Institute declaring that “The absence of ROTC in CUNY prevents the military from taking full advantage of their large, ethnically diverse populations. The plan is to put the diversity of the CUNY student body in service of the U.S. military, especially as military engagements are increasingly in the Middle East and the global South.”

While the first sentence appears to be taken from a 2011 case study into the tumultuous history of ROTC programs in New York City, however, the second sentence does not appear anywhere in the paper.

This is far from the first time that CCNY YDSA has spoken out against ROTC, let alone the police and U.S. military as a whole. In February, the group tweeted a photo of a U.S. Army ROTC recruiting poster with the caption, “Let those who wage war, fight war. ROTC off our campus.”

Moreover, in March, the group participated in the anti-gun national student walkout, tweeting pictures of members marching across campus.

“No PD! No army! Stop the violence in CUNY #NationalWalkoutDay,” the tweet’s caption reads, alongside pictures of CCNY YDSA members holding signs reading, “Students Not Soldiers,” “Stop Violence,” “Police the Police,” and “ROTC is not a Liberal Arts Program.”

Additionally, in one Facebook status depicting a broken AR-15 rifle, the group called for the disarming not only of “white supremacists,” but also of the police and military, in what it described as an effort to “rebuild a broad youth front against militarism.”

In December 2017, the group tweeted pictures of its members marching in the streets of New York with the caption, “We were honored to have marched alongside our brothers and sisters against the brutal colonialist project that is Zionism.”

Similarly, on March 25, the group tweeted, “At @CityYDSA we're working with our Palestinian classmates and comrades against the zionist groups on campus, university divestment, and severing of ties with the NYPD and Campus Security (re: deadly exchange).”

The group also hosted an event in March titled, “Discussing State Violence,” along with CCNY Students for Justice in Palestine, the Dominican Students Association, Students Without Borders, and the school’s Black Student Union.

“The violence epidemic sweeping the nation has taken hold of our campuses for too long. Institutions that should foster freedom of expression, critical thought, and innovation are now permeated by fear and trepidation,” the event description proclaims, urging students to “approach the problems of colonization, incarceration, and oppression that gun legislation cannot address.”

Campus Reform reached out to CCNY YDSA, but did not receive a response in time for publication.