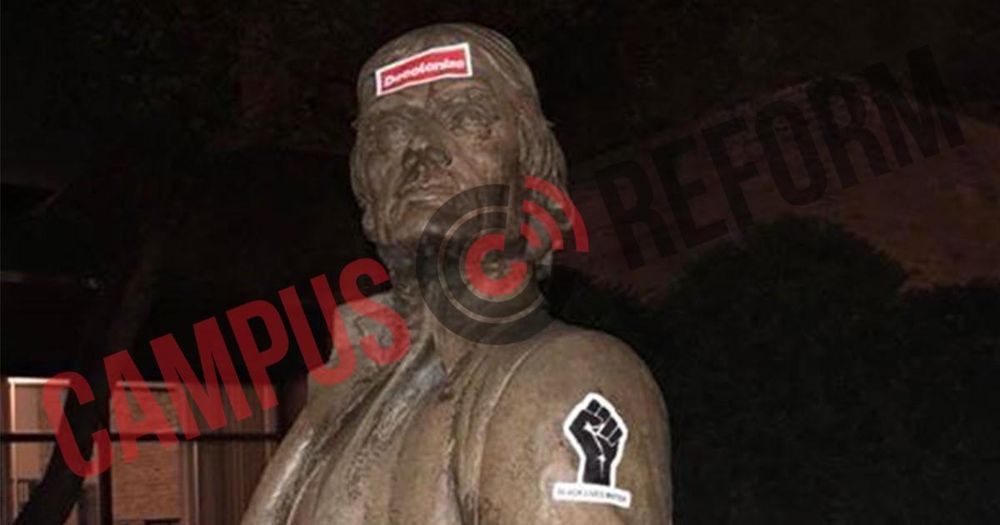 A Thomas Jefferson statue at Hofstra University has been repeatedly vandalized in the wake of dueling student demonstrations over whether it should be removed from campus.

On April 2, students protested for and against the removal of the statue outside the Hofstra student center. Some students held the American flag in front of the statue and protested against the erasure of history, while others carried signs reading “SLAVER” and demanded the founding father’s removal.

Images obtained by Campus Reform show that the Jefferson statue has since been vandalized multiple times.

Stickers reading “Decolonize” and the text “Black Lives Matter” alongside a clenched fist were placed on the statue on April 19, leaving residue on the statue.

Additionally, on April 20, the statue was marred with white spray-paint, and a paper bearing the words “Black Lives Matter” was taped to the statue’s forehead.

This latest string of vandalism comes shortly after the group of protesters demanding the statue’s removal declined to attend a scheduled meeting with Hofstra University’s president, Stuart Rabinowitz, hours prior to the appointed time.

“As of this morning, the student organizers have declined the invitation to meet with President Rabinowitz,” protest leader JaLoni Owens wrote in a Facebook status, objecting to the administration’s meeting terms, including an allotted three-minute speaking time and that “All students are expected to share their thoughts in a respectful and civil manner.”

“Given that we are now right back where we started, the ‘Jefferson Has Gotta Go’ Campaign will proceed with our next moves and exercise all avenues to uphold the values Hofstra University has failed to uphold itself,” Owens’ status concludes.

“If administration believes that a fruitful meeting about this issue could ever occur without the students who have brought this issue back into the forefront and under the communicated terms...we have a lot more work to do here than we originally thought,” Owens continued in another Facebook status, attaching a picture of an email from Dean of Students Sofia Pertuz.

“We are disappointed that you are rescinding your acceptance to attend today’s listening session. The invitation to attend this meeting remains open should you or any of the students on the organizing team you represent still wish to attend,” Pertuz’ email reads.

Joshua Jordan, the Hofstra College Republicans (HCR) member who discovered the initial vandalism along with a classmate, told Campus Reform that “We were both disgusted, as well as upset when we found them.”

“Given the fact that the protesters pulled out of the town hall meeting with the University administrators, we knew that they were trying to make a statement in other ways,” Jordan added.

Conor Dawson, another pro-Jefferson student involved in the protests, also expressed disappointment that the opposing side didn’t show up to the meeting.

“Most of the senior administrators were at that meeting, and it was disrespectful to them as well as us to decide our time wasn't worth it,” Dawson stated, calling the vandalism immature.

Richard Caldwell, the Hofstra student who discovered the white spray-paint on the statue, echoed Dawson’s thoughts, stating, “All along we’ve only wanted to have a civil conversation with the opposing side, a request that has either been shunned away or met with insults before.”

“That is why I was greatly saddened to find the representatives from the opposing side had elected to not only opt out of the meeting just hours before it, but to publicly lambaste the meeting and the administration on social media,” Caldwell continued, adding that “just because someone doesn’t like something, doesn’t mean they can deface or damage someone else’s property.”