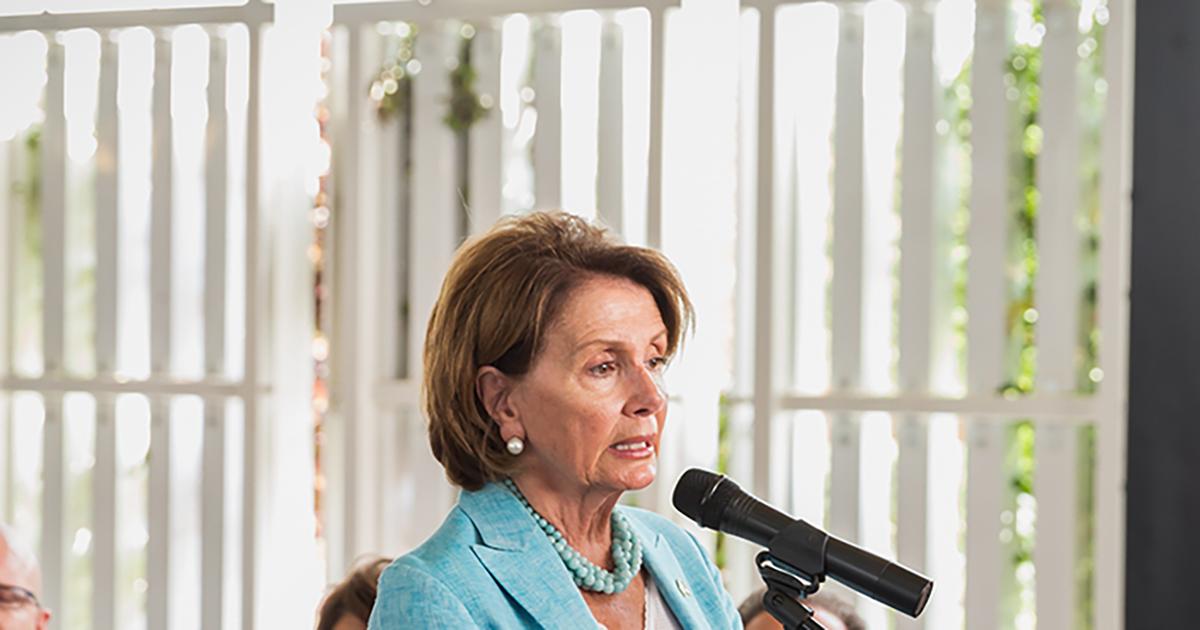 Conservative Georgetown University students called out Nancy Pelosi to her face Tuesday for her derisive comments about ordinary people getting “crumbs” from Republican tax cuts.

Georgetown’s Institute of Politics and Public Service hosted the House Minority Leader Tuesday for a town hall titled “Better Deal for America.” The title referenced the “better deal” slogan that has headlined the Democrats’ 2018 midterm campaign, which in turn alludes both to President Roosevelt’s New Deal and President Trump’s affinity for deal-making.

"My statement was really a fuller statement, that says, ‘While they provide a banquet for the top one percent, they are giving some crumbs to other people.’"

Pelosi posted a video of the event on her YouTube channel, which included an hour of questions from the audience.

A freshman student from Virginia identifying himself only as Sam made the biggest splash when he challenged Pelosi over her comments on the Republican tax legislation.

“You’ve spoken about the effects of the Republican tax plan, specifically referring to its effects on average Americans as ‘crumbs,’” Sam noted. “As the son of small business owners, I know that it’s helped my parents hire more employees, it’s helped us pay off our mortgage, helped put me through college.”

He also reminded her that “on a macroeconomic level, the economy is growing [and] wages are rising for the first time in years,” asking, “Would you still refer to the effects of this tax plan on average Americans as crumbs?”

“Yes there are some benefits that some are feeling in a particular way with the tax bill,” Pelosi responded after thanking the student for his question.

She then attempted to clarify that “my statement was really a fuller statement, that says, ‘While they provide a banquet for the top one percent, they are giving some crumbs to other people.’”

She spent the rest of her answer trying to justify her understanding of the bill with various claims, but did not further address Sam’s specific question.

At another point in the proceedings, junior Hunter Estes asked Pelosi about free speech on college campuses.

“You were just talking about expanding freedoms, so my question is about freedom,” Estes said, lamenting that “it is not rare today to see groups shout down speakers that they’re opposed to or speech they do not like,” and asking Pelosi how we can “move forward as a nation” and “revive respect for the free speech rights of political opponents.”

“Put me down as one who just says, ‘Don’t make a fuss. If somebody’s gonna come and speak, just let ‘em  speak,’” Pelosi replied.

“That doesn’t always go over well in my district in San Francisco,” she continued, noting that while she had picketed speakers in her youth, the speaker she remembers picketing was an anti-Semitic Communist from the Soviet Union.

Pelosi also spoke out against litmus tests for Democratic candidates, specifically abortion, arguing that while she, as a Catholic, adheres to Church doctrine, she believes others should have a choice.

The last question she answered was from an illegal immigrant student, who took Congress to task for its inaction on DACA and asked how Pelosi thinks elected officials can help immigrants while also doing “right by the American people.”

“We will pass legislation to protect the Dreamers,” she vowed, but argued that passing a recent bill extending DACA was not worth the increased enforcement efforts that Republicans were demanding as a condition for their support.