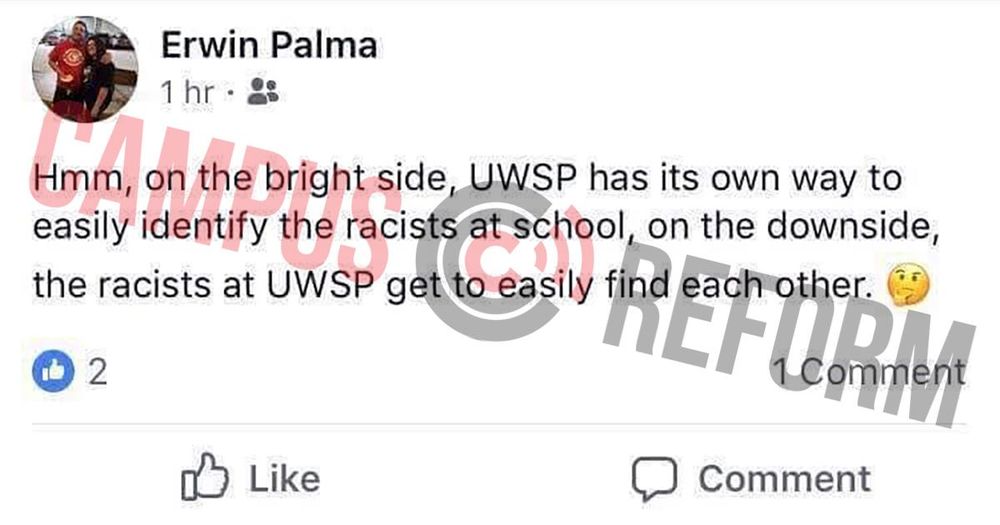 A former employee of the University of Wisconsin, Stevens Point is targeting conservatives on campus by publicizing a College Republicans contact list on social media.

In an April 19 Facebook post, Erwin Palma, a recent graduate and a former employee of the university, targeted dozens of conservatives by publishing screenshots of their names and labeling them “racists.”

Images obtained by Campus Reform, show that Palma was specifically targeting members of the College Republicans, including a faculty advisor of the student organization and those who simply signed up to receive CR emails.

Students from across the political spectrum have condemned Palma for his post, accusing him of making unfair generalizations.

“I am repulsed,” said Hannah Dee, a UWSP student associated with the “UWSP Green Party,” in response to the post. “To assume the College Republicans on Steven’s Point all share identical views and to go as far as labeling them all as racist is counterproductive, aggressive, and hypocritical.”

Dr. Justin Rueb, the faculty advisor of the student group, also blasted the former university employee, arguing that “the generalization (stereotyping) of any identifiable group is inappropriate.”

“In this particular case, the statement flies in the face of historical facts and is also counter to our (UWSP) attempt to instill the concept of civil discourse,” the professor added.

In the comment section of the original post, Palma addressed such objections by declaring that “as someone who is a target for multiple forms of violence and oppression fueled by the Republican Party, I actually feel like you have no place in telling me how to treat Republican supporters.”

Palma also attempted to justify his post by stressing that he only intended it to be visible to his Facebook friends, whom he evidently felt would appreciate knowing the names of every student who has agreed to receive emails from the College Republicans.

“I happened to log into my email, and I noticed that now the campus has groups that you can create and people can request to join,” he explained in response to another user. “It’s basically opt-in mailing lists.”

“When I took the screen shots and posted them, they were meant for everyone in my friend’s [sic] list,” he continued. “No one outside my friend list can see the pictures unless someone tags someone else (like you have). I really don’t mind the consequences of what this leads to, but you should know that I already have people sending messages about the reasons I am wrong in calling people that support a racist political platform racist.”

In a statement to Campus Reform, a UWSP spokesperson argued that “because the person who posted this is not a UW-Stevens Point student, nor an employee, campus administrators cannot pursue a student conduct process.”

“UW-Stevens Point values diversity and freedom of expression for all,” the official continued. “It is remains committed to a learning environment that respects multiple viewpoints and ensures discourse is civil and fosters personal responsibility.”

Palma did not respond to Campus Reform’s request for comment.