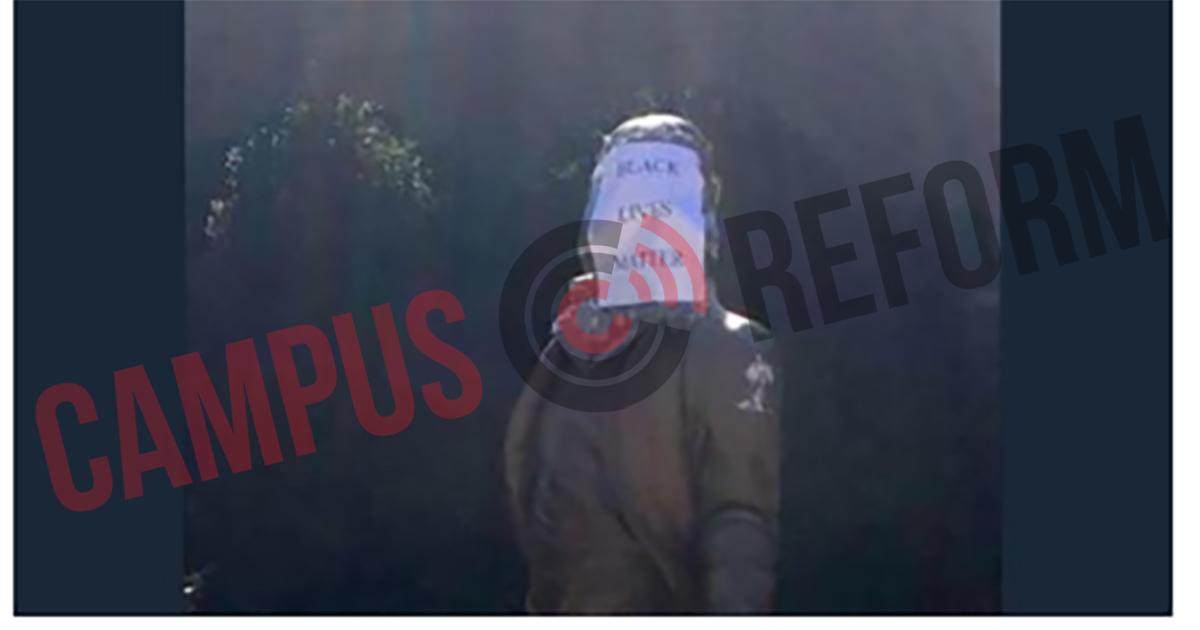 On April 19, images obtained by Campus Reform revealed vandalism of the statue in the form of stickers reading “Decolonize” and the text “Black Lives Matter” alongside a clenched fist, leaving noticeable residue.

"I'm afraid that, as a matter of law what you've described is vandalism, not to mention against the campus code of conduct..."

Similarly, on April 20, a student discovered white spray-paint in the rough shape of the Black Lives Matter sticker on the statue’s shoulder, along with a paper reading “BLACK LIVES MATTER” taped to the statue’s forehead.

Now, several students leading the charge to remove the statue have admitted to perpetrating and supporting the placement of the Black Lives Matter sign previously taped on the statue.

“#ThomasJefferson is a racist rapist that should not be at the entrance to the student center on Hofstra University. He created the system and institutions of oppression that poc, esp blk folx, still struggle under. And since the admin refuses to take action we are. #BlackLivesMatter,” Hofstra student Ethan Duran wrote in a Facebook status, along with a picture of the vandalism.

“So, do you admit responsibility for vandalizing campus property?” an individual named Alex Garcia asked in the post’s comments section, to which Duran replied that “any ‘vandalism’ that has been done by our group is just printing out a piece of paper from THE UNIVERSITY'S own printers and taking THEIR tape and putting it up on his face.”

“I'm afraid that, as a matter of law what you've described is vandalism, not to mention against the campus code of conduct; along with the spray paint, stickers, other defacement,” Garcia continued in another comment.

Hofstra student JaLoni Owens, a leader of the anti-Jefferson protest movement, also fessed up to the vandalism in another Facebook status, writing that “the only ''''vandalism'''' (if it can even be called that) we have ever done/supported is the taping of 8.5x11 sheets of paper with 'Black Lives Matter' printed on it to the sculpture of rapist and slave owner Thomas Jefferson.”

Moreover, according to the protesters themselves, it appears that at least one vandal may receive a punishment from the university.

“The student who posted a printed and taped paper that reads ‘Black Lives Matter’ on Thomas Jefferson was called by Public Safety in reference to ‘defacing property.’ Update: In P-Safe. This student is being referred to the Dean and disciplinary actions may or may not follow,” Owens wrote in another status, adding, “Printed using Hof’s printers and some scotch tape. Super rad.”

“[W]ho do I have to call? I will call whoever I need to do I can complain and defend whoever this is especially if it’s a black student or student of color. let me know what you need,” a Hofstra alumnus wrote in the comments. “U r a gem!!! The student is Mexican! They were told to call community standards Monday and make an appointment,” Owens responded.

Campus Reform reached out to student Duran, Hofstra University, and Hofstra University Public Safety, but did not receive responses in time for publication. This story will be updated if and when a statement is provided.