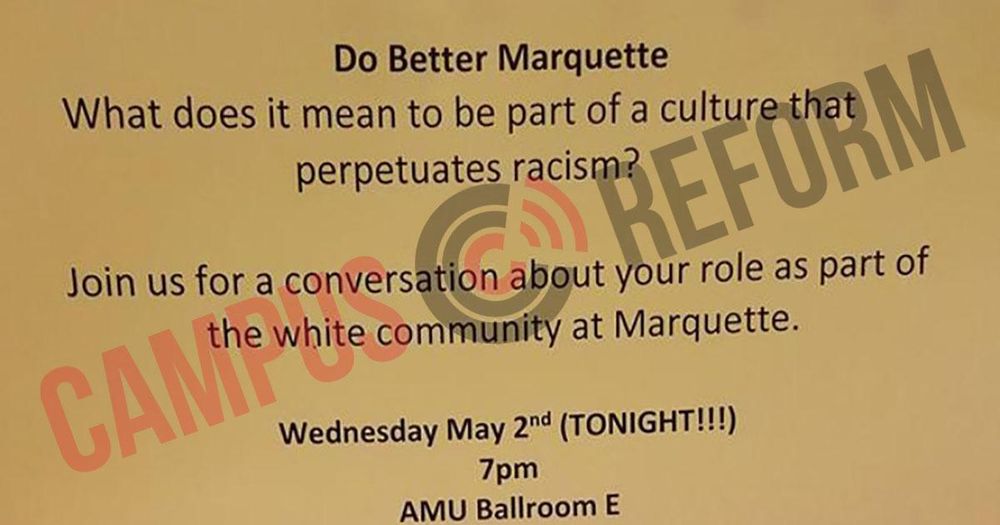 Marquette University held a forum Wednesday for the “white community” to reflect on how it “perpetuates racism” after a racially charged photo began circulating on social media.

The photo depicts four white males, two of who are holding toy guns, posing in front of a mirror with a black doll. The university has determined that only one of the four individuals is a Marquette student, adding that the photo “was taken more than a year ago in another state.”

Administrators initially released a generic statement calling the incident “completely unacceptable,” eliciting a firestorm of criticism from students complaining that the university did not take some form of concrete action.

“I have the right to be at this university just like every other white student. I worked my ass off for my spot, twice as hard,” one student complained on Twitter. “And for the Lovell to laugh in the face of my struggle and oppression. Go f**k yourself. I am Marquette too.”

“Admin needs to stop with the ‘Marquette doesn’t tolerate this’ bull****,’” another student declared. “Many students here are RACIST, gun worshipping hillbillies who hate minorities and refugees and I for one am not surprised one bit.”

“Hate crimes have no place on our campus,” added a tweet from the Marquette College Democrats. “We expect Marquette University to hold these students accountable for their appalling behavior.”

Marquette President Michael Lovell acknowledged such complaints in a lengthy series of tweets on April 27, saying he has heard the phrase “Do better, Marquette” from students and declaring that “we have much more to do in the days, months, and years ahead. Actions, not only words.”

Lovell concluded the tweetstorm with a photo of himself holding a sign that read, “I stand against racism because ‘privilege’ means using your position to speak up and bring about change.”

“Our job at Marquette, which we will do much more of, is to help provide safe spaces, provide support for our students of color but also for our majority students to provide tools that we need so we will be able to engage in meaningful conversations, solutions, and dialogues that not only make Marquette better, but our city, and then our state,” Vice President of Student Affairs Xavier Cole told the Marquette Wire Tuesday. “We’ll start there.”

The very next day, the school’s Division of Student Affairs and Office of Mission and Ministry co-hosted a “Do Better Marquette” event at which a guest lecturer from the Young Women's Christian Association, Martha Barry, stated that students must recognize “white skin privilege.”

In an interview after the event, Barry explained to Campus Reform that “privilege to many people means monetary privilege,” and that the goal of the event was to make people aware that “there is a privilege that comes with being white skinned,” adding that

“We are biased in the direction of white skin color,” she elaborated. “So, even if you were talking to people of color...there’s ‘colorism’ that, like, the lightest-skinned one are the most acceptable ones.”

“What does it mean to be part of a culture that perpetuates racism?” asks a flyer for the event obtained by Campus Reform. “Join us for a conversation about your role as part of the white community at Marquette.”

“With the events of the last week and ongoing concerns about campus inclusion, we as members of the white community must take an increased responsibility to learn about our role in contributing to racism on campus and in our communities,” the description added, saying that “in doing so, we can take responsibility for our role in creating change for equity and justice for everyone.”

Spokespersons for Marquette did not respond to inquiries from Campus Reform, nor did Dr. Cole. President Lovell declined to comment.