The campus was engulfed in protests last year after a professor questioned the wisdom of a "Day of Absence" event that asked white students and faculty to leave campus for a day of diversity training.

The Evergreen State College in Washington is preparing for a nearly-$6 million budget cut to compensate for an expected 20% decrease in enrollment next year. 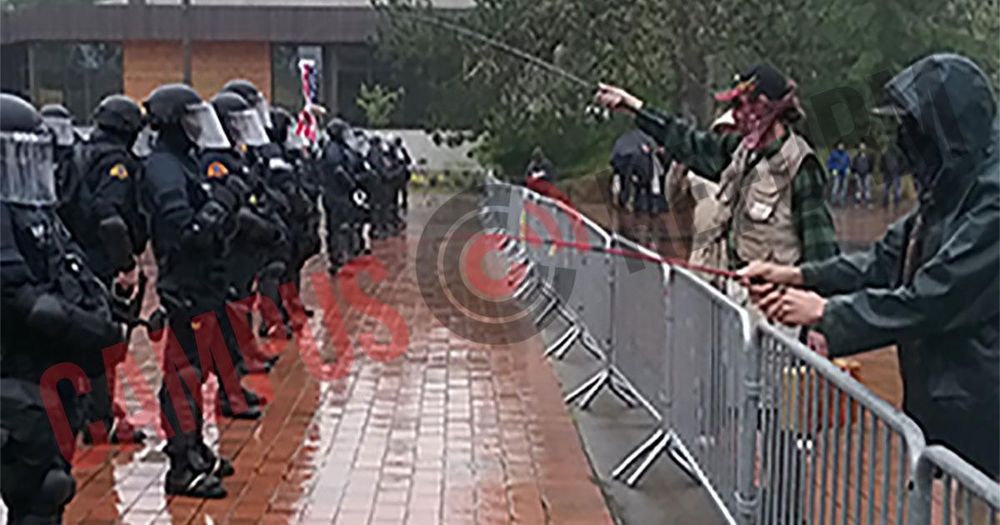 Evergreen State College has announced that it is planning to cut $5.9 million from its budget in an effort to offset a rapidly declining enrollment rate.

The cuts were outlined by President George Bridges in a May 8 memo to the Board of Trustees, and are accompanied by plans to raise various student fees by hundreds of dollars, The Olympian reported last week.

The announcement comes nearly a year after the college was rattled by riots following former professor Bret Weinstein’s decision to question the school’s “day of absence,” which involved asking white students to leave the grounds for a day of off-campus programming while students of color participated in on-campus workshops.

After besieging Weinstein in his classroom, student protesters proceeded to hold Bridges and several other administrators hostage in the president's office, temporarily refusing even to let Bridges use the bathroom unless he agreed to adopt their demands for additional diversity-related initiatives.

According to a report released by an “Independent External Review Panel” in April, the college is expecting a decline in applications for the Fall 2018 semester of up to 20 percent, compounding the 4.5 percent decrease in Fall 2017, compared to Fall 2016.

“Further declines in applications (possibly by as much as 20%) and enrollments are expected for the Fall of 2018 based on current year-to-year data,” the report noted. “This condition, and the revenue shortfall it will create, will present Evergreen with significant financial challenges that will not be short-lived.”

Acknowledging that “Evergreen can no longer be considered a ‘selective’ college in terms of admission” because it currently accepts about 95 percent of all applicants, the report also points out that the percentage of students of color on campus continues to edge upward despite the decrease in overall enrollment.

Notably, it also cites a survey showing that 60 percent of first-year, four-year students who enrolled at Evergreen State in Fall 2017 “identified themselves as LGBTQIA.”

A former Provost and Vice President of Academic Affairs of Evergreen State College, Michael Zimmerman, told Campus Reform that he believes that the declining enrollment is a result of last year’s protests.

“While it is all but impossible to determine why any one student opts not to apply or to attend Evergreen, when hundreds of them make the same decision, it's difficult not to form an opinion,” Zimmerman said.

“In this case, the most likely explanation, indeed, the only viable explanation to my mind, is that the impact of last year's events are playing out in the enrollment numbers,” he continued, noting that “any web search for Evergreen brings up scores of pieces dealing with last year's riots and the handling of them by the administration.”

While Zimmerman said that Evergreen State could recover if it “[comes] to grips” with what happened last year, he also argued that the college has created a “false history” of the notorious protests and demonstrations.

“That myth revolves around the false belief that Evergreen has been and continues to be under attack from the alt-right because of its progressive stance,” he said. “That myth largely blames one faculty member for causing the furor, partly by being racist and partly by speaking to Fox News.”

“The reality, however, is very different,” Zimmerman insisted. “Reasonable discussion of complex issues on campus was and continues to be shut down.”

Zimmerman also said that the protests could have been handled much differently, specifically criticizing the decisions made by the administration, and their unwillingness to learn from their mistakes.

“The fact that the police chief subsequently resigned her position because she was not permitted to do her job in a manner that protected the people she was charged with protecting also speaks volumes about the handling of the situation,” he maintained.

Likewise, the former provost argued that by hiring the student “largely responsible for the most egregious actions” during the riots to rework the student conduct code indicates that “no meaningful lessons were learned.”

The Board of Trustees is slated to vote on the proposed budget cuts in June.