The statement strongly implied, however, that Kent State would prohibit all firearms if it could, noting that state law only allows it to regulate the "privileges" of those affiliated with the university.

Kent State had to explain to outraged gun-control advocates that it was perfectly legal for a recent graduate to pose for photos on campus while openly carrying an AR-10 rifle. 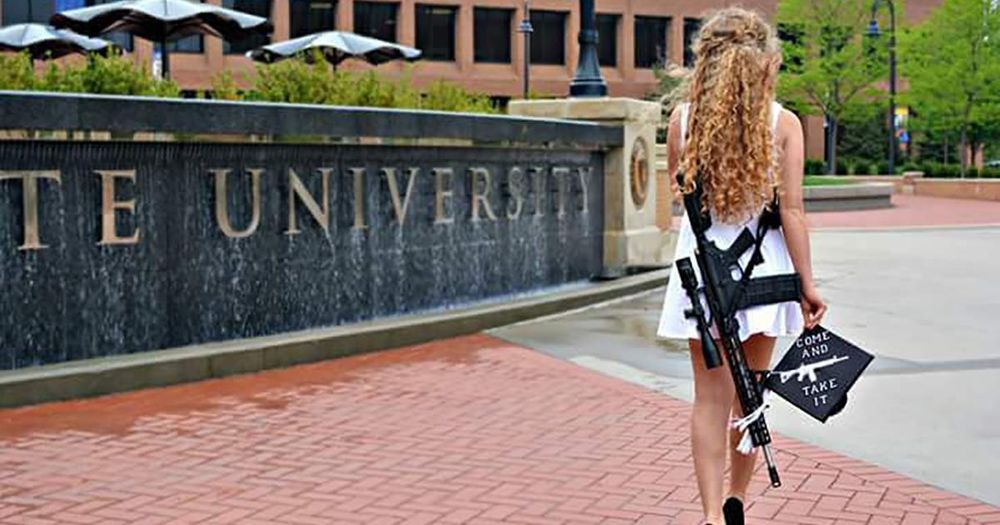 Kent State University recently explained to outraged gun-control enthusiasts that state law made it impossible to prevent a recent graduate from posing for photos on campus with her AR-10.

As previously reported by Campus Reform, Kent State graduate Kaitlin Bennett recently called for #CampusCarryNow by tweeting a picture of herself on campus with an AR-10 slung across her back.

“Now that I graduated from @KentState, I can finally arm myself on campus,” she tweeted last week. “I should have been able to do so as a student—especially since 4 unarmed students were shot and killed by the government on this campus. #CampusCarryNow.”

Shortly after the photo went viral on social media, the founder of Moms Demand Action for Gun Sense in America, Shannon Watts, questioned Kent State on Twitter, asking if the school will take action against the student.

“@KentState: Does this violate your weapons policy? If so, what action will you take regarding this student?,” Watts tweeted on May 17. “Please let parents of prospective college students know ASAP.”

The very same day, Kent State issued a statement outlining its policy and stressing that everything in the photo was legal under state law.

“We realize some in our community may have become concerned following media coverage of a recent graduate who posted a photo holding a rifle on our Kent Campus,” the university wrote.  “Let us assure you that our campus is safe and that what you have seen in the photo was legal under Ohio law.”

The school made clear, however, that it is not responsible for the fact that Bennett and other “visitors” to campus are allowed to carry firearms.

“The State of Ohio, not Kent State University, allows the public to openly carry a deadly weapon on state property, which includes our eight-campus system and all other public campuses across Ohio,” the school stated, noting that its Board of Trustees only has the power to regulate the “privileges” of “students, faculty, staff, and third parties doing business with Kent State.”

The statement also claimed that the school “was recently ranked the safest big college campus in Ohio,” and stressed that the university has a police force that is well-trained.

Despite noting that students, staff, and faculty are forbidden from carrying weapons on campus, KSU explained that “graduates no longer taking classes would be considered ‘visitors’ to campus and would be permitted under state law to openly carry outdoors.”

In a statement to Campus Reform, university spokesperson Eric Mansfield said that while it was not strictly necessary, Bennett did notify campus police that she would be carrying openly on campus.

“[Kaitlin’s] call to notify police that she was carrying openly on campus was made only as a courtesy but was not required,” the official said.

Bennett told Campus Reform that she is “embarrassed” on Kent State’s behalf for putting out the statement.

“They are bragging in this statement that it's not their fault that guests can carry and that they prohibit students from doing so,” she said, calling it “disgusting” that the school would boast of its anti-gun policies while complaining that it cannot prevent guests from carrying firearms.

Bennett also noted that her original purpose in taking the picture was to show how outrageous it was that she could open-carry a rifle on campus upon graduating, but could not even carry a handgun while she was a student.