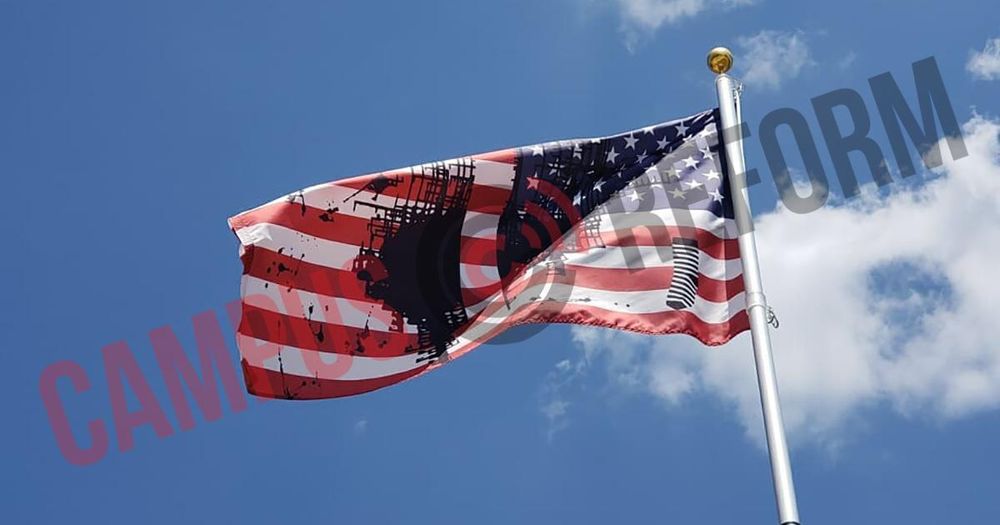 The University of Kansas is hosting a display on campus featuring an American flag that has been smeared with black paint by an artist as a commentary on “the current political climate.”

The artist is being featured at KU as part of an ongoing project sponsored by Creative Time, a New York based organization focused on three core values: “art matters, artists’ voices are important in shaping society, and public spaces are places for creative and free expression.”

The flag, “untitled (flag 2),” was designed by German artist Josephine Meckseper and is being displayed in several locations across the United States, including KU, Cornell University, Texas State University, Rutgers University, and the University of South Florida.

Meckseper’s design is the only one in the project that has involved altering the American flag.

“The flag is a collage of an American flag and one of my dripped paintings which resembles the contours of the United States,” Meckseper explained on the Creative Time website. “I divided the shape of the country in two for the flag design to reflect a deeply polarized country in which a president has openly bragged about harassing women and is withdrawing from the Kyoto protocol and UN Human Rights Council.”

“The black and white sock on my flag takes on a new symbolic meaning in light of the recent imprisonment of immigrant children at the border,” Meckseper added.

The project, which began in June 2017, called “Pledges of Allegiance” features 16 artists and focuses on one artist’s work each month. Each artist designed a flag to highlight “an issue the artist is passionate about, a cause they believe is worth fighting for, and speaks to how we might move forward collectively,” according to the project description.

“Conceived in response to the current political climate, Pledges of Allegiance aims to inspire a sense of community among cultural institutions and begin articulating the urgent response our political moment demands,” a nearby plaque states.

“As a born and raised Kansan and somebody that loves being apart of this university and loves being a Jayhawk, I find this to be the exact opposite of what it means to call yourself a Jayhawk,” Ian Ballinger, a communications major at KU, told Campus Reform.

“Unfortunately you see universities across the country being overrun by far left activists and postmodernists,” Ballinger added. “This display is not representative of what the University of Kansas, the school I grew up loving and still love to this day, stands for.”

“As a U.S. Navy veteran and student at the University of Kansas currently seeking my Master's degree, I find the ‘artwork’ that currently flies at Spooner Hall heinous and abhorrent,” Ian Appling told Campus Reform. “I do strongly believe in the United States' Constitution and swore an oath to defend it, which includes the individual citizen's right to use our flag in an expression of freedom of speech.”

“With that being said, this desecrated American flag is currently flying on a public University's campus, where Kansas and Federal taxpayer money is sent to provide an unbiased center of learning and discourse,” Appling pointed out. “Any public space or property that shows bias of this proportion should have all taxpayer funds indefinitely suspended until proper action is completed, formal apologies sent out, all faculty involved should be thoroughly investigated, and examples made.”

Campus Reform reached out to Creative Time, but was directed back to its original statement. Spokespersons for KU have not responded to inquiries from Campus Reform.