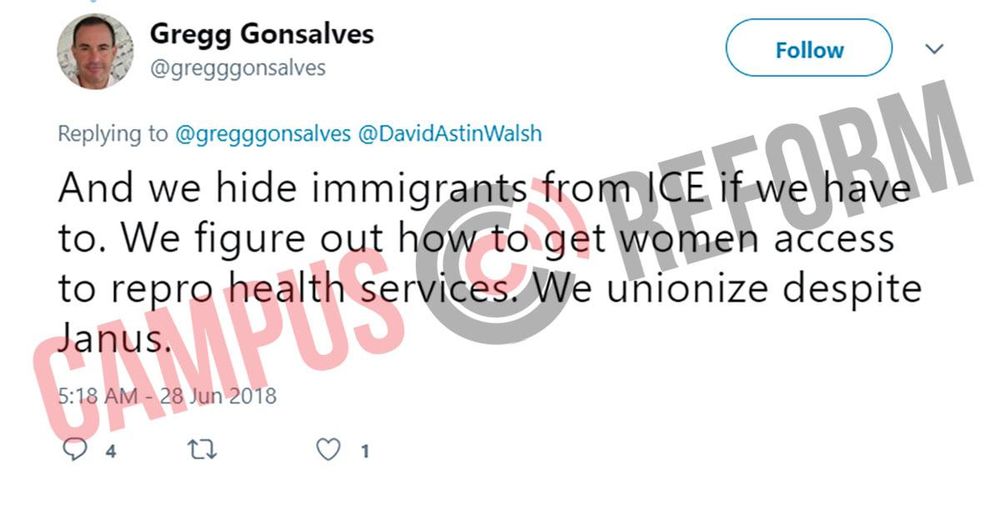 A Yale University law professor encouraged people to “hide” illegal immigrants from ICE, but says he has “no qualms” about revealing the home addresses of ICE employees.

“[ICE is] raiding restaurants, setting up roadblocks in New England, getting on buses to check for foreigners,” Gonsalves tweeted in late June. “We've unleashed something evil in the United States. Let the pundits debate who's winning the day as immigrants get rounded up. The rest of us have to fight.”

“[W]e hide immigrants from ICE if we have to,” Gonsalves wrote in a subsequent tweet, prompting Campus Reform Editor-in-Chief Lawrence Jones to ask whether he intended to suggest aiding and abetting criminals.

“Aiding and abetting is about facilitating crime,” he added, asserting that “here the moral crime is against immigrant children and families, women, and workers.”

In addition to his support of illegal immigrants, Gonsalves has also endorsed violating the privacy of ICE agents and immigration officials, calling for their addresses to be released to the public.

When one Twitter user asked if “anyone already made a map of all the detention centers, ICE offices, locations of companies supplying them,” Gonsalves suggested that the “home addresses of major ICE officials” should be released, as well.

“I’m such a bad person,” Gonsalves wrote. “I have no qualms about showing up at ICE regional directors’ homes. They can leave their jobs at the office and feel free from scrutiny at home. Lucky them.”

In follow-up tweet, Gonsalves clarified that releasing the information would be “a last resort” after another user warned that “this could cause collateral damage.”

The professor’s criticism of ICE was also evident in May, when he commented on an image of a warning sign depicting a person holding a young child above the open mouth of an alligator. In his tweet, Gonsalves wrote that the image can be used as a “new logo for ICE.”

More recently, Gonsalves blasted President Trump on Wednesday, calling the commander-in-chief a “sociopath” who is living in an “out of control, chaotic, and compromised” White House with his “accomplices.”

And in a June 16 tweet, he warned that Trump voters will ultimately “have to live with the guilt of their choices” after “seeing their neighbors dragged away” by ICE.

Campus Reform reached out to Yale University and Yale Law School for comment, but did not receive a reply from either in time for publication.

"U.S. Immigration and Customs Enforcement (ICE) fully respects the Constitutional rights of all people to peacefully express their opinions. That being said, ICE remains committed to performing its immigration enforcement mission consistent with federal law and agency policy. People can disagree on policy, but it is unconscionable to target our employees and advocate violence against federal law enforcement officers, who put their lives on the line every day to keep our communities safe."

UPDATE 2: Following the publication of this story, Gonsalves called on the Southern Poverty Law Center (SPLC) to add Campus Reform to its list list of "hate" groups.