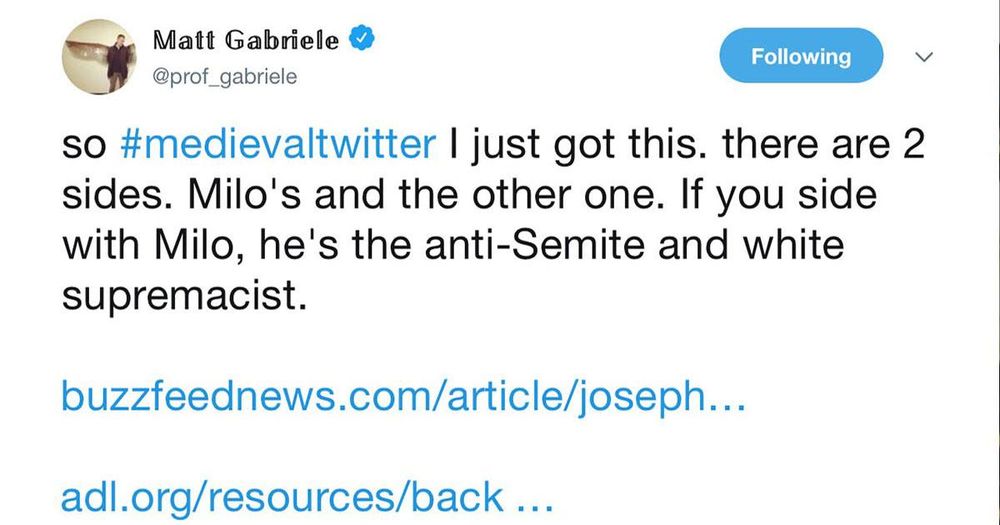 A professor of Medieval Studies says that anyone who questions the need for more social justice in the field is on the side of an “anti-Semite and white supremacist.”

In a tweet on July 22, Virginia Tech professor Matt Gabriele posted a screenshot of conservative provocateur Milo Yiannopoulos’ request for comment about the push for more social justice-oriented workshops at an annual Medieval Studies conference.

“[S]o #medievaltwitter I just got this,” the academic tweeted. “[T]here are 2 sides. Milo's and the other one. If you side with Milo, he's the anti-Semite and white supremacist.”

Gabriele, who also chairs the Department of Religion and Culture, supplemented the tweet with two links to articles about Yiannopoulos—a BuzzFeed story about how the commentator “smuggled white nationalism into the mainstream” and an article about Yiannopoulos that was published by the Anti-Defamation League.

The attack on Yiannopoulos came after the conservative pundit requested a comment from the professor about a “political war” within Medieval Studies instigated by a petition complaining that the International Congress on Medieval Studies had rejected several workshop proposals submitted by a group called "Medievalists of Color."

“I am writing a long magazine feature about the political war currently raging within Medieval Studies,” Yiannopoulos wrote. “Your name appears in the story.”

“Is this a good email at which to reach you with questions?” the email conitnued, according to a screenshot posted by Gabriele. “I would like to send you a list of claims the piece makes so you have the opportunity to respond to them. If you prefer, I can be reached by telephone.”

In addition to Gabriel's criticism of Yiannopoulos, he also recently retweeted a Major League Baseball clip of Brewers fans giving their pitcher, Josh Hader, a standing ovation, remarking that one could “watch whiteness work.”

Gabriele also retweeted his own remarks from June in which he told his followers that “Marc Bloch punched Nazis,” urging them to “be like Marc Bloch #medievaltwitter.”

In a statement to Campus Reform, Gabriele provided several links to articles about Yiannopoulos, including the two that were already mentioned in his public tweet.

In addition, he cited a USA Today report on the provocateur’s joke about “gunning journalists down,” a story detailing PayPal’s suspension of Yiannopoulos over the controversial remark, and a 2017 Forbes article on emails tracing “neo-nazi moves” of the pundit and his former boss, Steve Bannon.

The professor proceeded to post the screenshots of the inquiries from Campus Reform, tweeting that this outlet is “supporting MY [Milo Yiannopoulos] and defending white supremacy to own the libs.”

[RELATED: Prof: 'The modern GOP is nothing but white supremacy']

As previously reported by Campus Reform, the professor has blasted conservatives in the past, tweeting last year that “the modern GOP is nothing but white supremacy.”

“You would expect academics, of all people, to take a breath before diving into the hysteria that has gripped society in the era of Trump. But, if anything, they are even more subject to moral panic and groupthink than reporters," Yiannopoulos told Campus Reform. "All of their usual critical faculties appear to be suspended when they hear my name: they lose their rationality and they think a neutral request for comment constitutes a 'threat.'

"As for the name-calling, I am a Jew and an utterly unreconstructed Zionist. I am married to a black man from Jersey. There aren’t words for how deranged these allegations are," Yiannopoulos added. "But the progressive element will say literally anything to discredit their enemies. And these professors are absolutely bricking it about the feature I’m preparing to drop on them.”