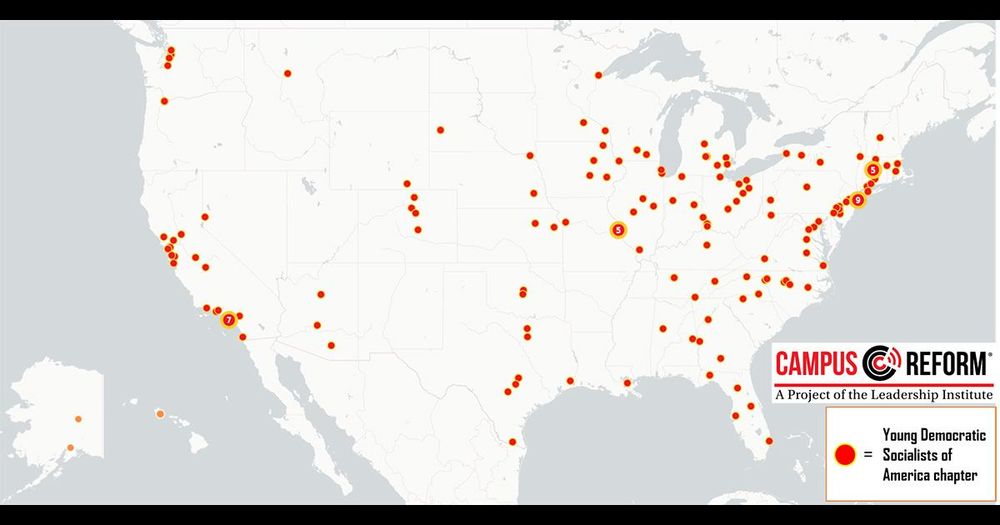 The Young Democratic Socialists of America organization now claims to have more than 250 chapters on campuses across the country, a dramatic increase from just 15 chapters in 2016.

YDSA is the student-focused branch of the Democratic Socialists of America (DSA) which is “a political and activist organization” that seeks to “empower working people” and has several ongoing campaigns, including Medicare for All, Strong Unions, and Electoral Power.

The YDSA mission is to “build the power of students, campus communities, and youth to fight for equality, justice, and democratic socialism,” according to its constitution, which was last updated in August 2017.

In June 2017, YDSA launched a “Fall Campus Drive” with the goal of registering 100 new chapters by the fall semester, noting that it had already expanded from just 15 chapters to 50 chapters in 27 states over the preceding year.

“When we originally launched the YDSA fall campus drive, we set the bold target of 100 campuses across the country,” the recognized chapter list states. “Currently, we've received over 250 campuses register for the fall drive! This explosion in interest shows that this semester will be the biggest ever for YDSA. We will be able to build a mass movement for democratic socialism and justice at campuses across the country.”

While YDSA states that more than 250 chapters are now registered, the list includes only 218 groups, 27 of which are high school chapters.

Democratic Socialist students will be convening in Minneapolis this August for YDSA’s 2018 Summer Convention, which will focus on “key decisions” for the academic year, electing new NCC members, and holding “skills trainings” where student attendees will be able to “learn from other young socialists in order to hit the ground running” during the school year.

Past summer conventions have included “Anti-Oppression Caucuses & Ally Groups” where students can share “experiences and strategies for combating oppression” and workshops on topics including “socialist feminism, history of the Labor Movement, Ecosocialism, Democratic Socialism, Social Media Strategies, and more.”

Membership in YDSA is open to any full- or part-time student (including high school students), campus workers, and “youth who accept the aims, constitution, resolutions, and the decisions of the organization,” though the organization’s constitution notes that nobody over 30 years of age may hold elective office in the organization.

Each chapter must have a minimum of three members to qualify for official recognition, and three or more chapters can combine to form a city-wide organization (if they have 15 or more members between them) or a State Council (if they have at least 25 members total).

Notably, the constitution also stipulates specific gender- and race-based leadership quotas for the National Coordinating Committee (NCC), which oversees YDSA between annual conferences, mandating that at least half of the committee’s members must be “self-identified women or gender non-binary people,” and that at least half must also be “people of color.”

If those quotas are not met for any reason, the NCC is required to recruit additional at-large members until it achieves the required degree of diversity.

DSA supplies the YDSA chapters with materials and initiatives to support the democratic socialist movement, including an “Organizing Manual” that contains detailed instructions on “How to Support a Union Organizing Drive or Strike on Your Campus” and “Weaving Democratic Socialism Into Your Work.”

“In the case of an organizing drive or a strike, community pressure on the university is an important element in the campaign,” the handbook states. “Call to the university’s avowed commitment to freedom of debate if the administrators refuse to allow union organizers or activists equal time to compensate for anti-union activists. You may also want to flood the campus newspapers with letters to the editor in support of the union.”

The manual gives individual chapters relatively wide latitude to select their own campaigns, noting that “there are plenty of struggles that YDSA supports, such as defending affirmative action, increasing access to reproductive and sexual healthcare, including abortion, for all, ending U.S. imperialist conquest abroad, shifting away from our reliance on dirty and unhealthy energy sources, and ending environmental racism, and redirecting our collective tax dollars to benefit all of us through quality public services.”

Students at campuses with active YDSA chapters, though, say the organization is better at disrupting conservative speech than advancing its own policy agenda.

“Members of YDS at [George Washington University] are not interested in genuine activism or attempting to talk to others who disagree with them,” asserted Campus Reform Correspondent Abigail Marone. “Instead, they're content with causing a scene without a clear message.”

“I think the group’s inability to have a cohesive message on my campus is a great representation of the democratic socialist movement’s inability to have a clear, cohesive message,” Marone added. “Candidates like Ocasio-Cortez want to get involved in as much left-wing activity as possible without even having a clear message of what they stand for or an understanding of basic policy.”

“At the University of Florida, socialism has been growing at a staggering rate,” Weldon said. “Recently, I spoke with an elected official who will not use the word ‘capitalism’ on campus since it has become such a dirty word. In my three years on campus, groups like Young Democratic Socialists of America have ballooned in size and scope.”

“I’ve witnessed them tear down signs for conservative events I’ve hosted, attempt to shut down a Dinesh D’Souza Speech which required a police presence, and even assault a conservative student,” Weldon added. “At Florida, YDSA has pushed for the abolition of ICE, government controlled healthcare, and making UF a sanctuary campus.”

Campus Reform reached out to YDSA for comment, but has not received a response.