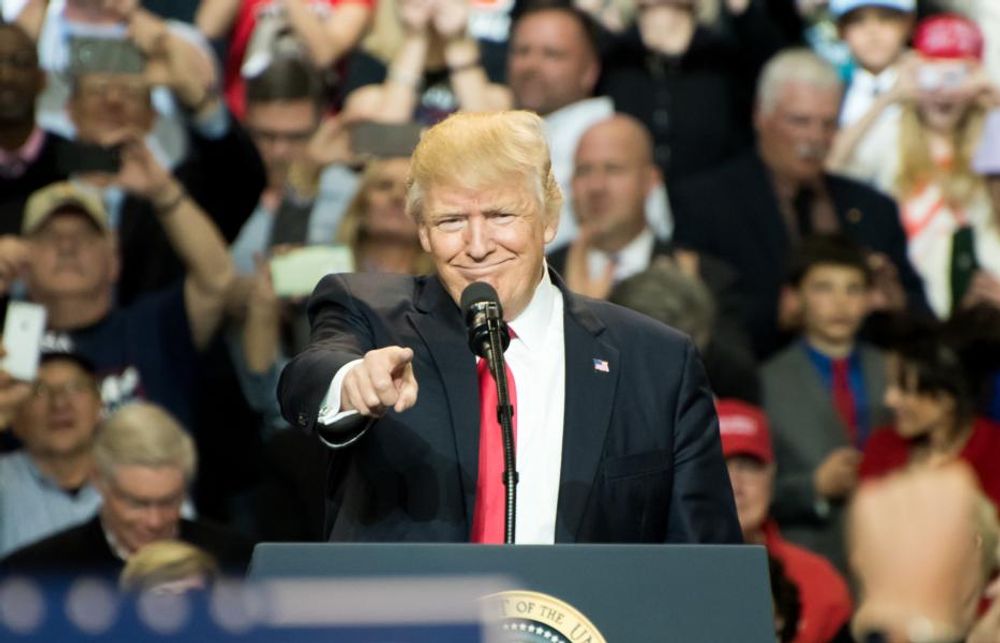 President Donald Trump visited Eastern Kentucky University on Saturday to campaign for Rep. Andy Barr (R-Ky.). But even though thousands turned out to see the commander-in-chief, some faculty members and students tried to stop him.

Students and faculty members at Eastern Kentucky University participated in unity marches, petitioned university officials, and a group of faculty members wrote an open letter expressing their grievances to the board of regents and EKU President Michael Benson.

EKU students protesting today at the unity walk ahead of Donald Trump’s rally this weekend pic.twitter.com/CbDSLxzS3X

In the "Open Letter to University President Benson and the Board of Regents," dated Oct. 10, more than 120 faculty members at EKU address their “profound opposition to the Donald J. Trump for President Campaign” organizing a rally on campus.

"Our opposition to the campaign does not arise from any differences of opinion with the political content that is likely to be put forth at the rally: as a group, we among the faculty subscribe to a diverse set of political beliefs which mirror those of the student body and the Commonwealth as a whole, and we are fully committed to encouraging the expression of that diversity of beliefs. Yet we must object to this campaign which has consistently, openly, and unambiguously attacked the values of inquiry, learning, and free speech which lie at the heart of higher education and form the core mission of this University," the letter states.

Further reasoning behind the faculty members' disapproval of the rally occurring included the “threatening rhetoric of the Donald J. Trump for President Campaign," which they say “has been so virulent that in the few days since this rally was announced, many faculty members have reported hearing from students who are concerned for their physical safety.”

In addition to the letter from faculty, a Change.org petition called on Benson to “release a statement condemning the messages that will be promoted on EKU’s campus on Saturday and emphasizing that action will be taken against students for harassment.”

At the time of publication of this article, the petition had more than 80 signatures.

In an October 5 statement from EKU, the university stated, "we understand this election season has been filled with a number of passionately debated issues, and we encourage our community to remain civil and respectful of differing political opinions in the discourse surrounding the rally."

“Free speech is a key part of the learning experience at EKU...We encourage our University community to be informed and engaged in the political process," the university said. "However, we understand this election season has been filled with a number of passionately debated issues, and we encourage our community to remain civil and respectful of differing political opinions in the discourse surrounding the rally."

“We do indeed stand with the professors as do many other students," Carson Stanifer, president of the College Democrats at EKU, told Campus Reform.  "I will personally not be attending the event because I have other political commitments that day."

“I think the fact that these professors and students feel entitled enough to try and shut down the President's speech at a public university just goes to show that they don't understand the first amendment,” Joshua Speer," an EKU sophomore, told Campus Reform.

“I think the campus communists need to get over themselves and find something real to be upset about,” Speer responded when asked about the planned student protests.

“Although you often hear of liberal protests against conservative speakers, there is a much larger silent majority that is either conservative themselves or at least support[s] freedom of speech of both sides of the political spectrum,” Cody Dye, an EKU senior, told Campus Reform.

When asked about the protests planned while President Trump is on campus, Dye said, “If u [sic] ain’t got haters you ain’t poppin [sic].”

“As a proud EKU alumnus, I sincerely hope the Trump campaign rally scheduled for this weekend is able to occur uninhibited. If for whatever reason it is not, I believe it would (1) signify an irreverence for a core American freedom and (2) be a missed opportunity for my friends in Kentucky, both Republican and Democrat, to show the country how to respectfully exchange ideas,” Tyler Swafford, an alumni of EKU and now Georgetown Law student, told Campus Reform.

Kristi Middleton, an EKU spokeswoman told Campus Reform regarding the presidential rally: “EKU’s President has been in communication with the faculty senate and responded to various drafts/versions of their open letter. There is no additional comment at this time."

Middleton also referred Campus Reform back to the University’s prior statements, in which it says that EKU "remains non-partisan with respect to any endorsement of a political candidate."

Campus Reform reached out to the Trump Campaign, the Barr campaign but did not hear back in time for publication.