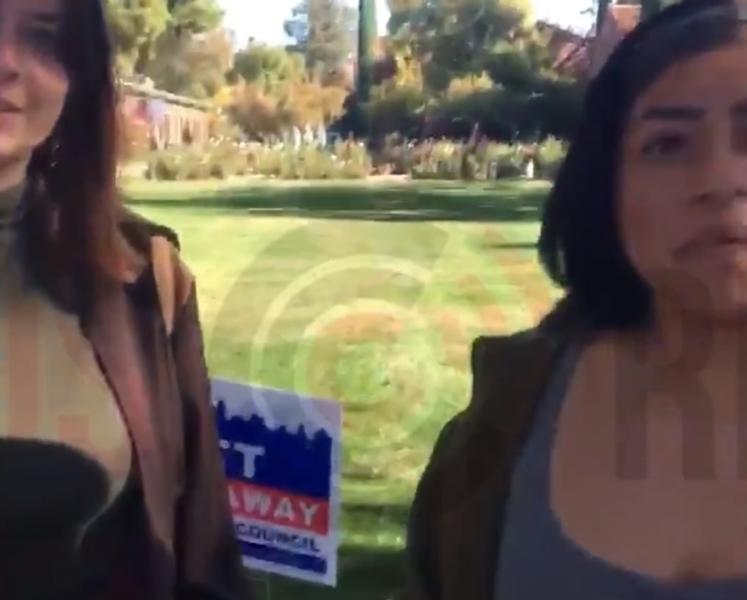 The contents of the signs were not clearly visible in the video, Curry told Campus Reform on Monday that the signs stated that three liberal city council candidates "want to raise gas prices” and “ignore [the] homeless problem.”

"We're taking them out because they're inaccurate," one responded. Both claimed that taking the signs constituted free speech.

"Excuse me, what are you guys doing with our signs?" CSU Chico student and College Republicans Executive Director Michael Curry asked the two women carrying the signs.

"We're taking them out because they're inaccurate," one responded. Both women claimed that taking the signs constituted free speech.

"You're not allowed to destroy signs, it's free speech," Curry said, taking the signs back.

The women replied that they were not destroying them, but simply "moving them" or "taking them away."

Curry told the women that he was going to report them to the police and asked for their names, but they did not provide them.

The woman, who suggested she took classes and worked at CSU Chico, unsuccessfully tried to grab Curry's phone.

"I have a right not to be filmed," she insisted.

"You don't," the College Republican responded. "You're on public property."

Curry sent Campus Reform a police report he plans to file pertaining to the woman who tried to grab his phone.

"She knew what she did was wrong and covered up a button she wore for a candidate to try to hide the link," he said in the report. "She then went to UPD and lied about the altercation, saying she "gently placed the sign on the ground" to make herself seem innocent. She didn't mention trying to take my phone."

Campus Reform reached out to CSU Chico, as well as the school police, but received no comment in time for publication.