Campus Reform | ROUNDUP: The free speech stories this week you may have missed

ROUNDUP: The free speech stories this week you may have missed 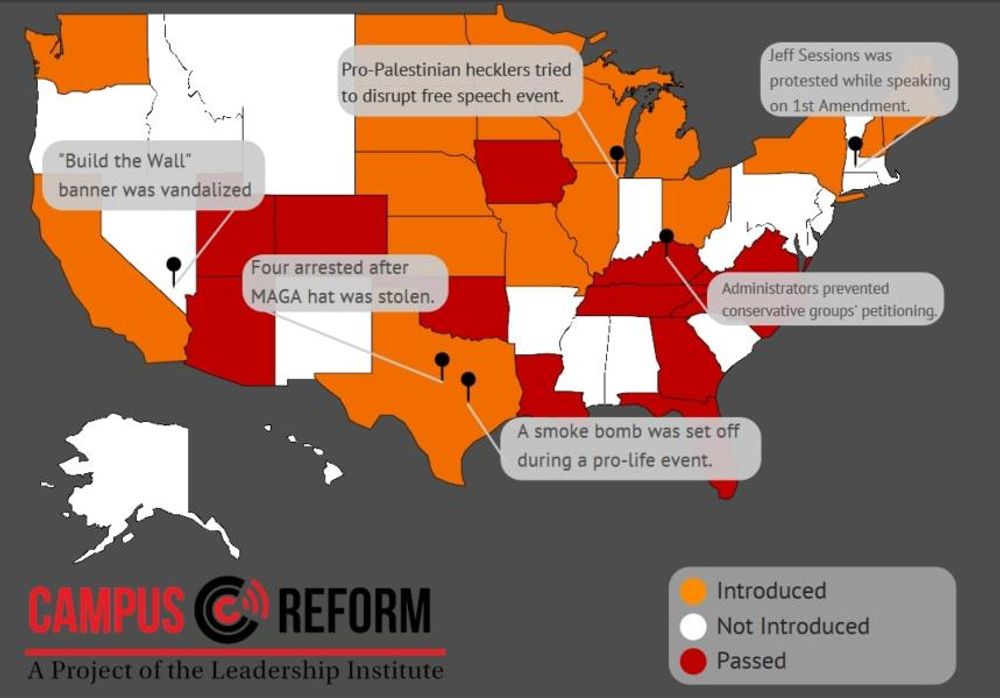 It was quite a week when it comes to free speech on college campuses. Campus Reform covered six incidents in five states where conservative individuals or groups faced censorship or disruption while exercising their First Amendment rights to free speech.

Here's a map and brief roundup of the stories you may have missed:

1. The University of Texas-Austin

As pro-life speaker Ryan Bomberger gave a presentation, titled, "Should have been aborted," a smoke bomb was set off, disrupting the event. The building was evacuated and the group went to a lecture hall to finish their event.

While speaking about the state of free speech on college campuses, former Attorney General Jeff Sessions' speech was disrupted when a stink bomb went off. Following the stink bomb going off, students staged a walkout, footage of which was posted on Twitter.

A faculty council at DePaul University passed a resolution condemning pro-Israel professor Jason Hill after an op-ed he published in The Federalist. Pro-Palestinian student groups at the university also called on the school to censure Hill for his pro-Israel views.

4. The University of Nevada-Las Vegas

A conservative student group at UNLV had its "Build the Wall" display vandalized.  Following the incident, the Residence Hall Association and student government president-elect sent a message to students condemning the display, but not the actual vandalism.

Four Texas State students were arrested on "various charges" after an incident in which one of those students grabbed the "Make America Great Again" hat off a student's head, threw the hat to the ground, and kicked it. Campus Reform obtained footage of part of the incident.

Conservative students say they were told by two administrators after a few minutes to stop tabling and go somewhere else while a democratic socialist student group tabled for over an hour in the same spot the day before. Campus Reform obtained audio of the conversations