The students were confronted and then escorted out of the building, all while livestreaming the protest.

Members of the UMass student government participated in a “Fund our Future” rally at the Massachusetts state capitol during a Gold Star family ceremony. 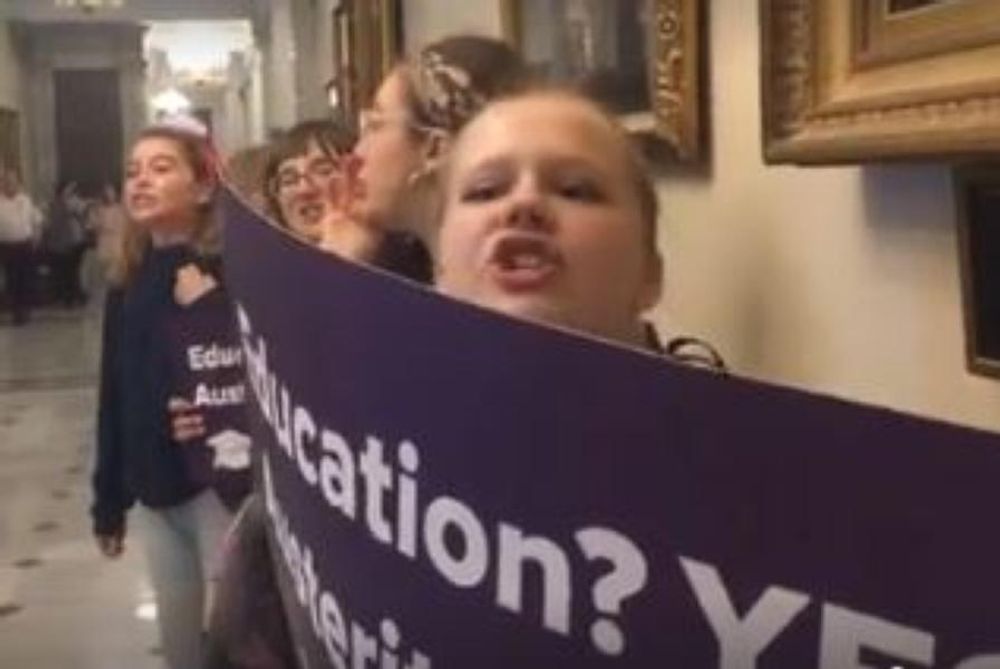 A student-led protest at the Massachusetts State House Wednesday disrupted a Gold Star family ceremony taking place downstairs, drawing the ire of the family all while the protest live streamed on Facebook.

Students from the Public Higher Education Network of Massachusetts (PHENOM), participated in a five-day “occupation” of the Massachusetts State House, organized by Fund our Future and seven other groups, to protest budget cuts and funding shortfalls and also advocate for the “Debt Free Future Act,” which calls for “debt-free public higher education” in the state.

The fifth day of the protest, which was conducted by the Center for Education Policy and Advocacy and UMass Amherst’s student government, was live-streamed on Facebook with the protesters chanting things such as “No cuts! No fees! Education should be Free!” and “Fund UMass!”

Various chants continued at the sit-in Wednesday until the Star-Spangled Banner began to play and someone tells the protesters that there is a Gold Star Family reception occurring.

However, shortly after the Star-Spangled banner is finished, the protesters began to chant again. After a few minutes of chanting, around 11:50 in the video, a man identified as Joseph Pollini by the Boston Herald, who was attending the Gold Star reception honoring his brother Matt, begins to confront the protesters.

“I am a Gold Star Family member and you guys are disrespecting us!” Pollini said. “We’re just asking you to remain quiet, while the celebration is going on!”

One of the activists says that they would leave their legislators “to reckon with the consequences of their mistakes.” Shortly thereafter, the students are escorted out of the building before the live stream ends.

“We had no prior knowledge of the event honoring Gold Star Families,” Zac Bears, executive director for PHENOM, told Campus Reform. “And when we were told of the disruption, we altered our plans and moved the crowd away from the event as soon as possible given the tense situation.”

Bears also told Campus Reform that he had reached out to several state representatives to apologize for the incident. He has also stated that he will speak with Major General Gary Keefe to apologize and has offered to personally apologize to the Gold Star family member. The PHENOM executive director added that as students were leaving, one attendee in uniform spoke to the students and hugged one of them.

“At least one student involved in the protest comes from a military family, and we had no intention to disrupt their event in any way,” Bears said.

PHENOM tweets cited students claiming that they were threatened with arrest as they protested outside of Speaker Bob DeLeo’s office and cited Bears referencing a “facial recognition system” at the State House that he claimed a court officer told him would flag individuals.

DeLeo, on Thursday, responded to the claims on Twitter.

“There was no threat of arrest,” DeLeo said on Twitter. “These Trumpian tactics are both offensive and counterproductive.”

Campus Reform reached out to the Student Government of UMass for comment on the situation but it did not respond in time for publication.