Drag queen PROF ‘brings the nightclub to the classroom’

An advertisement for an appearance at Hamilton College claims that several university departments are sponsoring the event.

A Tufts University professor is touring the country as a drag queen alter-ego in order to teach students about “queer nightlife.” 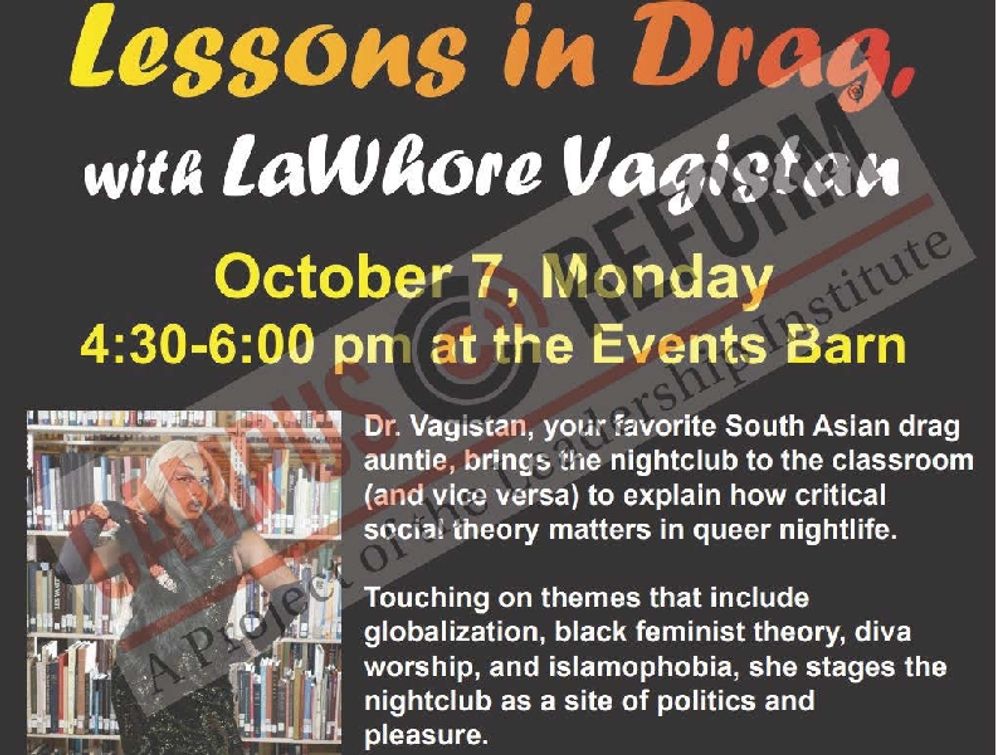 A professor is lecturing in drag at various universities in order to teach students about "queer nightlife" and to bring "the nightclub to the classroom," with one event occurring Thursday night.

Next Monday, students at Hamilton College in New York are invited to meet “LaWhore Vagistan” at a college-sponsored event called “Lessons in Drag” where they will learn “how critical social theory matters in queer nightlife.”

“Dr. Vagistan, your favorite South Asian drag auntie, brings the nightclub to the classroom (and vice versa),” reads a flyer advertising the event, which notes that the evening is being sponsored by the Hamilton anthropology department, dean of faculty, and Asian studies program.

The flyer, obtained by Campus Reform, was sent to Hamilton College contacts by anthropology professor Mariam Durrani, inviting students and alumni alike to a “show” that is set to be “part lecture, part lipsync, part audience participation” on the topics of Islamophobia, blackis the feminist theory, diva worship, and globalization, and is meant to demonstrate “how much drag teaches us, even requires us, to be in relation with the rest of the world.”

Among the photographs on LaWhore Vagistan’s Instagram profile are images of Khubchandani lecturing in full drag, captioned with tags such as #lessonsindrag and #professorlife. One such image shows Khubchandani in front of an image of the female reproductive system superimposed over a map of Southern Asia.

Khubchandani’s employer says that the professor teaches “at the intersection of performance studies and queer studies.”

Khubchandani’s university bio boasts that in addition to the professor's many academic contributions like books about “Accenting Gay Indian Nightlife” and co-curating a roundtable series called “Feminisms Unbound,” Khubchandani “is also a performance artist,” whose art extends beyond drag to include “storytelling, body art, theater, and digital media.”

Vagistan is slated to make several similar appearances at universities across the nation, including at the University at Buffalo and the University of Southern California.

Campus Reform reached out to Khubchandani and Hamilton College for comment but did not receive a response in time for publication.