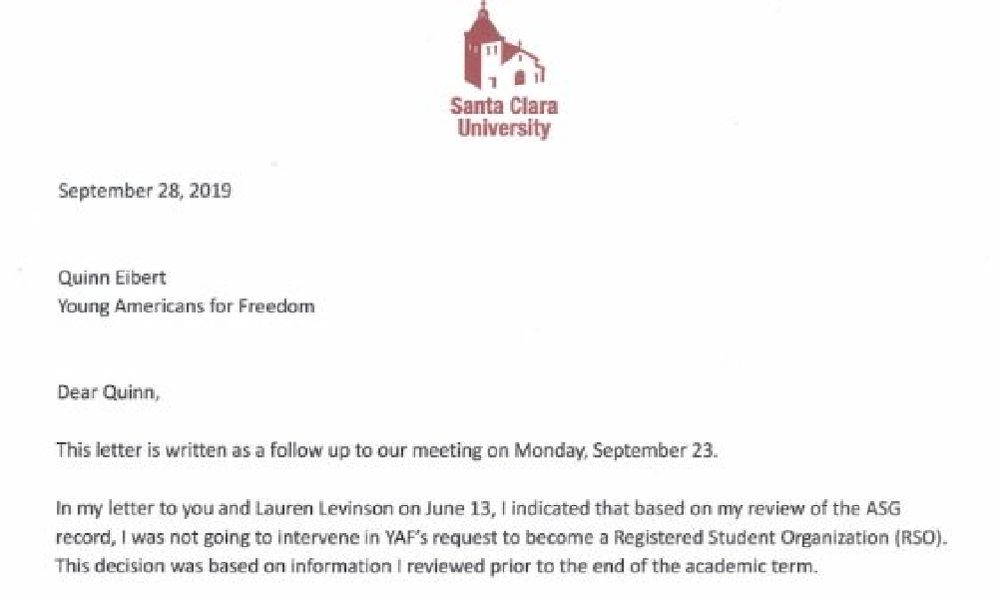 In a letter dated September 28, SCU Vice Provost for Student Life Jeanne Rosenberger wrote to the chapter's chairman, Quinn Eibert that she would intervene and grant Young Americans for Freedom official RSO status:  “Over the course of the summer, I reviewed all of the materials again, as well as my notes from meetings with student leaders at the end of the term/ Although there were several reasons given for why some ASG senators voted against recognizing YAF, my further review led me to a different conclusion than was communicated in June.”

YAF posted a copy of the letter on its website.

This marks the second time in less than three years that SCU administrators have intervened following the student government refusing to recognize conservative groups. In March 2017, the vice provost intervened to approve the Santa Clara Turning Point USA chapter.

In a comment to Campus Reform, Eibert said the vice provost's decision “makes it clear that they [ASG] shouldn’t be making decisions. They are incompetent, intolerant and dishonest. Their statements are banal. Their virtue signaling is without reprieve.”

[RELATED: Student gov: Conservative group 'has the potential to cause harm']

Former at-large Senator for Jesuit Values Jim O'Brien, who had voted in favor of YAF, said that “given this is the second time this has happened during my first three years of college, I think it is fair to say ASG needs to re-evaluate how they go about this process."

"It is a pity that 99 percent of the time the senate performs thankless tasks dutifully and the other 1 percent they are chastised for a controversial decision, but that's the way the world works. The student body deserves to have confidence in the ability of their senate to objectively evaluate and approve RSO's and two repeals in three years is an inauspicious trend," O'Brien said.