Calling for an “inclusive and respectful campus,” Stanley compared the presence of U.S. Customs and Border Protection to vandalism of the campus Hillel.

Michigan State President Samuel Stanley sent a letter to the student body to address incidents that have caused the community “concern and anger." 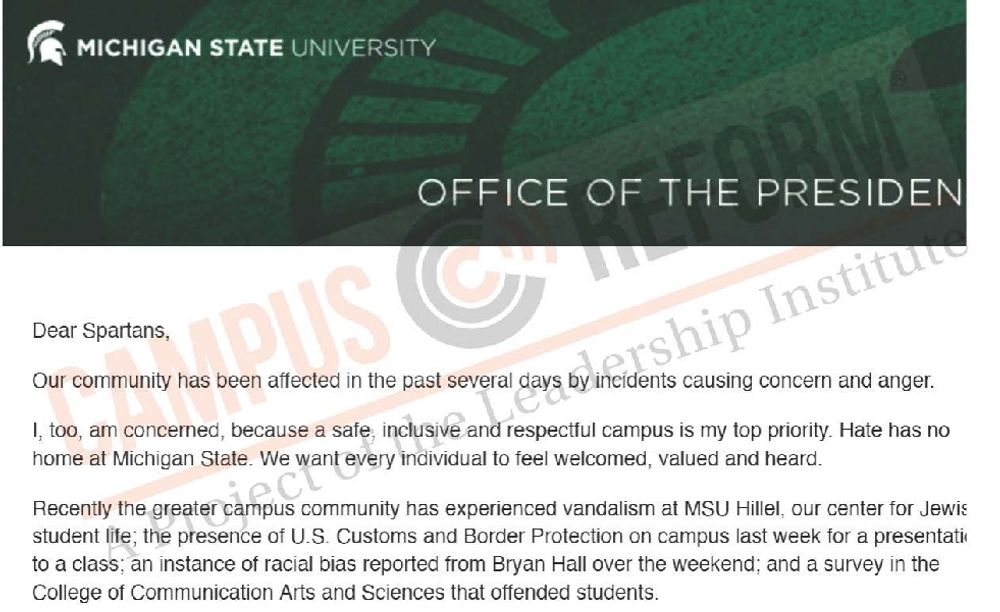 Michigan State University (MSU) President Samuel Stanley sent an email to students to address incidents that have caused “concern and anger” and have “disrupted a sense of safety” on campus.

Among these, according to Stanley, was U.S. Customs and Border Protection’s (CBP) presence on campus. This comes after the MSU student government passed a resolution calling Immigration and Customs Enforcement (ICE) “detrimental” to student safety and “disruptive” to student health.

CBP had previously sent three agents to MSU to give a presentation to a class titled “Customs, Compliance, and Security.” Some students had claimed that ICE was on campus.

Stanley listed CBP's presence as one of four incidents of “hate” that had taken place in recent days, along with vandalism that occurred at the MSU Hillel, a survey in the communications school, and an incident of “racial bias” in a campus dormitory.

The racial bias incident Stanely referenced involved toilet paper being hung on a dormitory door. Residents of that dorm claimed the toilet paper resembled a noose and believed they were targeted as the only black students in the hall.

MSU Residential and Hospitality Services and the campus police investigated the incident. Two students admitted to hanging the toilet paper as part of a Halloween prank, and denied any racial bias or resemblance to a noose.

At the time of Stanley’s email, several MSU officials had already referred to the incident as a prank.

Campus Reform reached out to MSU and to Stanley’s office to ask why he mentioned the presence of CBP among the other incidents, and why the toilet paper prank was described as “racial bias” after other MSU officials dismissed the incident as a prank.

No response was received in time for publication.

In a statement shared with Campus Reform, MSU College Republicans denounced Stanley for suggesting CBP’s campus presence was an act of hate.

“We are disappointed in the President’s decision to highlight a legitimate, educational visit by dedicated CBP agents in his statement against hate and bias,” the statement read. “Spartan students deserve a safe and inclusive campus. We ought to extend that inclusivity to hard-working law enforcement officers, especially to those invited for a class function.”

MSU Hillel told Campus Reform that the organization felt no comparison was made between the vandalism and the presence of CBP. Rather, it asserted Stanley was stating “what happened.”

“MSU Hillel does not believe that the President is equating what we experienced with any of the other three incidents,” Director of Jewish Student Life at MSU Hillel Nate Strauss said. “Additionally we would not want him to [do so] because they are not the same thing.”

The group also added that with the current information available, it does not believe the vandalism against Hillel was an act of anti-Semitism.