UMaryland warns 'cultural appropriation' costumes have 'no place' on campus

The university provided students with extensive resources about the concept of cultural appropriation as it pertains to Halloween, warning that costumes deemed insensitive can cause "anxiety" for certain individuals.

The University of Maryland has taken a strong stance against costumes deemed to be guilty of "cultural appropriation," warning students that costumes referencing other cultures have "no place in an inclusive community." 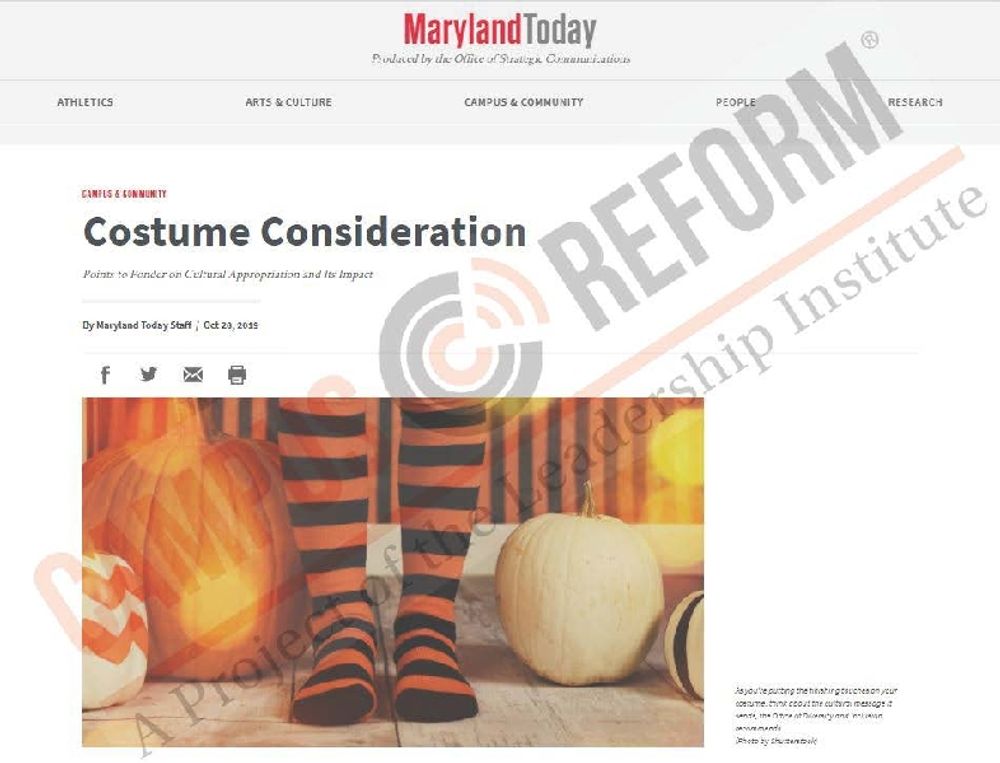 Students at the University of Maryland have been warned to steer clear of costumes that use an "aspect of another culture," with the school insisting that such costumes have "no place in an inclusive community" and can cause "heightened anxiety and tension" for "minoritized communities."

The University of Maryland is warning students to avoid committing "cultural appropriation" with their costumes by asking themselves questions like "Did people from the other culture represented by the costume endure negative experiences that people from your culture have not?" "What are the consequences of generalizing people based on their culture?" and "Who should determine the level of harm someone might experience from cultural appropriation?" according to a pre-Halloween news release.

"If you’re covering yourself in green balloons to imitate a cluster of grapes or dressing up in honor of your favorite dog, you’re golden (if not a golden retriever),” the University of Maryland says. “On the other hand, a costume that relies on an American Indian headdress or a samurai sword is using an important—and sometimes sacred—aspect of another culture and distorting it into an amusing party favor.”

“Although such mocking has long been common at Halloween, it has no place in an inclusive community."

The school points students to an expansive "tip sheet" on "Understanding Cultural Appropriation & Halloween," hosted by the University of Maryland Office of Diversity and Inclusion.

The document explains that even though “the ways people engage in appropriation may result in different degrees of impact,” the worst cases involve “historically dominant groups” using cultural elements “from those who are members of historically marginalized communities,” adding that “the differences in social and institutional power result in reinforcement of already-existing inequality."

The resource goes on to insist that "whether racial harm is intentional or not, the result is the same," adding that individuals can "conjure up histories of racial stereotyping, humiliation, and violence against marginalized groups” “under the guise of supposed edginess or humor."

“Minoritized communities experience heightened anxiety and tension as they also encounter these stereotypes in the media, classrooms, and social settings," the document warns.

The University of Maryland defines "cultural appropriation" as “when cultural imagery and materials (ex: ways of dress, music) are removed from their cultural context and used in ways they were never intended,” giving the examples of "dressing up as a person with a disability that you do not have, or wearing a sombrero as part of a 'Mexican' costume.

The guide links to several other resources, including an article from Oprah Magazine about the dangers of appropriating "queer culture" and another from Everyday Feminism, which attempts to dispute the notion that cultural appropriation is a "free speech" issue by comparing the claiming of a "right" to "take freely from disempowered groups" to the concept of the “white man’s burden."

Campus Reform reached out to the university for further comment, but did not receive a response in time for publication.