The student government at the University of Illinois at Urbana-Champaign posted a guide on its Facebook page describing various “racial micro-aggressions.”

The post claims that these are often influenced by “power dynamics” in the classroom. 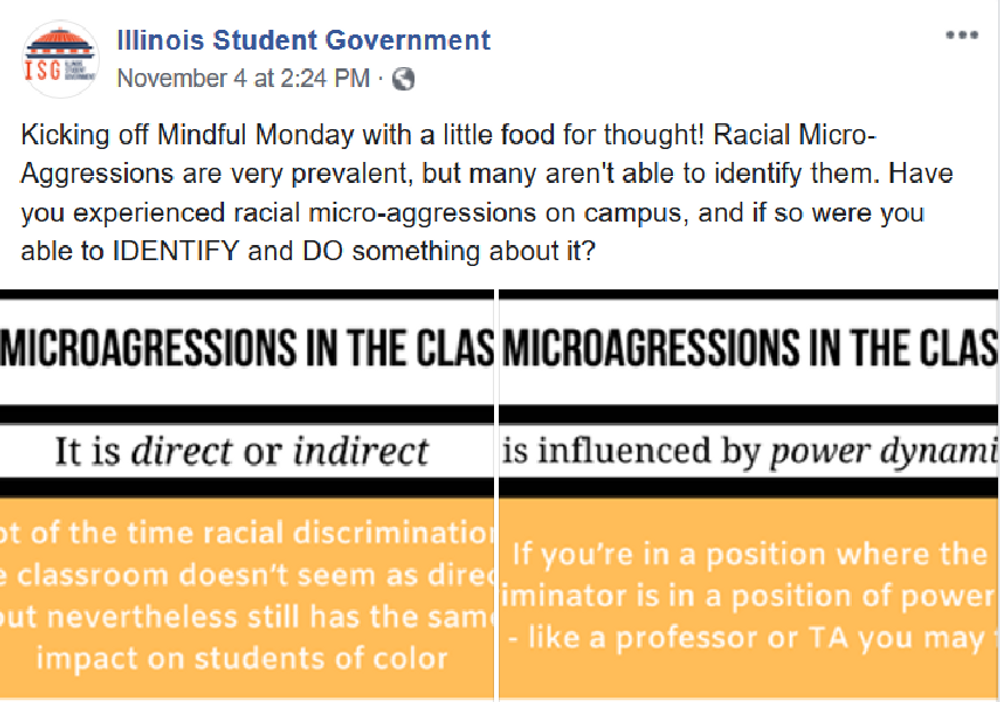 The University of Illinois at Urbana-Champaign student government recently posted a guide on how to spot “racial microaggressions,” which it claims are a “very prevalent” problem in classrooms.

“Racial Micro-Aggressions are very prevalent, but many aren't able to identify them,”  the student government stated in a Facebook post. “Have you experienced racial micro-aggressions on campus, and if so were you able to IDENTIFY and DO something about it?”

The group’s post explains that “a lot of the time racial discrimination in the classroom doesn’t seem as direct but nevertheless still has the same impact on students of color.”

The “racial microaggressions” highlighted in the post include asking classmates “where they’re really from,” uttering “seemingly passive comments” that are “influenced by racial stereotyping,” and “instructors purposely mispronouncing a student’s ethnic name despite being corrected multiple times.”

The same post suggests “racial microaggressions” are influenced by power dynamics, offering ways to identify if one is being discriminated against by somebody who is “in a position of power.”

The student government warns that such situations could lead to students being “afraid” to speak up because of potential grading backlash, feelings of being “powerless,” or being “discouraged to continue” the course.