One math professor is speaking out against the practice, claiming that it is effectively a political ideology test.

Many institutes of higher education require that candidates for faculty positions include “diversity statements” in their applications. 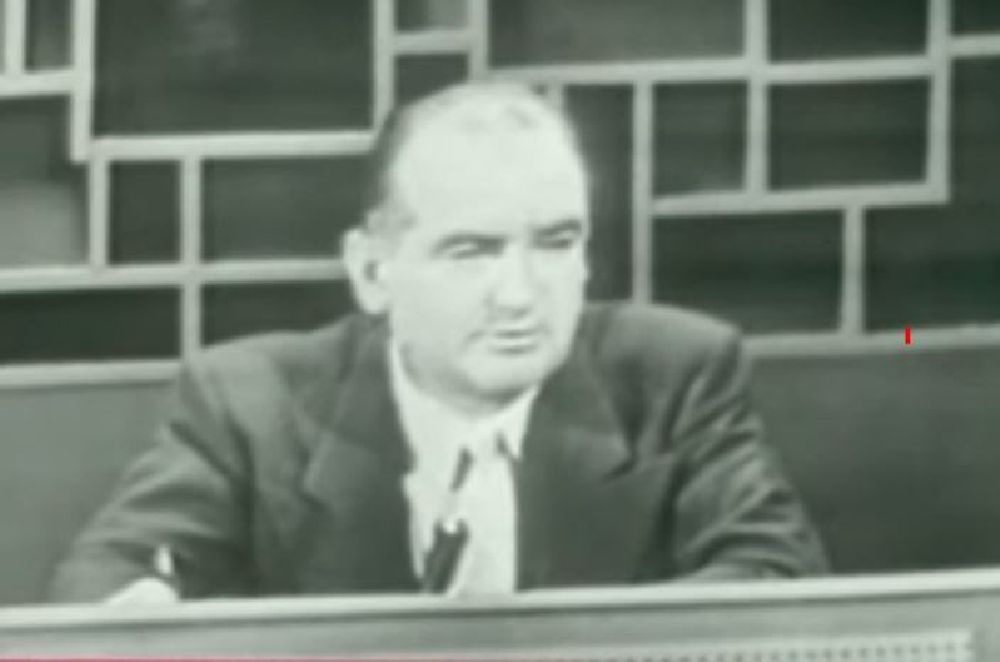 One math professor is speaking out against the perceived growing trend of filtering out ideological diversity in professors through application processes, pointing out one practice that she says effectively includes a political ideology test on job applications.

Thomspon begins by noting that she is in favor of making efforts to include everybody in the field of mathematics and listing several ways to do so, but ultimately rejects the common practice of requiring “diversity statements” in faculty applications. These statements are often included in applications for educator positions and are meant to gauge one's commitment to certain ideological values.

“We should continue to do all we can to reduce barriers to participation in this most beautiful of fields,” wrote Thompson, adding that “There are reasonable means to further this goal,” like “encouraging students from all backgrounds to enter the mathematics pipeline, trying to ensure that talented mathematicians don’t leave the profession, creating family-friendly policies, and supporting junior faculty at the beginning of their careers, for example.”

But she argues that “there are also mistakes to avoid,” even going so far as to compare the practice of filtering out applicants not focused on “diversity” to McCarthyism, saying “Mandating diversity statements for job candidates is one such mistake, reminiscent of events of seventy years ago.”

Thompson argues that diversity statements serve the purpose of filtering out candidates who do not ascribe to thinking about individuals in terms of groups.  She warns that “hiring committees are being urged to start the review process by using officially provided rubrics to score the required diversity statements and to eliminate applicants who don’t achieve a scoring cut off.”

Thompson presents a “typical” rubric used by the University of California Berkeley to score these types of statements which shows that “mentoring, treating all students the same regardless of background” puts one in the bottom tier of scores.

Thompson points specifically to “classical liberals” to offer an example of how this political test would affect people who do not share the same worldview as campus leftists. “Classical liberals aspire to treat every person as a unique individual, not as a representative of their gender or ethnic group,” explains Thompson.

“The sample rubric dictates that in order to get a high diversity score, a candidate should demonstrate ‘clear knowledge of, experience with, and interest in dimensions of diversity that result from different identities.’” By pointing out how classical liberals, despite treating all groups with respect would fail the diversity test, she comes to the conclusion that “requiring candidates to believe that people should be treated differently according to their identity is indeed a political test.”

[RELATED: Better promote 'diversity,' 'inclusion' if you want tenure at this Ohio college]

She closes out her article by explaining the value of not succumbing to political pressure and insisting that math should be open and welcoming to everyone, including those with unpopular viewpoints.

The rubric cited by Thompson mentions that in order to be at the top tier for the section on “Track Record in Advancing Diversity, Equity, and Inclusion” one needs to have “Organized or spoken at workshops or other events aimed at increasing others’ understanding of diversity, equity, and inclusion as one aspect of their track record.”

Another section requires “Clear knowledge of, experience with, and interest in dimensions of diversity that result from different identities, such as ethnic, socioeconomic, racial, gender, sexual orientation, disability, and cultural experiences” and that the candidate be “aware of demographic data related to diversity in higher education” and comfortable “discussing diversity-related issues” at work.

Thompson didn’t get away with her statements without any backlash from her academic peers.

Williams College math professor Chad Topaz derided her publicly in a Facebook post her by claiming that the "enlightened side" disagrees with Thompson and that there is no room for disagreement.

“I don’t know why Abigail Thompson would think this stuff, nor why the American Mathematical Society would publish it,” wrote Topaz, adding “There is no room in today’s world for false equivalencies and both-sides-ism.” He encouraged other academics to boycott the publication for publishing Thompson’s thoughts, to publicly shame Thompson on social media, to shame UC Davis for allowing her to be their department chair, and finally to avoid UC Davis as a grad school or a potential employer for his students. 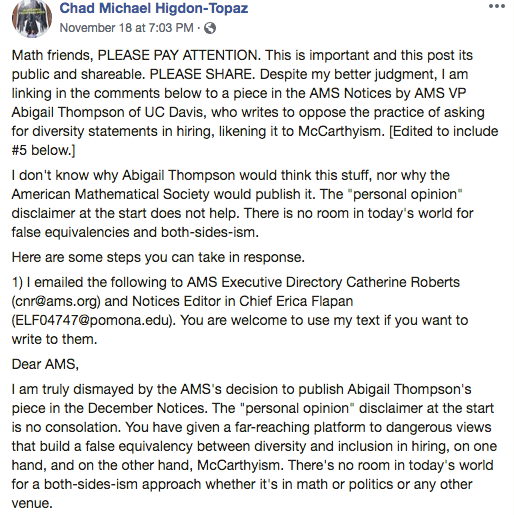 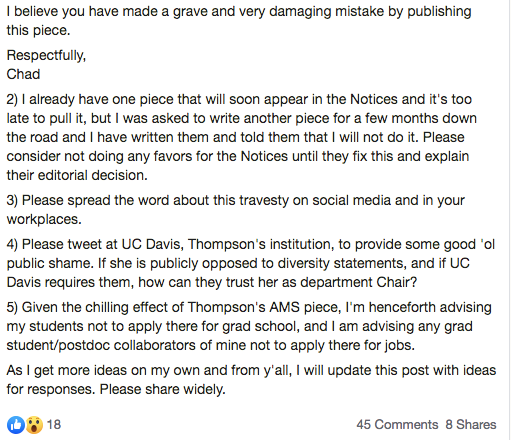 However, not all academic responses to Thompson’s statement were negative.  Portland State University political science professor Bruce Gilley agreed with Thompson, calling her a “bold and courageous woman daring to call out the political litmus tests of ‘diversity statements’ or ‘diversity achievements’ for what they are: a clear and present danger to academic excellence, social freedom and indeed diversity goals themselves.” 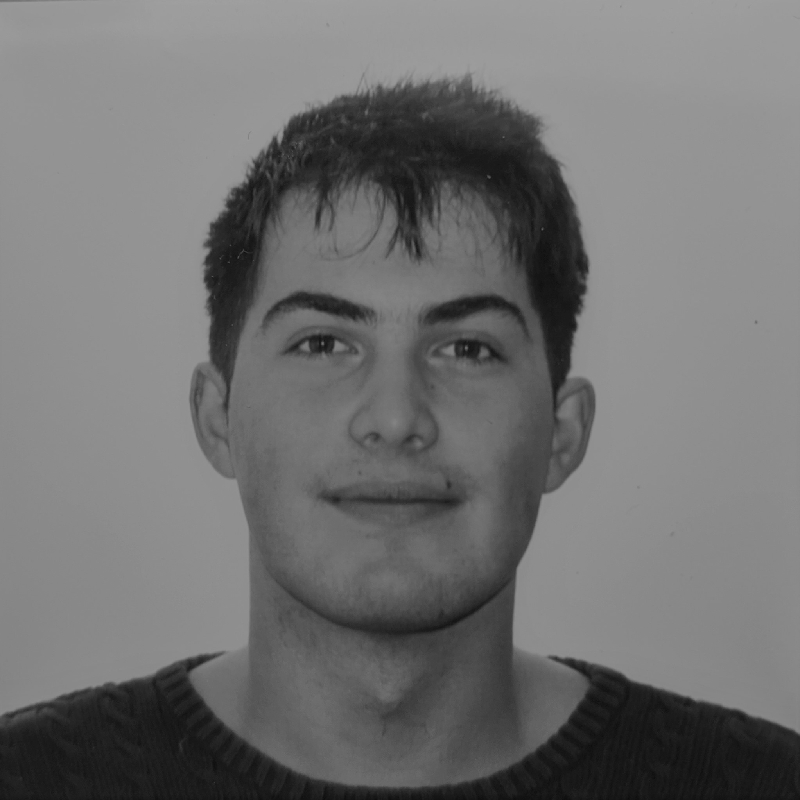