The group urged students in a campus dining hall to not “swipe” their meal card as part of the strike.

Graduate students at UCSC are demanding a pay increase of $1,400 to account for high rent in the area. 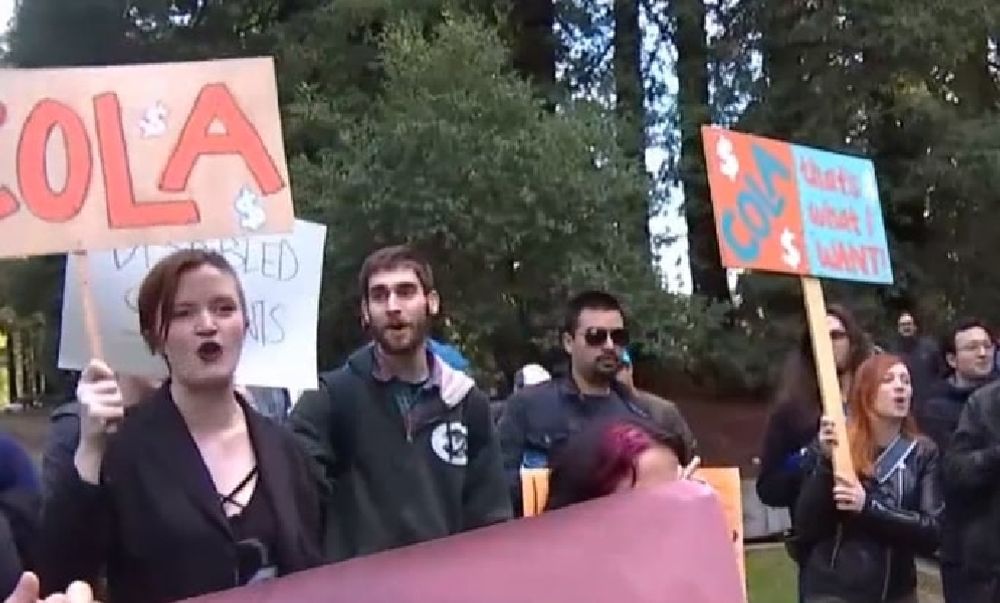 Graduate students from the University of California Santa Cruz decided to withhold final grades during their strike to demand a higher salary. Meanwhile, they protested by taking over the dining hall where they refused to pay for their food and encouraged others to do the same.

The group is demanding that all graduate students get a COLA, “regardless of residence, visa category, documentation, or funding and employment status.” In an effort to disrupt campus operations, the graduate student workers staged a protest at the Cowell/Stevenson Dining Hall on Dec. 11, according to a video on Reddit.

Cowell dining hall “No Swipe” does this infringe the interest of DH? from r/UCSC

The video shows multiple students yelling at people entering the dining hall, saying “no swipe,” encouraging students not to swipe their meal card at the hall. One person commented on the video, saying it was a “beautiful event” and said that “hundreds of enthusiastic undergrads receive[d] free meals.”

“UCSC grad students just took over a dining hall and are opening it to anyone who’s hungry because the university is starving its students and workers,” explained one Twitter user who also posted a photo of information allegedly being passed out at the dining hall shut down.

“We are here to eat, because we cannot afford to pay rent and to pay for a meal plan. We are here to eat to build community. We have been so busy organizing to eat that we haven’t eaten. So we are here to eat. We are asking you to not interfere," the handout in the tweeted photo reads.

At a Dec. 10 rally on campus, graduate students shouted “COLA in my bank account, cops off campus!” according to a tweet.

In response to the strike, the university sent out an email to faculty members on campus to address final grades, since the graduate students are on strike.

The UCSC campus Provost, Lori Kletzer, said that faculty members are responsible for submitting the final grades since they oversee the graduate workers.

Since some graduate students are refusing to hand over the necessary coursework to the professors in order to grade assignments, the provost said those professors should “contact their department chair.”

Some alumni of UCSC wrote a letter to Kletzer, stating that they are writing to “express our heartfelt solidarity” with the graduate students' demand of a $1,412 pay increase, and even said they will stop donating to the university until the demand is met.

“We pledge to withhold donations to UCSC until the UCSC administration agrees to pay the Cost-of-Living Adjustment of $1,412 a month to all graduate students,” the letter states. “We condemn any attempts by the administration to intimidate striking student workers or demonize their actions, and further demand that there be no retaliation of any kind against the strikers and organizers.”

According to the local NBC outlet, the teaching assistants on strike will release some grades but only for students who need them for financial aid.

Campus Reform reached out to UCSC but did not receive a response in time for publication.