Conservative students have launched a petition in opposition to the event.

A student group at Texas A&M is hosting a drag show. On Feb. 19, “Queens” who advance from the previous round of auditions are set to take the stage to compete for the title of “Queen of DRAGgieland 2020” in the Texas A&M campus theater. Texas A&M’s student group, MSC Town Hall, and the Gay, Lesbian, Bisexual and Transgender (GLBT) Resource Center of Texas A&M are partnering to host this event.

Texas A&M has long held the reputation of a “conservative” university due to its military, agricultural and mechanical roots. From 2012 to 2015, Princeton Review ranked Texas A&M as “#1 for conservatives” to attend.

In the Review’s most recent rankings, however, Texas A&M did not make the top 20.

Students claim that the university’s culture is changing. Political science student John Nollette wrote a statement to the university’s president “correcting the record about how ‘devoted the university is to tradition… Instead of [Texas A&M] trying to make everyone feel included, they have done as much as possible to address the concerns and desires of the minority students, while neglecting every other group on campus.”

“We are becoming more and more distant from Aggie values” senior Amber Follis told Campus Reform. “This event violates the dignity of a human person. There is way more to it than just singing and dancing.”

The petition, titled “Stop Draggieland,” was started to counter the event. It calls on the University’s President, Michael Young, and Vice President of Student Affairs, Dr. Daniel J. Pugh Sr, to immediately cancel DRAGgieland “for the protection of women and promotion of A&M's core values.” In three days, the petition had garnered more than 1,500 signatures.

“We are against Draggieland because it confuses people and their identity. It promotes the sexualization of the human person and goes against the values of our university,” reads the petition. “As students, we strive to live up to the university values and we expect the same from the university itself.”

“I am a [cisgendered] woman, and I love drag, and I do drag...I have never ever been to a show or performed at a show where anybody was disrespecting anybody," student and drag queen Casey Mackey told student paper The Battalion.

[RELATED: Drag queen prof ‘brings the nightclub to the classroom’]

The petition claims that the event is university-funded. This statement has been disputed by MSC Town Hall in a tweet saying the event is “being funded solely by ticket sales” and also by the advisor of the club in a comment to Campus Reform. Costs surrounding the event may include Monique Hart’s college visit fee of $8,500, security, venue charge, and advertising materials. Regular admission is $18 and VIP tickets are $37.

Catholic students joined by Tradition Family Property Student Action and Knights of Columbus are planning a protest on the night of the event. They have also held a rosary rally in the center of campus to encourage students to sign the petition and pray. One student who disagreed with the prayer rally took to Twitter to ask others “to link up and steal signs/snatch & throw away petition stacks.”

In response to the initial petition, a counter-petition has begun to circulate. In two days, “Stop Stopping Draggieland” accrued around 500 signatures.

“Draggieland [is] an event solemnly created to promote the little LGBTQ+ community [on campus] and diversify the campus as a whole,” notes the counter-petition. “The petition to stop draggieland is former out of pure transphobia and the very little trans community here does NOT deserve to be oppressed in 2020.”

Proponents of the event have expressed outrage on Twitter because of other students wanting to shut down the event. Emma Schaller, a Catholic student at Texas A&M, was doxed by having her address publicized (the tweet has since been deleted). When Campus Reform reached out for comment, Schaller said that she “never expected backlash to the extent of hate [she’s] received.”

“I expected people to disagree, but the fact that the left cannot disagree without berating my Catholic religion, conservative values and traditional femininity is discouraging for our political climate,” Schaller continued. “Drag shows are disrespectful to the dignity of women and I will never stop defending this truth with love.”

Proponents of the event shot back at Schaller’s claims on Twitter. Calling signers of the petition “garbage” and “fucking idiots” and also asking protesters to “show up to the parking lot outside of langford [sic] so [she] can personally beat [their] bitch ass up.” Some made videos expressing their hostility towards the protestors. Others attacked the Catholic church and Republican party. 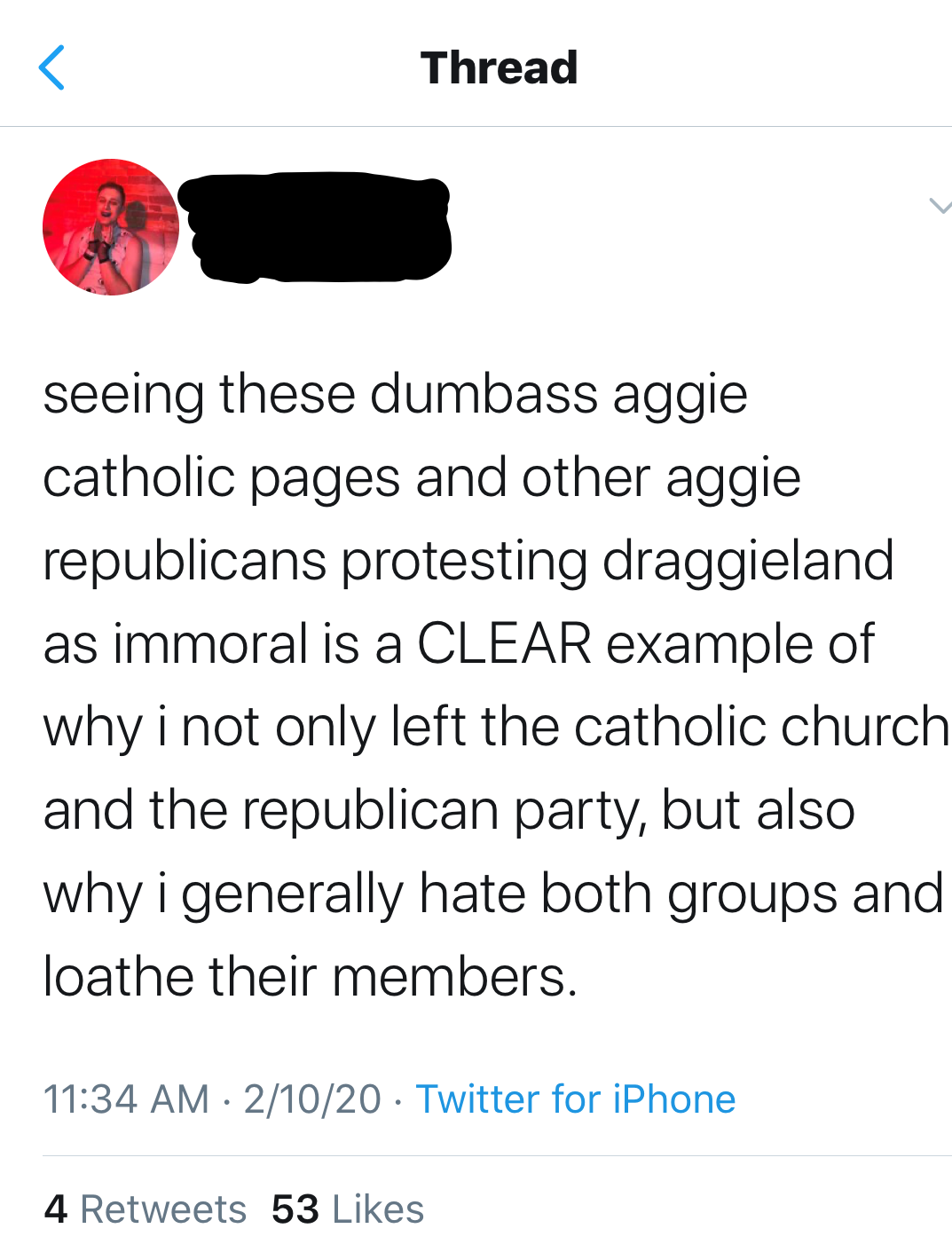 MSC Town Hall confirmed to Campus Reform that the event is now sold out. Seven hundred fifty tickets have been purchased, which is about one percent of the total student population of Texas A&M.

“The fact that a lot of Christians on campus, Protestant and Catholic alike, are willing to support a drag show reveal[s] the changing climate on campus in regards to faith, and [it] is deeply troubling,” student Brendan Cassell told Campus Reform. “It shouldn’t be controversial to say as a Christian you’re against drag shows but somehow it is.”

“As a Christian, conservative student, there are times when I do not feel like my concerns are valued or even addressed by the university,” Nollette wrote in his statement to Young.

Young and Pugh did not respond to Campus Reform’s request for comment.